Couple who were married for 52 years die of Covid just two weeks apart – after wife, 74, was only able to speak to her husband on Zoom as he lay dying in hospital bed

A couple who were happily married for more than half a century died of Covid-19 just two weeks apart.

Maria Emmott, 74, was only able to speak to her husband of 52 years, David, 76, via Zoom as he lay dying in a hospital bed from coronavirus.

She was rushed to hospital, where she was diagnosed with Covid-19. Maria died on November 1, two-weeks after her husband David.

Now their devastated granddaughter Catie Wells, who lived with the couple as a child, has paid tribute to the pair – who she said were ‘made for each other’. 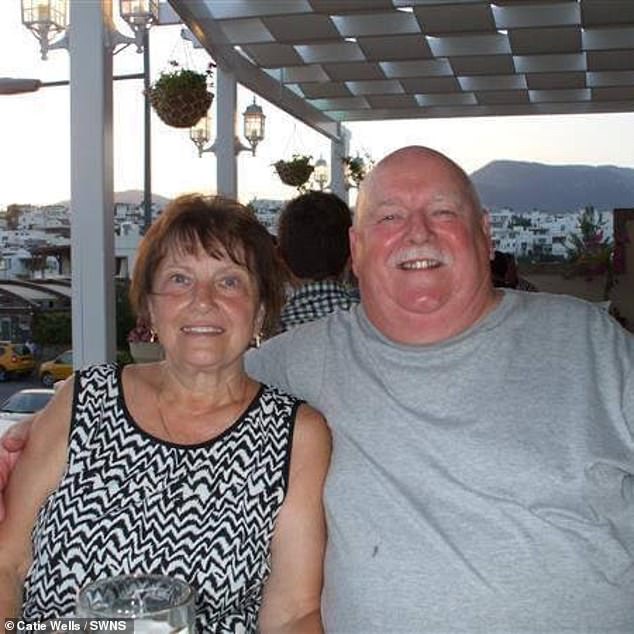 Maria Emmott, 74, was only able to speak to her husband of 52 years, David, 76, via Zoom as he lay dying in a hospital bed after catching coronavirus 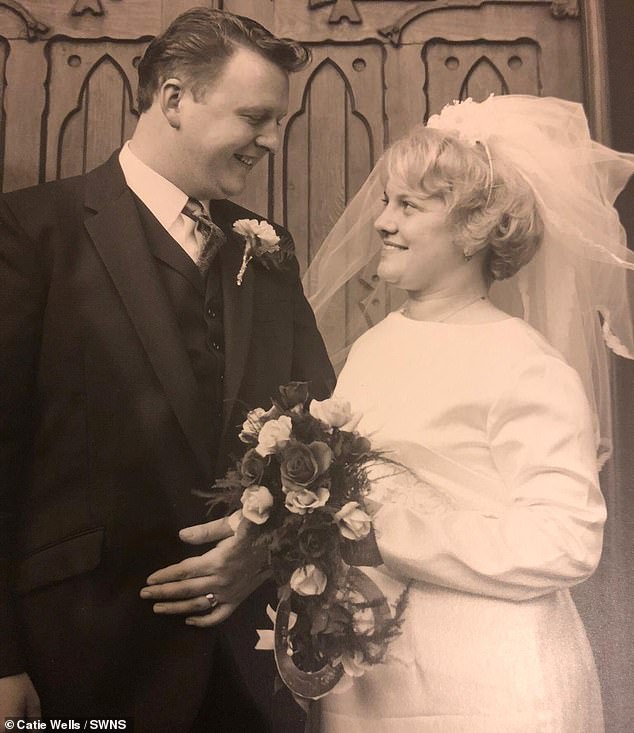 The besotted pair, who wed in 1968 (pictured), were buried in a joint funeral in their hometown of Oldham, Greater Manchester, with only close family and friends able to attend

Catie, 31, said: ‘It was just heartbreaking. They were like my mother and father.

‘I would talk to her (Maria) every day without fail, even if she was busy or having her tea, she’d let her food go cold and talk to me.

‘She was was everyone’s best friend, always there for everyone. They had two girls who only had girls and she always said ‘I’m proud of our girls’.

‘We could do no wrong in her eyes. Even if we’d done something wrong, she’d say “I still love you”.

‘My granddad said to nurses in the hospital “I love my girls”.

Great-grandparents David and Maria celebrated their 52nd anniversary in September by enjoying a drink together down a local pub. 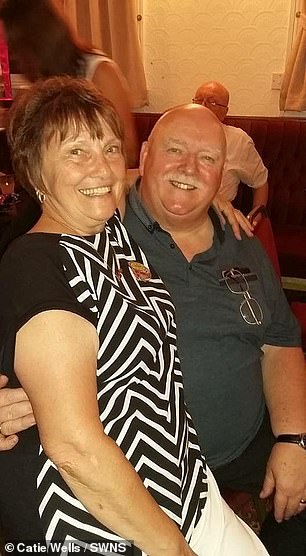 He had the flu jab a week earlier and showed no obvious symptoms, his family said.

The retired toolmaker died on October 18, after three days in intensive care.

After self-isolating for two weeks, he called an ambulance on October 15 because he could not breathe.

Catie and her auntie were able to visit David in the hospital. But Maria could only talk to him over a video call.

Just days after David’s death, Maria collapsed at home and was taken to hospital, where she too tested positive for Covid. She died on November 1.

The besotted pair, who wed in 1968, were buried in a joint funeral in their hometown of Oldham, Greater Manchester, with only close family and friends able to attend.

However, dozens of mourners lined the streets as the cortege passed Maria’s work place, Raven Mill factory, and their local boozer, the Dog Inn in Chadderton, on their final journey.

Catie added: ‘It was upsetting, but when the funeral cortege went past my grandma’s place of work, all the staff came out.

‘A lot of people turned out for them and clapped for them. It’s was nice to know they were so respected and loved by everyone.

‘My grandma did a lot for people, she would speak to everyone whether you wanted her to or not.

‘She always joking and smiling, she hated being alone and loved being around people. She would feed the homeless at her local church and she was there every week.

‘Granddad was a bit quieter but he had a great sense of humour and he was just so kind. He was a gentle giant, he never had a cross word with anyone.

‘They always put other people first.’

Maria, a keen bowler, was still working up until her death at a local factory and would regularly take part in fundraising events for charities. 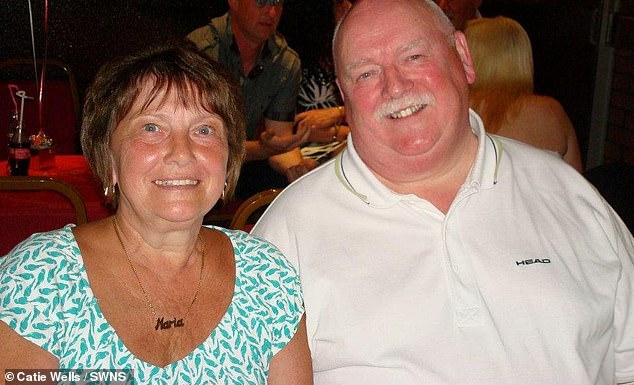 The couple loved travelling and enjoyed days out to watch TV shows being filmed at Media City in Salford.

Maria once even knew the Countdown Conundrum during filming, which Catie says was one of her proudest moments.

Catie added: ‘She loved it, she was so happy that she got the conundrum.

‘The contestants didn’t get it and they went to the audience and she put her hand straight up.

‘We still have the footage and when you watch it, you can see her chuckling to herself that she got it.’ 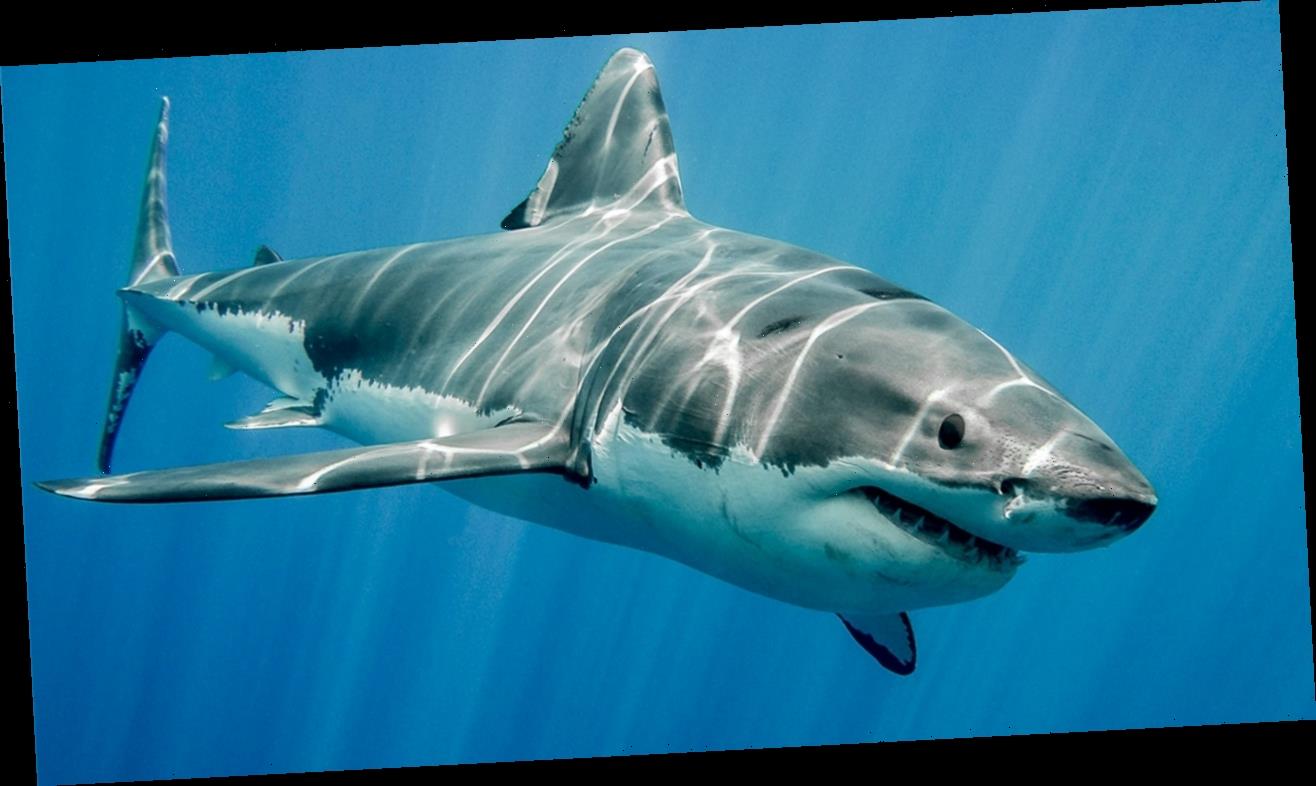