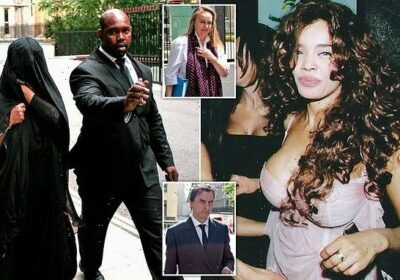 A multi-millionaire couple who claim they were ‘bankrupted’ by a fake Arabian royal dubbed ‘The Vamp in the Veil’ have lost their six-year fight to get her jailed.

Amanda Clutterbuck, 64, and Ian Paton, 53, claimed Sara Al-Amoudi passed herself off as the daughter of a Saudi billionaire and an Arabian ‘princess’ while conning them out of a £14million property portfolio of six flats in London’s West End.

The pair launched a high-profile court case against Ms Al-Amoudi in 2014, during which she became known as ‘The Vamp in the Veil’ and ‘Princess Moody’ after arriving at court in a Rolls Royce Phantom with HRH number plates.

She would sweep into the building flanked by minders and clad in a burka paired with five-inch platform heels.

The couple argued that far from being a Saudi Royal, she was in truth a former cocaine-using prostitute from Ethiopia who tricked Ms Clutterbuck and Mr Paton into transferring six luxury flats into her name.

Ms Al-Amoudi, by contrast, claimed Mr Paton had been her secret lover and that he transferred the properties to her to repay millions she had lent him out of suitcases brimming over with cash.

Ms Al-Amoudi denied ever having been a prostitute, which was accepted by High Court judge Mrs Justice Asplin when she dismissed the couple’s case against her in February 2014.

And the couple have now lost again in a High Court bid to force the police to reopen the case against her. 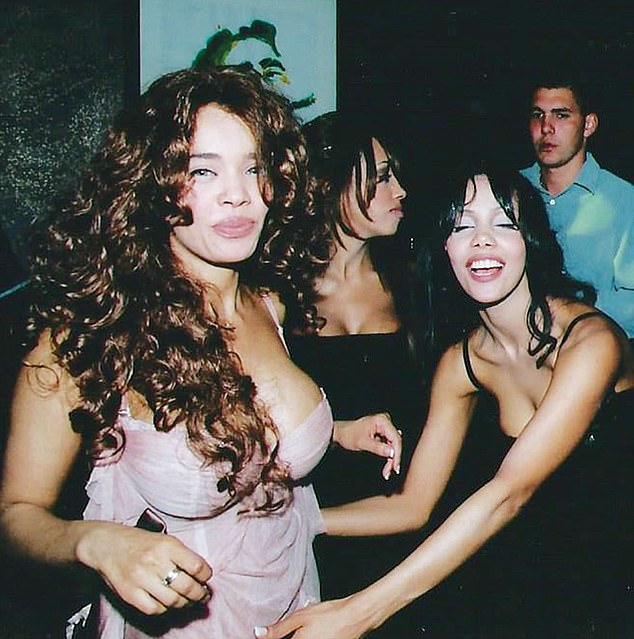 Sara Al Amoudi (pictured left) won the right to keep a £14million property empire – despite claims she is really a prostitute who invented her royal identity, claims denied by Ms Al Amoudi, which denial was accepted by the judge 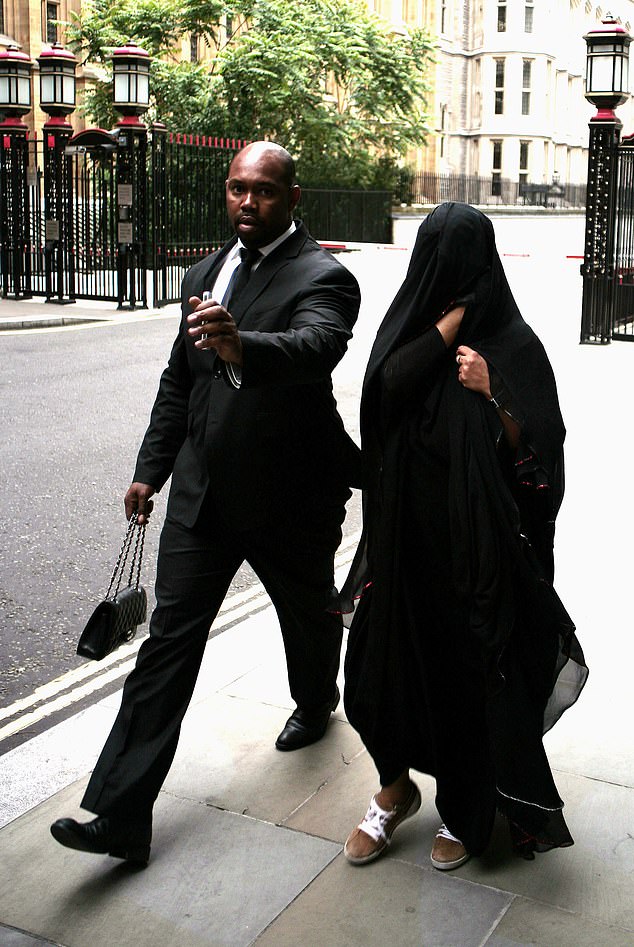 The pair launched a high-profile court case against Ms Al-Amoudi in 2014, during which she became known as ‘The Vamp in the Veil’ because she came to court in a burka flanked by security 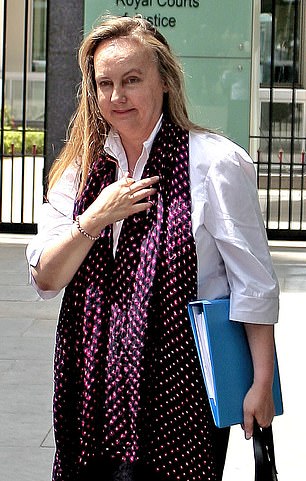 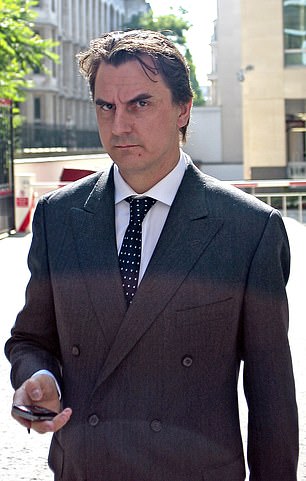 Amanda Clutterbuck, 64, and Ian Paton, 53, claimed Sara Al-Amoudi passed herself off as the daughter of a Saudi billionaire and an Arabian ‘princess’ while conning them out of a £14million property portfolio of six flats in London’s West End

Ian Paton and Amanda Clutterbuck insist she told them she was a Saudi princess with ‘limitless wealth’, and that she was keen to join a property venture they planned in the hope of making profits of £100million.

After she claimed she had millions ready to invest, they ‘temporarily’ transferred ownership of six flats worth £14million in Knightsbridge and Mayfair into her name. They say it was an attempt to speed up the deal. However, she then refused to give them back.

Al Amoudi, nicknamed ‘the Vamp in the Veil’ and ‘Princess Moody’, says the flats are rightfully hers.

She denies posing as a princess – yet was driven to court in a Rolls Royce with HRH plates, and entered the building in a veil surrounded by bodyguards.

Ms Al-Amoudi denied ever having been a prostitute, which was accepted by High Court judge Mrs Justice Asplin when she dismissed the couple’s case against her in February 2014.

And the judge backed her claim that the real estate was transferred into her name to pay off cash loans she made to Mr Paton while they were having a ‘clandestine relationship’.

Mrs Justice Asplin’s ruling wrecked the couple’s dreams of winning back their fortune, but for the past six years they have been campaigning to get Ms Al-Amoudi prosecuted and jailed for what they claimed were multiple acts of fraud and identity theft.

But they have now lost again in a High Court bid to force the police to reopen the case against her.

Despite the couple’s claims, at the end of the 2014 trial Mrs Justice Asplin found that Ms Al-Amoudi was ‘a woman of some wealth,’ with documents showing she had an offshore bank account holding £2m in cash.

She accepted Ms Al-Amoudi’s assertion that she had never referred to herself as a princess, but said she had claimed that at one point she had been married to ‘a member of the Saudi royal family’.

Ms Clutterbuck and Mr Paton never accepted the ruling of the court, maintaining that they had been conned out of all their wealth, and in 2016 began a campaign to get Ms Al-Amoudi prosecuted and jailed.

They ended up thwarted and angry however when in September last year the Met Police told them Ms Al-Amoudi would not be facing trial and that the criminal investigation was being closed for good. 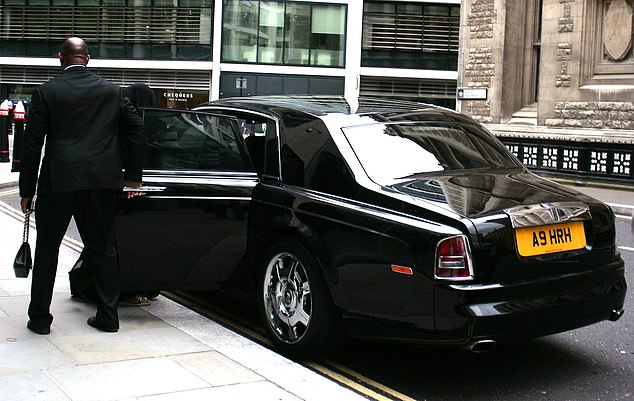 The Met had previously indicated its decision not to prosecute and that decision was confirmed after Ms Clutterbuck and Mr Paton exercised their formal ‘victim right to review’.

But the case returned to the High Court as the couple, along with Mr Paton’s brother, George, brought a last-ditch bid to have the police decision overturned by a judge through a judicial review.

George Paton, representing the couple as well as himself, told Judge Richard Hermer QC that Ms Clutterbuck and Mr Paton had been financially ruined and that their relatives have lost millions too.

‘They have lost their homes, they have been bankrupted. Their wider families have lost millions of pounds,’ he said.

‘The suspect (Ms Al-Amoudi) has stolen tens of millions of pounds of property and money. The loss of the victims is extraordinary,’ he claimed.

There was a stack of compelling evidence against Ms Al-Amoudi on which to base a prosecution, claimed Mr Paton, branding the police decision to close the investigation ‘irrational.’

One of the allegations against Ms Al-Amoudi was that she used a fake Saudi Arabian birth certificate to establish her credentials with the HSBC bank in 2008.

Mr Paton told the judge there was ‘admissible, cogent DNA evidence’ from a witness, which he insisted would prove Ms Al-Amoudi is not Saudi Arabian by birth.

He also claimed Ms Al-Amoudi had given false evidence before the Asylum and Immigration Tribunal and in court, adding: ‘she has ‘laundered’ her false identity with impunity through all of these courts.’

He also told the judge that police had concluded Ms Al-Amoudi was ‘unfit to be interviewed’ but said the Met ‘never took any steps independently to verify the suspect’s state of health or mental capacity’.

Mr Paton said the court was dealing with a ‘truly extraordinary case’ which involved ‘multiple crimes that meet the definition of ‘serious crime’.’

However lawyers for the Met said detectives who analysed the evidence had pointed out many legal and evidential obstacles any prosecution would face going to trial.

They highlighted the key fact that Ms Al-Amoudi had been exonerated in the fraud case brought by the couple at the High Court, where the standard of proof was far lower than in a criminal court.

Detectives handling the case had also pointed out that they had received no proper cooperation from the Saudi Arabian government when trying to pin down Ms Al-Amoudi’s true identity.

The police said there was insufficient evidence to prove Ms Amoudi was guilty of identity fraud.

The Met also said the CID lacked the resources to tackle the investigation in the circumstances, given its ‘scale and scope’.

After two hours in court, Judge Hermer rejected the bid to challenge the police decision, describing the couple’s case as ‘unarguable’.

He accepted the heavy toll the case has taken on Ms Clutterbuck and Mr Paton, saying: ‘the events have clearly had a profound impact on them; by events I mean not only the criminal behaviour they contend they have suffered from, but also their evident frustration at the failure to prosecute that individual’.

But any court would be reluctant to interfere with a police decision which had been taken after detailed analysis, he explained.

The Met had also given clear reasons for refusing to keep the criminal probe afloat, said the judge.

‘There was no freestanding obligation to set out a very detailed explanation in respect of each piece of evidence,’ he added.

‘The obligation is to provide information that enables a person to understand the basis of the decision in clear terms.’

And the final decision rejecting the right of review was not ‘perverse’ as claimed.

‘That was a decision that was open to them and not irrational or unlawful,’ the judge concluded.