Are there more conspiracy theories than usual? Are they supercharged by social media? Can we laugh them off as a fringe distraction from the real challenges of improving our world?

Yes, yes and no. Putting aside the entertainment value of a good conspiracy, the real challenge is to address their corrosive effect on fragile democratic institutions and to develop greater resilience. Trump's USA explains why it matters and where we do not want to be. 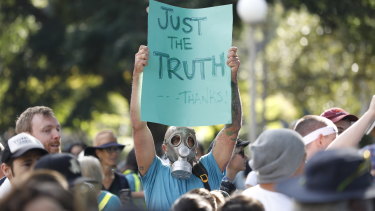 Distinguishing between conspiracy wholesalers and retailers is a vital first step. Retail conspiracists are at the end of the consumer chain and could be your neighbour, cousin, colleague or friend. Sometimes smart people believe stupid things.

Wholesalers are completely different. They are constructing fantasies and deliberately dividing communities to either enhance political reach or for financial gain. The stock exchange is full of them, as are the back rooms of political lobbyists. A believable lie is a valuable commodity.

Wacky theories about historical events have always been around: NASA faked the moon landing, The Beatles “George is dead”, JFK and the grassy knoll, and of course, 9-11 was an inside job – the most stubborn and pernicious of all.

The biggest problem in battling conspiracy theories is that some of them are correct. There are ample examples that governments and business often do manipulate and exploit the truth. There is a direct link between someone who thinks 5G spreads COVID and the failure so far to hold anyone to account for hotel quarantine or robodebt or paying 10 times too much for land near the new Sydney airport.

It is made easier to peddle a conspiracy theory when the lies about Saddam's weapons of mass destruction have never been dealt with. It is easy to believe that global Big Pharma withholds material that impacts our health when the scandals of Big Tobacco and asbestos are there for all to see.

If you want to nip the worst conspiracies in the bud you have to reassure the people that government is on their side. Political leaders need to govern knowing that each lie and every cover-up helps sow the seeds of their own demise.

Some conspiracies appeal because they offer a simple answer to difficult problems. The conspiracy theory becomes their tribal identity. Becoming empowered appeals to people who find it hard to feel empowered in other aspects of their life.

To disconnect people from cults or conspiracies requires understanding their lack of trust in authority. The single hardest group to convince about COVID-safe protocols are young men from working-class migrant backgrounds. This same coterie has the lowest trust in the police and anything to do with the state. They feel the dice are loaded against them. They do not consume mainstream media, they do not respect conventional authority figures and are prolific sharers of their rebellion online. Their interactions with government are mostly negative and they see little benefit in compliance. Their experience is not “I’m from the government and I’m here to help” it is “I’m from the government and I’m here to tell you what to do”.

It is futile to ask them to suddenly listen to the same authority figures who have been demonising, denigrating and marginalising them. Your prospects of high compliance are slim. You would not ask Peter Dutton or anyone in a uniform to front an ad about COVID targeting Muslim or refugee youth.

Compliance with authority is emotional and cultural, not rational nor logical. Indigenous Australians have experienced very much lower levels of COVID because of a successful community campaign, relying on messages from respected First Nations figures. You would not ask Pauline Hanson to front these ads.

Likewise, those in the media who have actively undermined the health messages have a lot to answer for. The ABC has served the nation well and been a popular destination for trusted, independent and reliable health information. I remind you that the Morrison government is starving it of funds regardless.

If civil society is to emerge stronger from this pandemic we need to understand how deeply the foundations have been shaken.

Jon Faine is a former presenter on ABC 774.