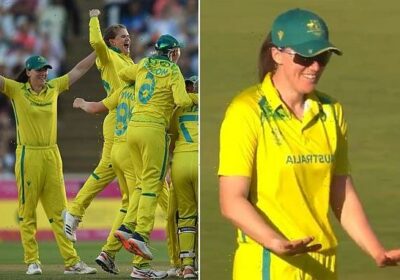 Australia’s decision to field a cricketer with Covid-19 at the Commonwealth Games has sparked controversy and claims of hypocrisy given the country’s hard line on lockdowns and vaccinations during the pandemic.

Tahlia McGrath was permitted to play at Edgbaston in Birmingham yesterday despite testing positive. She bowled and batted in the match and also took the catch that dismissed India’s star opener Shafali Verma as the Southern Stars took gold.

She batted at No4 without a mask before she was dismissed after scoring just two runs off four balls. McGrath then bowled two overs for 24 runs and also took a catch, when she held up her hands to warn her fellow players not to come and celebrate with her.

Had the match been played in Australia, McGrath would have been forced to isolate for seven days. But in the UK, where self-isolation rules are advisory only, Ms McGrath could play.

She had woken up with mild symptoms yesterday morning and then returned a positive test. However, she was still selected in the Aussies’ XI after tournament organisers approved her participation following consultations before the toss, which was delayed.

McGrath did not line up with her team-mates during the pre-match national anthems and did not join them in the dugout while they were batting, instead sitting in the stands wearing a mask. After taking part in the match, Tahlia wore a mask at the medal ceremony and as she celebrated gold with her teammates on the podium, where she had her arms around Beth Mooney and Alana King.

She is understood to be the first player known to have Covid to take part in an international cricket match, with Birmingham allowing each positive athlete to be assessed on a case-by-case basis.

But critics have said she should not have been allowed to play. Many Indian supporters felt the decision was ‘racist’ and that India would have been ruled out of the final if the shoe was on the other foot.

There were also claims of hypocrisy by the Australians, given their very hard line on lockdowns and vaccination to slow the spread. Their strict rules led to Novak Djokovic being excluded from the Australian Open tennis and deported – despite him not having Covid-19. Former prime minister Scott Morrison even spent $2billion of taxpayers’ money on quarantine facilities now scattered around Australia that sit unused and empty.

One Australian tweeted that McGrath’s participation ‘makes a mockery of all the isolation we had to endure for the last three years’. 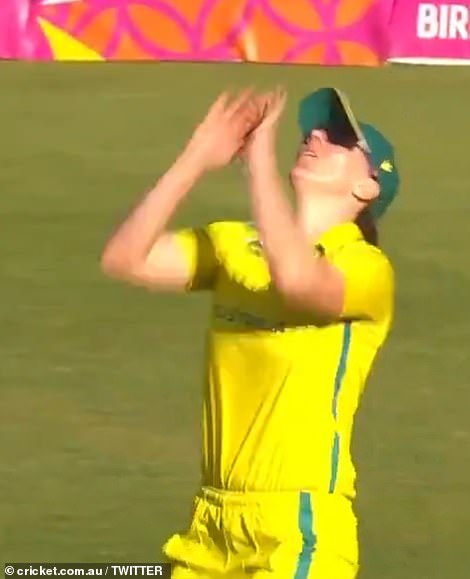 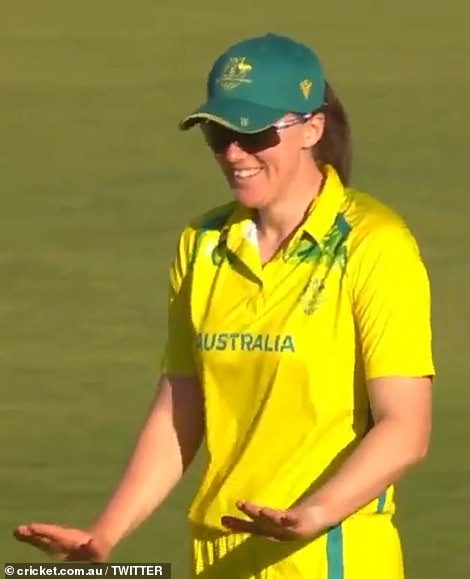 Tahlia McGrath takes the catch (left) that dismissed India’s star opener Shafali Verma as the Southern Stars took gold. She warned her teammates not to come to celebrate with her (right) 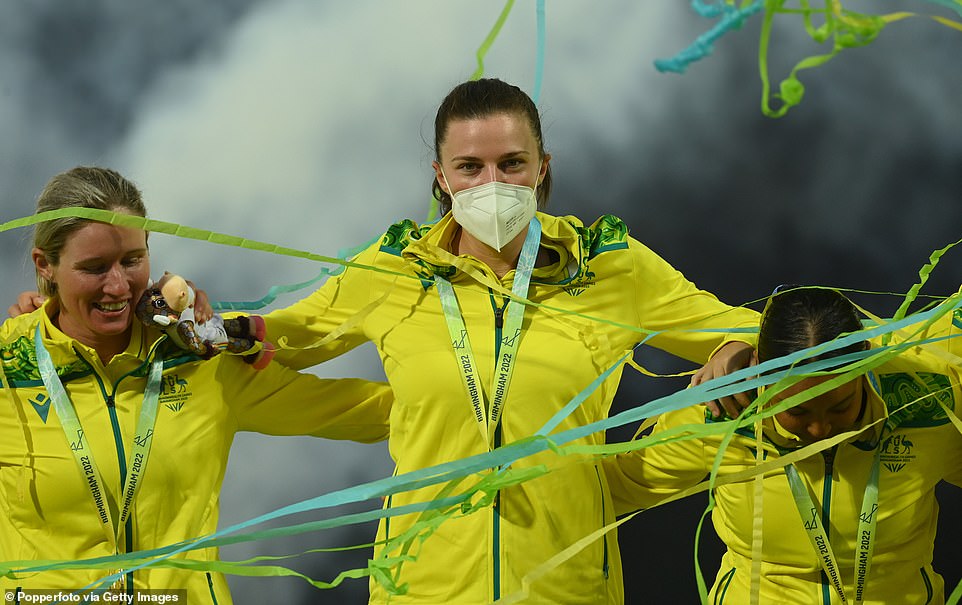 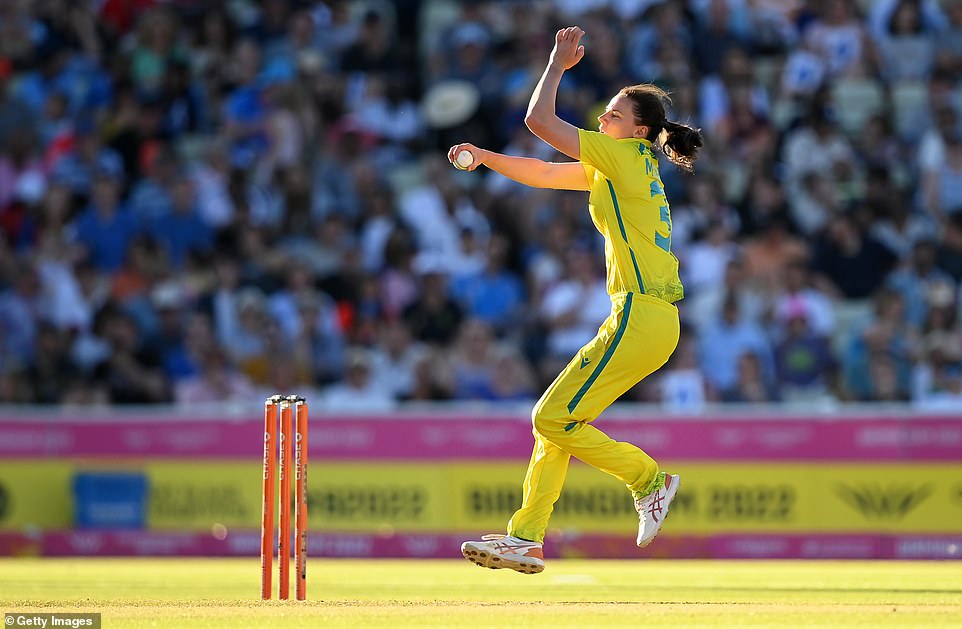 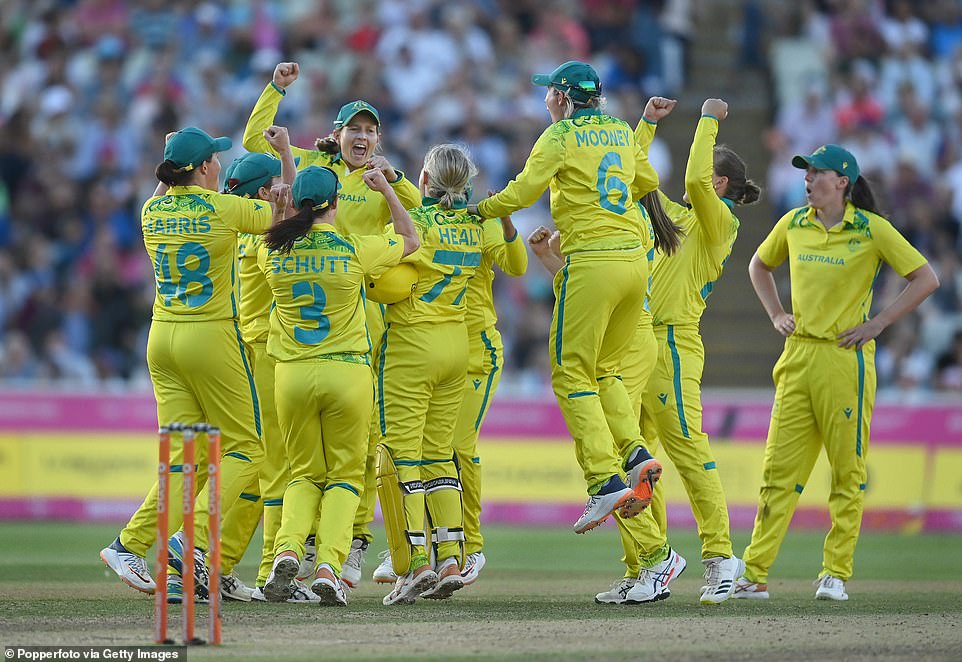 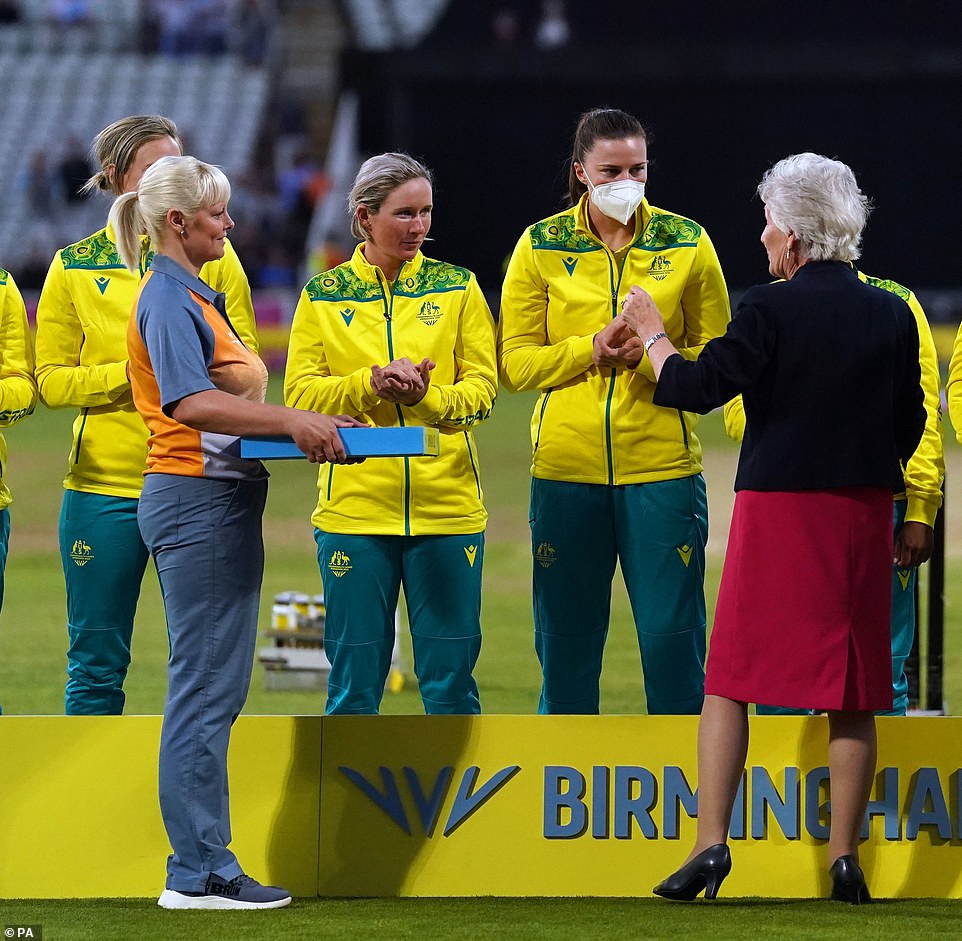 McGrath receives her medal whilst wearing a mask at Edgbaston. She was allowed to play but had to sit away from her teammates 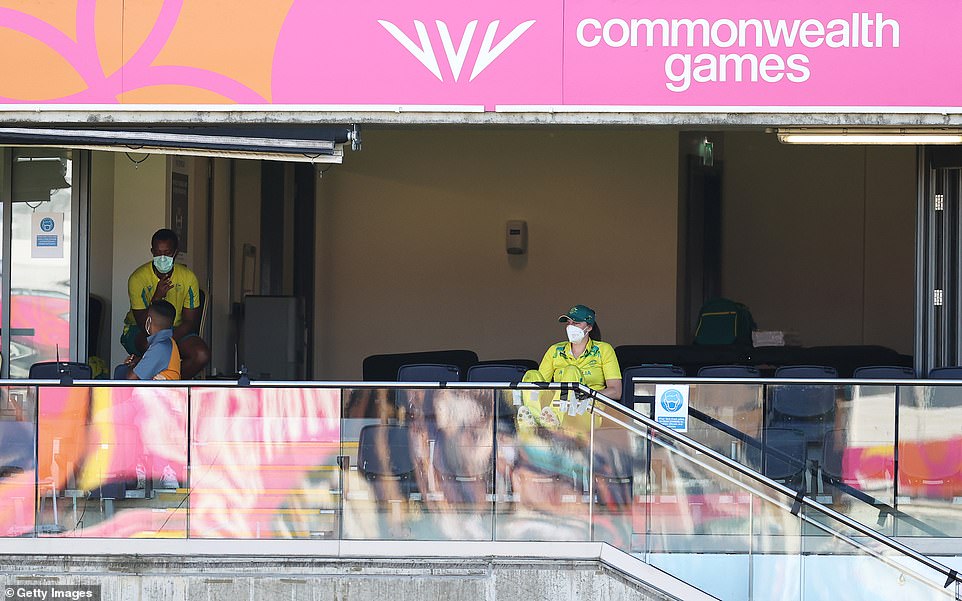 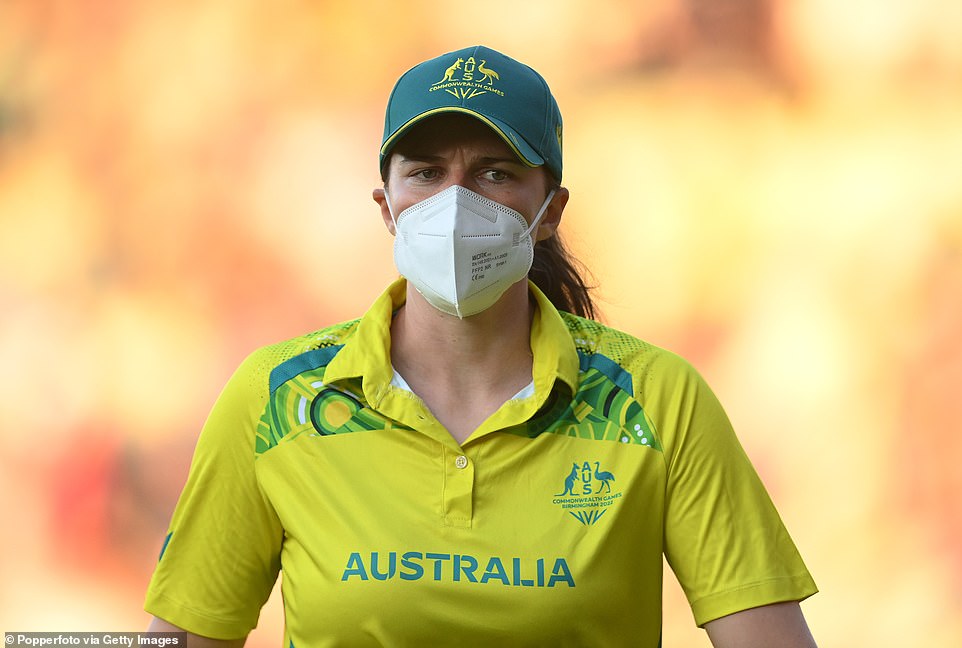 The toss was delayed as officials discussed whether allrounder Tahlia McGrath would be allowed to play, having returned a positive COVID-19 test 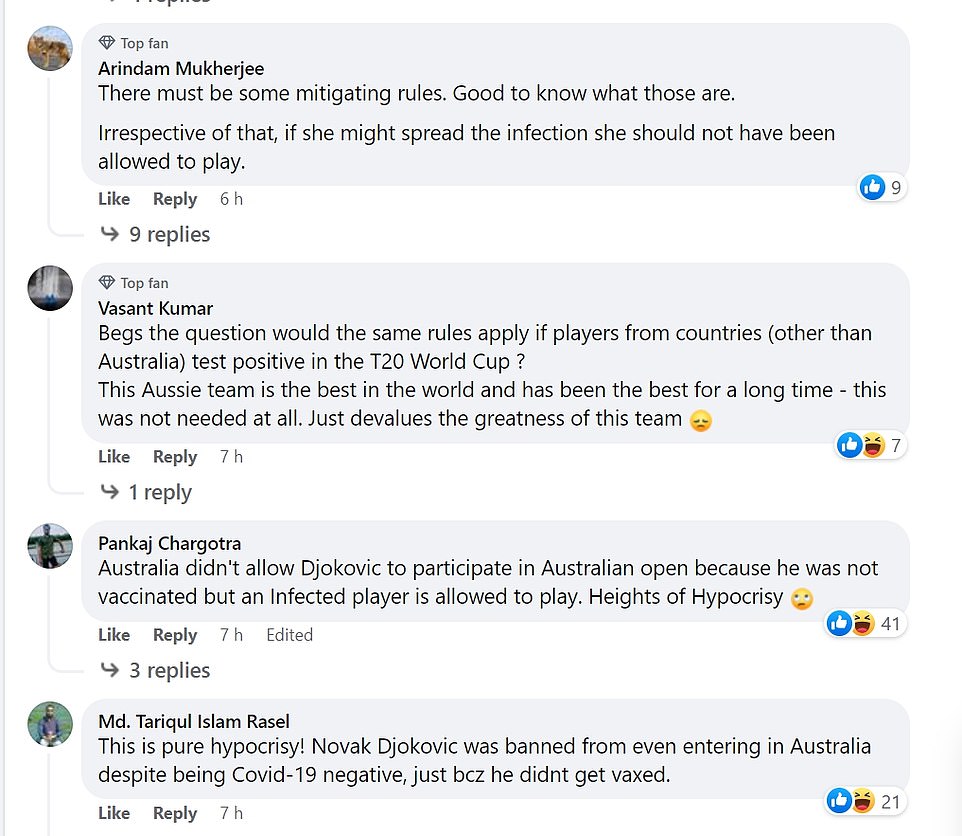 Fans were unhappy that the Australians let McGrath play

Australia won the first-ever women’s cricket gold after posting 161-8 from their 20 overs, then bowling India out for 152. McGrath stood on the podium with her team-mates again wearing a mask.

Opener Beth Mooney – who made 61 runs off 41 balls – said: ‘It’s a real shame that in elite sport you get publicly shamed for having Covid when over here probably 90% of the people in this room have it right now. No-one’s testing, no-one’s doing anything. It’s just a real shame she couldn’t celebrate with us, but at the same time I think the right decision was made in terms of letting her play. Hopefully people aren’t too upset about it’.

Australian bowler Megan Schutt said: ‘We didn’t want to get in trouble, we felt bad for Tahlia at the end there. Obviously when you’re part of a game that’s so thrilling like that, that’s all you want to do [is celebrate] and at the end screw it, if we get Covid, so be it’.

Indian captain Harmanpreet Kaur said they found out about the positive covid test just before the toss. She said: ‘That was something not in our control. The CWG had to take a decision and we were okay with it since she [Tahlia McGrath] wasn’t very ill, so we decided to play. We had to show sportsman spirit. I’m happy we didn’t say no to Tahlia, it [missing the final] would have been very hard-hitting for her.’

Sports reporter Naveen Sharma slammed the move as ‘shameless’ in a Tweet: ‘Australians always preach about right or wrong but they forget everything when it comes to them.’

‘Tahlia McGrath tested Covid positive. Yet she was allowed to play. Basically, all rules go haywire when Australia and England play. Imperialist mentality at its very best,’ posted one angry fan.

‘How racist they are. Imagine same happening with any Asian player they wouldn’t have allowed at all,’ said another.

‘If the same would happen with Asian team the match would have been abandoned and opposition would get the gold,’ another posted.

‘How could this be possible… The umpires already stole the women’s hockey semi-final from India too against Australia with bad umpirism, too much favouritism for Australia,’ posted another.

A number of cricket fans pointed to Australia refusing to let tennis champion Novak Djokovic play in the Australian Open and called us hypocrites for allowing McGrath to play.

‘So Australia can deny Djokovic from playing in the Australian Open for not being vaccinated but will allow a Covid +ve [sic] person to play a cricket match? And what is the point of testing if a Covid positive person can still play?’ Mantavya asked in online commentary.

It wasn’t just Indian supporters shocked and appalled by the decision, with many Australian fans questioning the decision as well.

‘The team they played against should appeal to health organisation it’s highly dangerous and not legal to endanger others health. Australia would be up in all sorts if it was other way around especially if we lost,’ one Aussie fan posted.

‘Absolute rubbish! Shouldn’t be anywhere near others if she has it and India should refuse to play as a positive puts you out for everyone else. Why is it suddenly ok now?’ posted another.

‘This is strange. A positive test rules you out of contention. What if India refuse to take part on health grounds?’ another said.

Australia held on to win by nine runs despite a brilliant knock by Indian skipper Harmanpreet Kaur, adding Commonwealth gold to World T20 and ODI success for this all-conquering side. 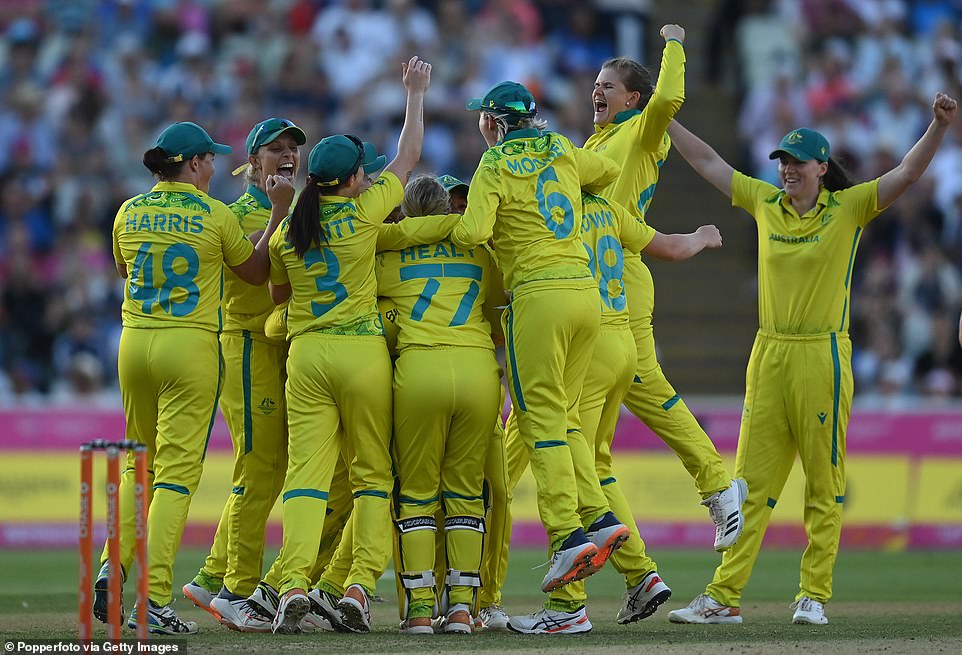 Australia held on to win by nine runs despite a brilliant knock by Indian skipper Harmanpreet Kaur, adding Commonwealth gold to World T20 and ODI success for this all-conquering side 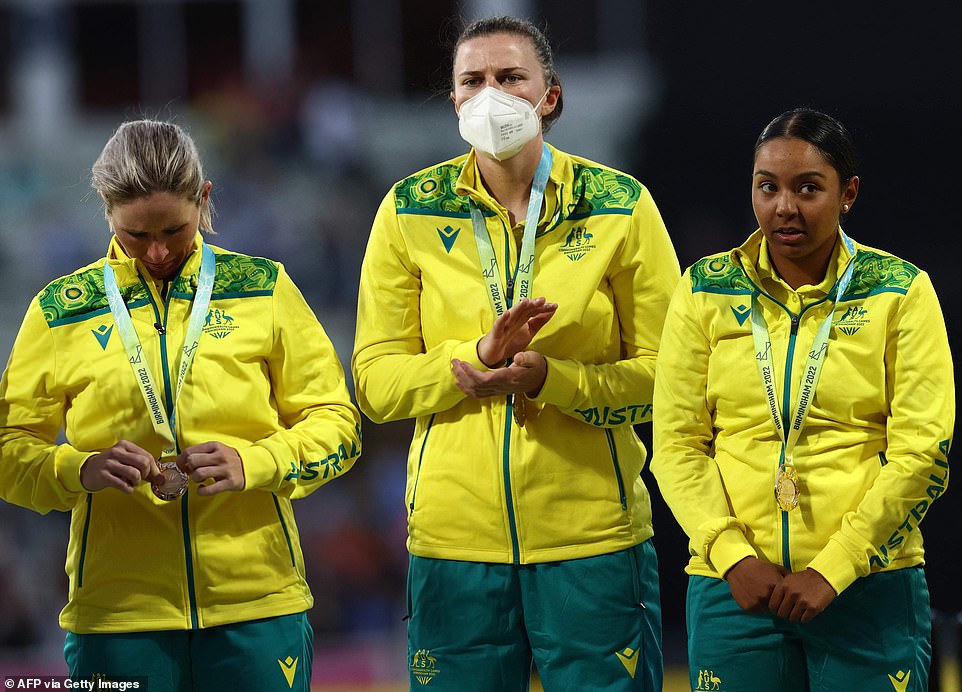 McGrath (C) wearing a face mask, stand on the podium during the medal ceremony 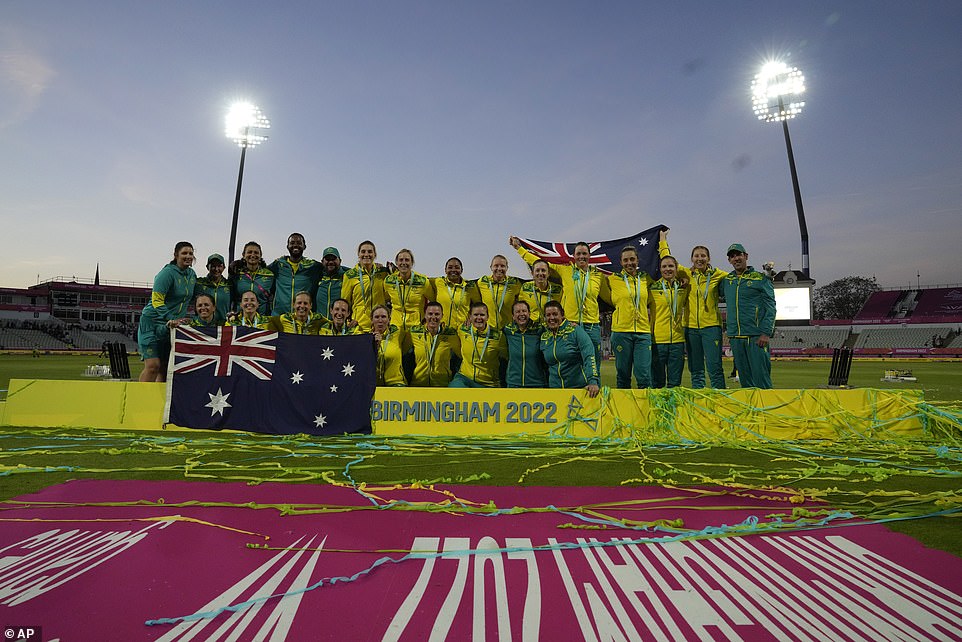 Ash Gardner, the hero with the bat when Australia beat India to open the tournament, this time starred with the ball, taking 3-16 off three overs – including the match-turning wicket of Kaur.

After winning the toss and opting to bat, Alyssa Healy again failed to fire, out lbw for seven, but skipper Meg Lanning joined Beth Mooney for a 74-run partnership off just 47 deliveries.

Australia were looking comfortable, before a double piece of brilliance from Radha Yadav dragged India back into the contest.

First Yadav flicked the ball between her legs to catch Lanning short of her ground for 36 after backing up to far, before she plucked a diving catch off McGrath to dismiss the Australian No.4 in the next over.

Gardner pounded a quick-fire 25, but it was Mooney (61 off 41) who was holding the innings together before she was dismissed by a brilliant Deepti Sharma catch.

Sharma stuck out a hand to take a one-handed stunner.

After staring down 180-plus, Australia fell away towards the end and managed just 11 runs off the final two overs and reached 8-161.

India smacked 12 runs off the first over in reply but lost two quick wickets, with Darcie Brown bowling Smriti Mandhana behind her legs before Shafali Verma wasted her extra life to fall for 11.

But enter Harmanpreet Kaur, the Indian skipper looking like she would carry India to the gold medal on her own as she struck a brilliant 65 off 43 balls before holing out in the deep as Gardner picked up two wickets in two balls.

A Grace Harris direct hit helped stymie India as they were left needing 11 runs off the final over, but it only lasted three balls as Jess Jonassen claimed the final wicket to spark wild celebrations.