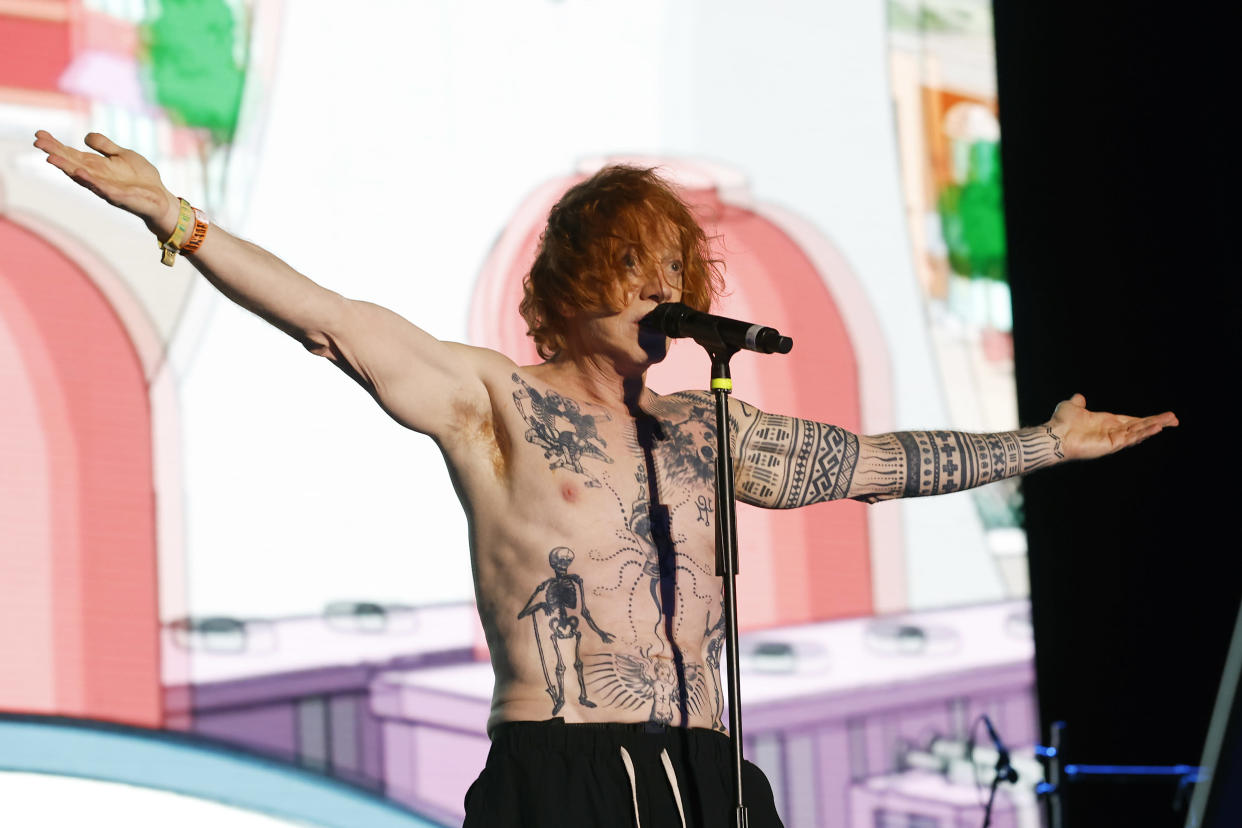 Three years ago, a 17-year-old rising artist named Billie Eilish stunned with a career-making “#Billiechella” Saturday set on Coachella’s second stage, during which she modestly told the packed field, “I don’t deserve this at all!” Since then, much has happened: Eilish has won seven Grammys and an Oscar and has become the voice of her generation, and of course, Coachella has been on hiatus due to the COVID-19 pandemic.

This weekend, as both Eilish and the Coachella Valley Music & Arts Festival itself returned to Indio’s Empire Polo Club for the first time since 2019, Eilish had arguably the best slot of the entire lineup — this time headlining Saturday’s main stage — but she remained as humble as ever, insisting, “Dude, this is so weird! I should not be headlining this s***!” Eilish even relinquished her set’s biggest moment to a Coachella elder statesman, Blur’s Damon Albarn, whom she credited with changing her life.

At age 20, Eilish added another achievement to her ever-lengthening résumé Saturday, as she became the youngest headliner in Coachella history. But there was another elder statesman making an even more triumphant return of sorts: legendary former Oingo Boingo frontman-turned-film composer Danny Elfman, whose epic “Boingo to Batman and Beyond” Outdoor Stage set marked, as he put it, “My first time onstage as ‘myself’ in 27 years.”

Elfman, who at age 68 was the oldest artist playing the usually youth-obsessed Coachella festival this year, does occasionally perform with orchestras — notably at his famous Nightmare Before Christmas symphony shows, which actually featured a cameo by Eilish as that beloved Tim Burton film’s Sally last Halloween season. But he has refrained from playing regular rock concerts for nearly three decades, due to his severe tinnitus. In fact, in 2014 he told Yahoo Entertainment, “When I stopped doing Oingo Boingo, I knew that I would never get on that kind of concert stage ever in my life again without totally destroying my hearing — what was left of it.” However, after releasing the dystopian lockdown opus Big Mess (his first solo album since 1984) in June 2021, Elfman seemed newly inspired and finally ready to emerge from semi-retirement. 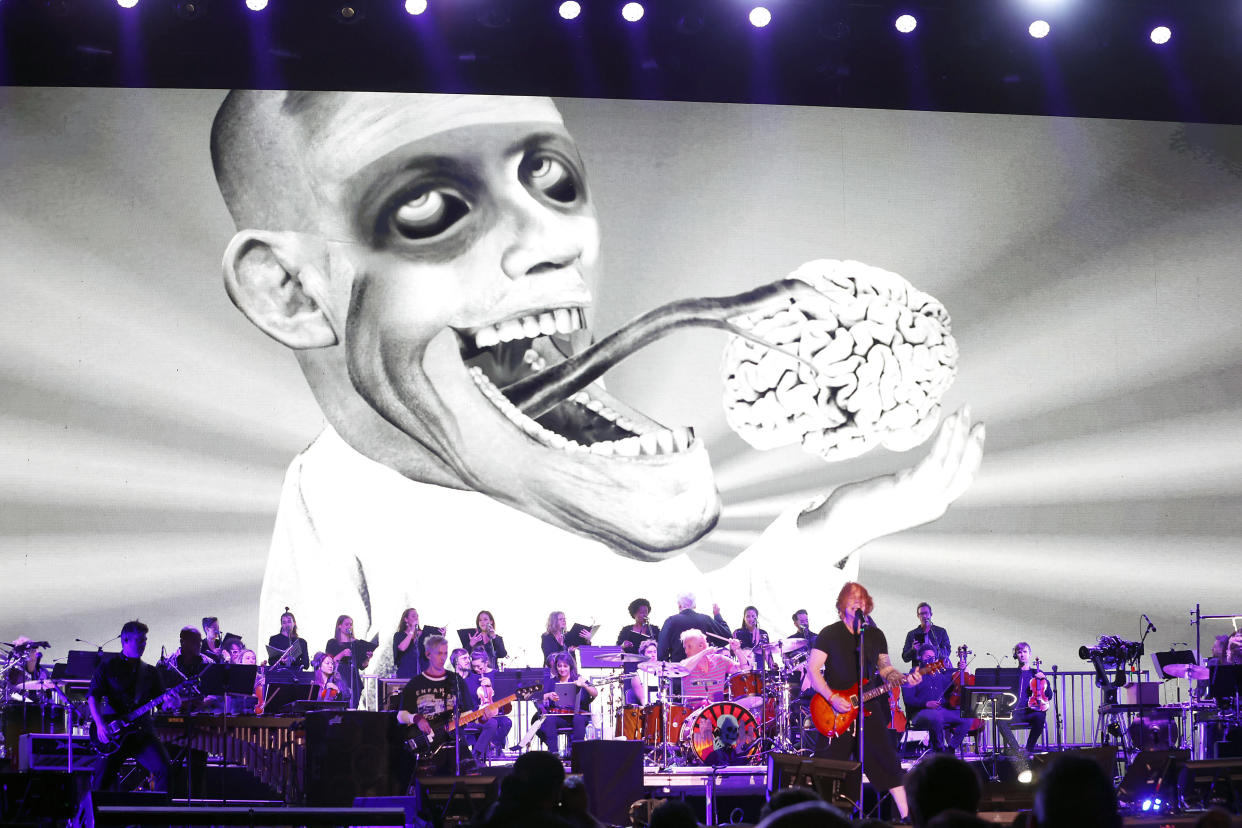 “My name’s Danny Elfman, and I’ve got a strange little show for you,” the new wave pioneer devilishly announced Saturday, taking the Outdoor Stage in a black T-shirt (which he later shed to reveal an impressively chiseled physique and full torso of tribal tattoos) and cargo shorts, looking like a carrot-topped version of his recent collaborator and rocker/composer successor, Trent Reznor. And it was a very strange, downright bonkers show indeed — but it was far from “little.” Accompanied by a grand orchestra plus a hard-charging, nu-metallic band that featured Limp Bizkit guitarist Wes Borland, Vandals/Devo/Guns N' Roses/A Perfect Circle drummer extraordinaire Josh Freese, and his longtime screen collaborator and former Boingo bandmate Steve Bartek, the prolific Elfman careened wildly from mood to mood and decade to decade — proving that no one has quite had a career like this redheaded genius.

Can we talk about how cute this Steve bartek and Danny Elfman moment was 😭 pic.twitter.com/dKttnI76mW

There was the relentlessly nihilistic, creepy-crawly Big Mess bombast of “Sorry,” “Insects,” “Kick Me,” “True,” “Happy,” and the still-quite-topical “Love in the Time of COVID,” all accompanied by screensaver-from-hell collage graphics of puppet Trumps, stick-figure zombies, funhouse-mirrored monsters, deformed dolls, and melting rubber Elfman faces to match all the face-melting avant garde audio. But then Elfman would sweetly, fondly gaze up at the stage’s big screen to watch, along with the rest of the audience, as lovely live orchestral pieces accompanied some of his most iconic film and TV compositions — including the Spider-Man main title; “Breakfast Machine” from his quirky first film score, Pee-wee's Big Adventure; “Ice Dance/The Grand Finale” from Edward Scissorhands; “Alice's Theme” from Alice in Wonderland; and the movie theme that truly launched his composing career, from Burton’s Batman. Screen-centric set highlights also included Elfman’s adorably demented Jack Skellington vocal on The Nightmare Before Christmas’s “Jack's Lament/This Is Halloween/What's This?” (during which he crowd-pleasingly shouted out “Coachellatown”), and an unhinged hardcore remake of his enduring Simpsons theme.

WHO THOUGHT THE SIMPSONS THEME AT COACHELLA WAS A JOKE??? NEVER UNDERESTIMATE DANNY ELFMAN#coachellapic.twitter.com/HOu2OdbD7I

Nightmare Before Christmas live on stage at #Coachella during Danny Elfman’s set pic.twitter.com/0MlP0tlROX

Danny Elfman watching over his masterpiece as it plays (The Original Batman 89’Theme) #Coachellapic.twitter.com/J5Y8XAgoNX

But for Coachella-goers of a certain age who grew up in nearby Los Angeles, where Oingo Boingo was pretty much the house band of trailblazing alternative rock radio station KROQ for years, hearing Elfman perform nervy new wave Boingo tracks for the first time since the ‘80s — “Nothing to Fear (But Fear Itself),” “Just Another Day,” “Insanity,” “Only a Lad,” “Who Do You Want to Be,” the Halloween classic “Dead Man's Party” — was perhaps what made this set so historic. And perhaps it won’t be years before Elfman plays those songs again. As he left the cheering crowd, he told them, “Thank you for bringing me out of… whatever it’s called, I forget,” stopping short of using the word “retirement.” He then added, “Thank you. I like it here.”

Back over on the main stage, the above-mentioned Eilish was joined by Khalid (who’d also just made a surprise cameo during Disclosure’s Saturday set) for a gorgeous performance of “Lovely,” then brought out above-mentioned Coachella veteran Albarn, of Blur/Gorillaz fame (bringing new meaning to her phrase “the world’s a little Blur-y”). While many of the young concertgoers didn’t seem to recognize the Britpop star when he first sauntered out, unassumingly and unbilled, to duet with Eilish on “Getting Older,” she enthusiastically demanded that they give him the respect he deserves.

“This is the craziest s*** I’ve ever experienced. This man changed my life in a lot of ways, and changed my complete view of what music could be and what art could be and what creation could be,” Eilish declared. “My first favorite band ever was the Good, the Bad & the Queen [Albarn’s supergroup, which played Coachella in 2007, featuring the Clash’s Paul Simonon of the Clash, the Verve’s Simon Tong, and Fela Kuti drummer Tony Allen]. I was 6 years old. And Blur changed the world. And f***in’ Gorillaz changed the world. And this man’s a genius, and that’s that.” Eilish and Albarn were then joined by De La Soul’s Posdnuos for a rousing rendition of Gorillaz’s festival staple “Feel Good Inc.” — although Eilish mainly just watched them as a fan would, giddily singing along in amazement.

After Albarn exited the stage, a dazed Eilish gasped, “You don’t understand how much Damon means to me! I feel like I’m dying.” And the admiration between Eilish and 53-year-old Albarn is clearly mutual. Earlier this year, in an L.A. Times interview that went viral for all the wrong reasons when Albarn questioned Taylor Swift’s songwriting skills, he also praised the “exceptional” Eilish and her brother/collaborator Finneas as “really interesting” modern pop songwriters, explaining that her music is “just darker — less endlessly upbeat. Way more minor and odd.”

As Eilish wrapped her 90-minute show, she was still humble, sheepishly apologizing for not being 2018 Coachella headliner Beyoncé. Interestingly, Eilish’s main stage set was preceded by Beyoncé’s “Savage Remix” collaborator Megan Thee Stallion, who controversially lost the 2021 Record of the Year Grammy to Eilish amid Eilish’s own protests. Megan’s fiery set (packed with sex-positive Hot Girl anthems like “Freak Nasty,” “Body,” “Eat It,” “WAP,” “Sex Talk,” and “Big Ole Freaks”) was headliner-worthy in its own right, at least warranting co-billing, as she “turned this up like it’s motherf***ing 2019,” twerking and spitting rhymes with as much ferocity as the sandstorm whipping up the Empire Field grounds.

The highlight of Megan’s brash and breathless hour-long show was the premiere of a feisty, Jodeci/Wu-Tang Clan-sampling new dis track, “You’s a Bitch,” which she introduced as “very motherf***ing personal to me, and it’s to who it motherf***ing may concern!” This 10 p.m. performance was Megan’s official Coachella debut, but judging from how wildly the audience reacted to her new song, it’ll be the hit of Hot Girl Summer 2022 — and she’ll probably be playing it again when she deservedly headlines Coachella 2023.

But before then, there’s one more day of this year’s Coachella fest, Sunday, as Billie Eilish’s brother Finneas plays an Outdoor Stage solo set and Swedish House Mafia and the Weeknd swoop in to save the day after Eilish’s recent nemesis Kanye West pulled out of the lineup.