Christmas fanatic splashes out £26,000 on decorations Christmas fanatic splashes out £26,000 on decorations – almost as much as his house is worth

A Christmas fanatic has splashed out more than £25,000 on decorations and lights outside his home – which nearly cost as much as his house.

Thomas Wheatley, 24, created the display at his parents three-bedroom home in Birmingham, which was bought for £30,000 nearly 30 years ago.

Mr Wheatley first put up the decorations with his mother 14 years ago and has been helping ever since. 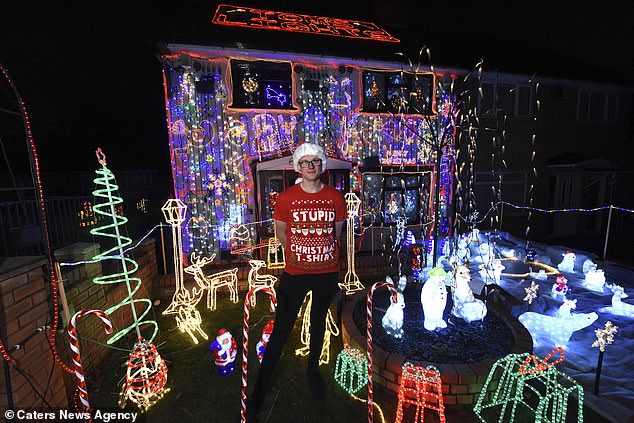 Thomas Wheatley, 24, stands outside his family home with the hi-tech Christmas decorations

The family spent a huge £15,000 one-off payment for the light and spend an additional £775 a year on average on electricity bills and maintenance – putting the festive lights spend to date at £25,850.

Mr Wheatley said: ‘I started helping out with the light shows at my mum and dad’s house when I was about 10 years old, 14 years ago.

‘My parents used to do the exact same thing, so as I got older I wanted to do it too, which has now become a tradition I like to stick to.

‘My mum started doing it when I was young, but the more I watched her the more hooked I got, I just kept buying more.

‘We use homemade decorations which we make together that we add to our display, I think that and the high tech element separates our display from any others.

‘We like that it brings joy to the community, but an added bonus is how it helps raise money for important causes, which is why the cost doesn’t matter to us.’ 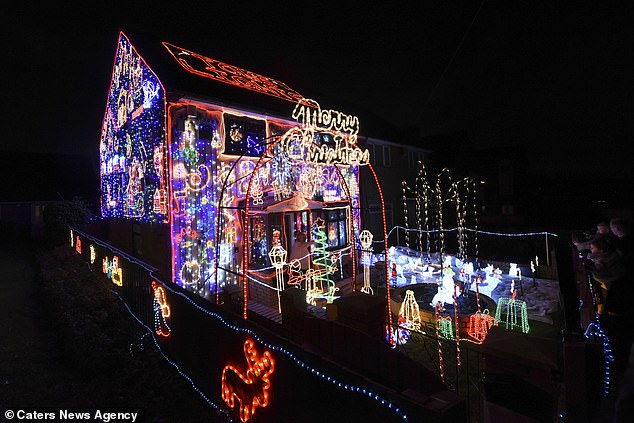 Mr Wheatley said what separates their display from the rest is just how technology-driven it is.

The lights are on a timer which automatically starts the show, which runs between 4.30pm to 9.30pm every night throughout the Christmas period.

And the display is programmed to the control of the music he plays to make sure the sounds and lights are perfectly in sync.

Each year, Mr Wheatley said the property has plenty of admirers looking at the home – and his neighbours seem to love his efforts.

Mr Wheatley said: ‘So far I haven’t had any complaints from anyone.

‘One of my favourite parts of the night is during the switch on and seeing all the people take photos and hearing them cheering after the countdown.

‘It’s also great when strangers come and tell me what a great job I’m doing for the community.’

Mr Wheatley loves to put the lights to good use by raising cash for worthy causes with an opening night switch-on and this year is donating the proceeds to mental health charities.

He said: ‘This year Iwant to raise as much money as possible for mental health.

‘I want everyone to come and see my display, and thank my community for making all of this possible.’ 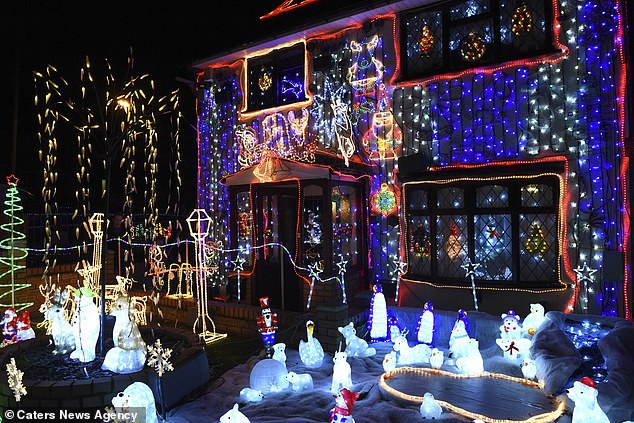