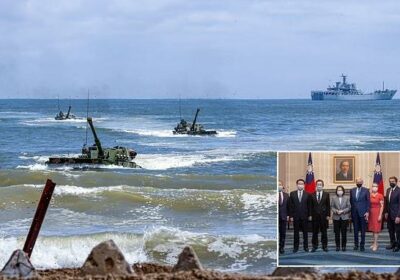 Taiwan’s ministry of defence tweeted shortly before midday (7pm Sunday local time): ‘We condemn PLA for jeopardizing the peace and security of our surrounding region with announcements of military drills.

‘[Taiwanese] armed forces monitor activities around our surrounding region and respond to every situation with professionalism to protect our country.’

The latest spike in tensions comes days after a similar trip by House Speaker Nancy Pelosi triggered an irate response from China.

This week’s unannounced two-day trip by senior members of Congress prompted China to repeat its vow that it would ‘prepare for war’ over Taiwan.

‘We warn the US and [Taiwan’s ruling DPP]: ‘Using Taiwan to contain China’ is doomed to failure.’ 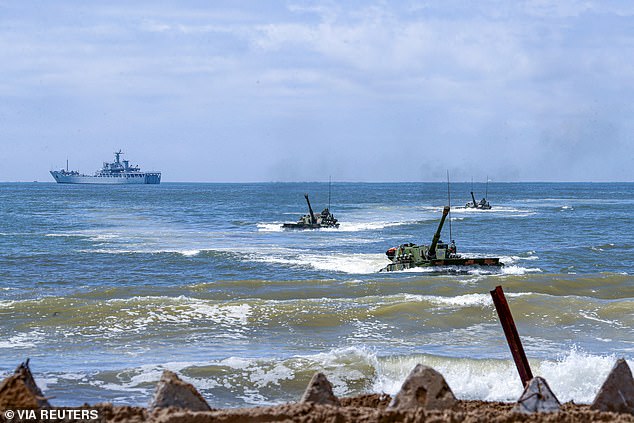 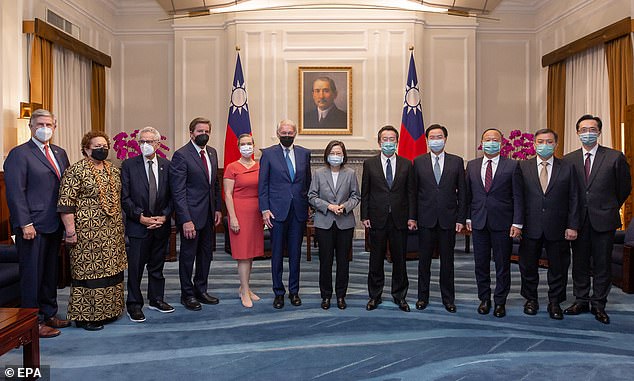 Taiwanese president Tsai Ing-wen (centre) stands with US Senator Ed Markey (to her right) in a photo released by the self-ruled island’s Presidential Office. They held a meeting this morning

Beijing leaders claim the island territory as their own and have promised to one day seize it.

‘The delegation had an opportunity to exchange views with Taiwan counterparts on a wide range of issues of importance to both the United States and Taiwan,’ it said.

The bipartisan trip sparked another bellicose response from Beijing, which said it had carried out a fresh round of ‘combat readiness patrol and combat drills in the sea and airspace around Taiwan island’ on Monday.

Monday’s drills followed days of huge exercises around Taiwan in the wake of Pelosi’s visit which saw Beijing send warships, missiles and jets into the waters and skies near the island.

Taipei condemned those drills and missile tests as preparation for an invasion.

China’s Communist Party has never ruled Taiwan but says it will use force if necessary to take the island and bristles at any perceived treatment of it as a sovereign nation state.

That decades-old threat was reiterated in a white paper published last week, when China’s Taiwan Affairs Office said it would ‘not renounce the use of force’ against its neighbour and reserved ‘the option of taking all necessary measures’. 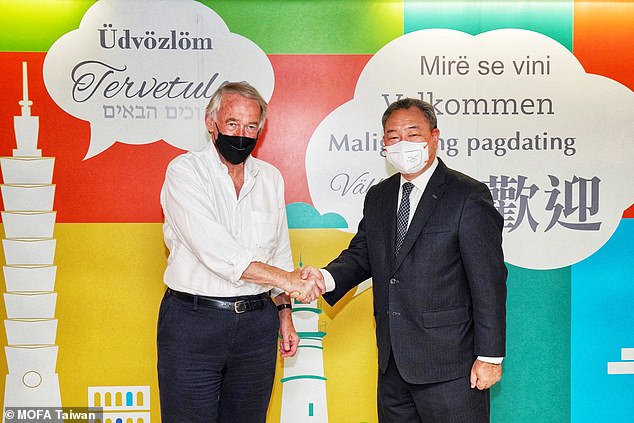 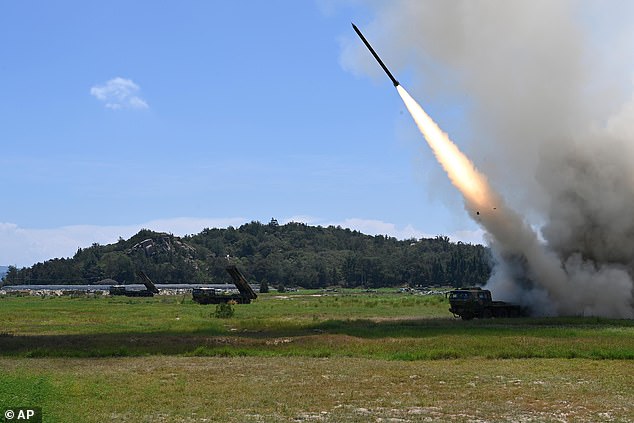 Taipei has remained defiant throughout the standoff with Beijing, with Premier Su Tseng-chang saying the island welcomes ‘all countries and friends across the world’ who want to support it.

‘We shouldn’t be too afraid to do anything, afraid to let visitors come and afraid to let our friends come, just because we have an evil neighbor next door,’ he said.

Foreign minister Joseph Wu struck a similar tone after meeting the US delegation on Monday.

Pelosi has stood by her visit which, combined with Beijing’s response, sent tensions in the Taiwan Strait soaring to their highest in decades.

President Joe Biden said the US military was opposed to the trip by his fellow Democrat, who is second in line to the presidency after the vice president. 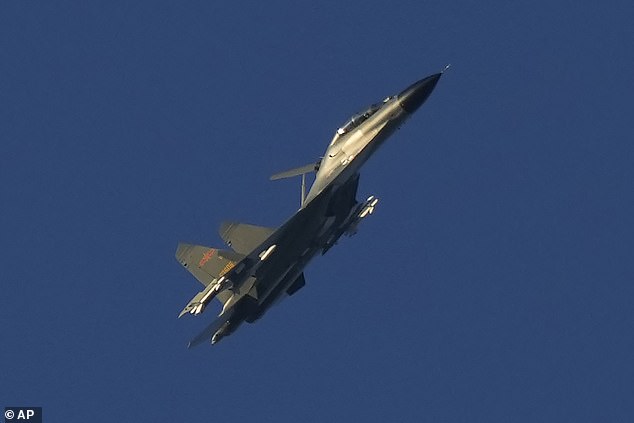 Congress is constitutionally an equal branch of government in the United States, with lawmakers free to travel where they wish, and Taiwan enjoys bipartisan backing in divided Washington.

It remains deliberately ambiguous about whether it would come to Taiwan’s aid militarily if China invaded.

Visits by senior US officials to Taiwan have happened for decades and even Pelosi’s trip was not without precedent – then-speaker of the House of Representatives Newt Gingrich visited in 1997.

But the frequency and profile of US visits has increased both under former president Donald Trump and Biden.

Taiwan has also seen a flurry of delegations visit from Europe and other Western allies in recent years, partly in response to Beijing’s more aggressive stance under Chinese President Xi Jinping.