Hong Kong: Donald Trump warned that China was moving troops to the Hong Kong border as protesters clashed with riot police at the city's international airport for a second time last night. 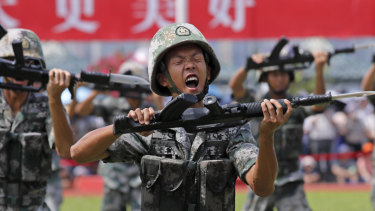 Chinese People’s Liberation Army soldiers demonstrate their skill during an open day of Stonecutter Island naval base, in Hong Kong in June. Credit:AP

Scuffles broke out after protesters allegedly detained two men, accusing them of being undercover Chinese officials. One was a reporter for a state-owned newspaper.

Video released by state media on Tuesday appeared to show Chinese paramilitary police assembling in the border city of Shenzhen. The media said China was "getting tanks ready" for a major "drill" after months of protests. Footage showed scores of heavily armoured vehicles with more vehicles stationed in an empty sports stadium.

Wary of being seen to undermine Hong Kong's authority, the Chinese government has so far resisted sending in its own troops.

But repeated videos of military exercises appeared to be sending the cautionary message that Beijing was ready and willing to step in. Officials continued with their rhetoric, denouncing the demonstrations as "serious criminal acts with sprouts of terrorism emerging."

Hong Kong legal experts said Beijing could be preparing to use anti-terrorism laws, and possibly the army, to quell the demonstrations.

Dominic Raab, the Foreign Secretary, said: "Concerning to see what's happening in Hong Kong and the worrying pictures of clashes between police and protesters at the airport. As I said to Carrie Lam during my call last week, we condemn the violence and encourage constructive dialogue to find a peaceful way forward."

The US president last night waded in with a tweet: "Our Intelligence has informed us that the Chinese Government is moving troops to the Border with Hong Kong. Everyone should be calm and safe!" The crisis was a "very tricky situation," he told reporters in New Jersey.

The UN high commissioner for human rights urged Hong Kong to exercise restraint and investigate evidence of its forces firing tear gas at protesters in ways banned under international law. The UN's "wrongful statement" was later rejected, with officials saying it amounted to interference in domestic affairs.

"I think there is a degree of frustration and anger at the government refusing to give any sensible ground at all, which probably provokes more violence," he told the BBC. Mr Patten also urged Boris Johnson to take a firmer line with Beijing.

Trouble began as a number of regular police officers entered the airport without riot gear to assist paramedics after one of the men collapsed. Protesters drove the police out of the terminal building and shortly afterwards around 50 riot police arrived.

Police used pepper spray and made several arrests as scenes briefly turned violent. One officer was cornered and beaten with his own baton before activists dispersed when he drew his pistol.

The second man was bound with cable ties and appeared semi-conscious as protesters displayed his belongings on the floor. Hu Xijin, editor-in-chief of the Global Times, said the man was a reporter for the Chinese state newspaper.

Protesters occupied the airport over five consecutive days as mass demonstrations against Chinese rule in Hong Kong entered a third month, despite pleas from city authorities for public order to be restored.

"Let's set aside differences and spend one minute to look at our city and our home," said Carrie Lam, Hong Kong's leader, yesterday morning in a direct appeal to protesters. "Could we bear to push it into an abyss where everything will perish?"

She added: "Violence, no matter if it's using violence or condoning violence, will push Hong Kong down a path of no return." At times she appeared to be on the verge of tears, saying that "sincere dialogue" could begin only once calm had returned.

Meanwhile, Tom Tugendhat, chairman of the UK Government's foreign affairs committee, said the UK should extend citizenship rights to Hong Kong citizens. And in Washington, senate majority leader Mitch McConnell, a Republican, praised protesters for standing up to the Chinese Communist Party, warning "the world is watching" for any violent crackdown by Beijing.

Calm finally returned to the airport late last night and some passengers were allowed through to catch the few flights still scheduled to depart early this morning to destinations including Bangkok and Doha.

"Sorry for the inconvenience, we are fighting for the future of our home," read one protest banner at the airport.

The fallout from the protests and the violence is being felt in other ways.

US officials said the Chinese government has denied requests for two US Navy ships to make port visits to Hong Kong amid civil unrest.

Christensen said it was up to China to say why it denied the requests.

He said the US Navy expects port visits to Hong Kong to resume. The last Navy ship to visit was the USS Blue Ridge in April 2019.