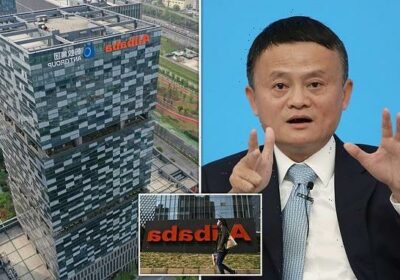 The fine, about 4 per cent of Alibaba’s 2019 domestic revenues, comes amid a crackdown on technology conglomerates and indicates China’s antitrust enforcement on internet platforms has entered a new era after years of a laissez-faire approach.

The Alibaba business empire has come under intense scrutiny in China since billionaire founder Jack Ma’s stinging public criticism of the country’s regulatory system in October.

Alibaba and Ant Group founder Jack Ma has lost his title as China’s richest man, a list published today showed, after he angered Beijing and his empire was put under heavy scrutiny by Chinese regulators 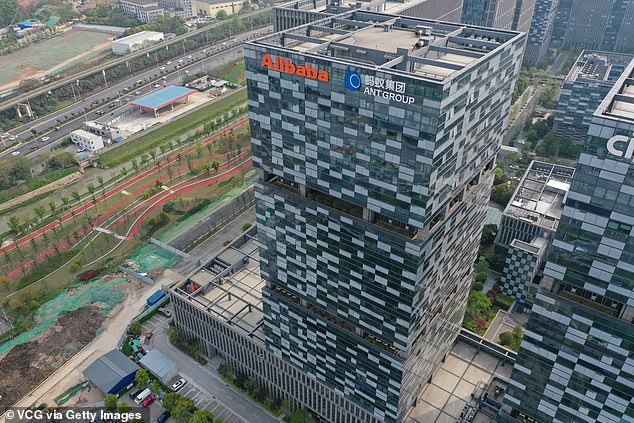 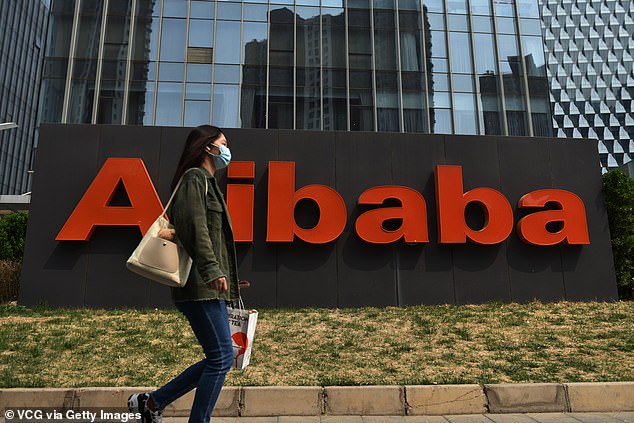 A month later, authorities scuttled a planned £27billion IPO by Ant Group, Alibaba’s internet finance arm, which was set to be the world’s biggest ever.

The State Administration for Market Regulation (SAMR) announced its antitrust probe into the company in December.

While the fine brings Alibaba a step closer to resolving its antitrust woes, Ant still needs to agree to a regulatory-driven revamp that is expected to sharply cut its valuations and rein in some of its freewheeling businesses.

Jack Ma is a former English teacher. He cofounded Alilibaba Group which is one of the world’s largest e-commerce businesses.

Ma and his family had held the top spot for China’s richest in the Hurun Global Rich List in 2020 and 2019.

Ma’s recent woes were triggered by an October 24 speech in which he blasted China’s regulatory system, leading to the suspension of his Ant Group’s $37 billion IPO just days before the fintech giant’s public listing.

Regulators have since tightened anti-trust scrutiny on the country’s tech sector, with ecommerce giant Alibaba taking much of the heat; the market regulator launched an official anti-trust probe into Alibaba in December.

The clampdown on the company saw the one-time darling of China’s entrepreneurs fall down the pecking order.

Chinese regulators also began to tighten their grip on the fintech sector and have asked Ant to fold some of its businesses into a financial holding company to be regulated like traditional financial firms.

Ma, who is not known for shying away from the limelight, then disappeared from the public eye for about three months, triggering frenzied speculation about his whereabouts. He re-emerged in January with a 50-second video appearance.

‘The market has been anticipating some sort of penalty for some time … but people need to pay attention to the measures beyond the anti-monopoly investigation.’

The SAMR said it had determined that Alibaba, which is listed in New York and Hong Kong, had been ‘abusing market dominance’ since 2015 by preventing its merchants from using other online e-commerce platforms.

The practice, which the SAMR has previously spelt out as illegal, violates China’s antimonopoly law by hindering the free circulation of goods and infringing on the business interests of merchants, the regulator added.

Besides imposing the fine, which ranks among the highest ever antitrust penalties globally, the regulator ordered Alibaba to make ‘thorough rectifications’ to strengthen internal compliance and protect consumer rights.

Alibaba said in a statement that it accepts the penalty and ‘will ensure its compliance with determination’. The company will hold a conference call on Monday to discuss the penalty.

‘We will tackle it openly and work through it together,’ CEO Daniel Zhang said in a memo to staff seen by Reuters. ‘Let’s improve ourselves and start again together as one.’

The fine is more than double the $975 million paid in China by Qualcomm, the world’s biggest supplier of mobile phone chips, in 2015 for anticompetitive practices.

‘There has been weakness in China’s big tech stocks and I think this fine will be seen as a benchmark for any other penalties which could be applied to the other companies,’ said Louis Tse, managing director at Wealthy Securities in Hong Kong.

The hefty penalty on Alibaba also comes against the backdrop of regulators globally, including in the United States and Europe, carrying out tougher antitrust reviews of tech giants such as Alphabet Inc’s Google and Facebook Inc.

With the fine on one of its most successful private enterprises, Beijing is making good on threats to clamp down on the ‘platform economy’ and rein in the behemoths that play a dominant role in the country’s consumer sector.

‘What comes after Alibaba’s fine is the likelihood that there will be damage to China’s other internet giants,’ said Francis Lun, CEO of GEO Securities, Hong Kong.

‘Their growth has been enormous, and the government has turned a blind eye and allowed them to carry out uncompetitive practices. They can no longer do that.’

China’s big technology firms have been stepping up hiring of legal and compliance experts and setting aside funds for potential fines, amid the antitrust and data privacy crackdown by regulators, Reuters reported in February.

Chinese official media hailed the penalty imposed on Alibaba, saying it would set an example and bolster awareness about anti-monopolistic practices and the need to adhere to related laws.

The fine has released a ‘clear policy signal’, Shi Jianzhong, antitrust consultant committee member of the State Council and professor of China University of Political Science and Law, wrote in the state-backed Economic Times.

Wium Malan, an analyst at Propitious Research in Cape Town, who publishes on the Smartkarma platform, echoed the sentiment, describing the fine as a ‘clear statement of intent’.

For Alibaba, Malan said, the fine was ‘affordable’ but that the market was still ‘waiting to see what the ultimate impact would be from the Ant Group restructuring, which still leaves a lot of uncertainty’.