Child born amid flames and gunfire matures as his nation struggles Dili: Joanna Remejio has a crystal-clear memory of the night her first child, Pedro Unamet, entered the world.

Gunfire rang out across East Timor’s capital, Dili, and militias roamed the streets. The couple, like hundreds of other Timorese, had been sheltering in the United Nations compound in the capital for several days after Indonesian militia had strafed the school in which they were staying, forcing them to flee. 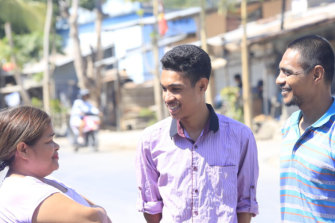 Pedro Unamet Remeijo (centre) in Dili with his parents Simplicio and Joanna. He hopes to study geology. Credit:Jordão Henrique

East Timor had voted on independence from Indonesia on August 30 and on September 4 the result was declared. A whopping 78.5 per cent of people had voted yes to independence and the already febrile situation on the ground became increasingly violent.

The Sydney Morning Herald and The Age's legendary foreign correspondent Lindsay Murdoch, the last Western journalist in Dili, was also in the UN compound on the night Pedro was born.

He described the scene: At 3.15 am, probably the darkest hour of a long night, Pedro poked his tiny, furry head into the world.

I was, at the time, dozing two metres away on the concrete floor of a makeshift hospital.

Pedro didn't cry too much, so as not to wake me. But instead of opening my eyes to the 'crazy dog' militia, as we now call the killers over the razor-wire fence, I saw a beaming Mrs Joanna Remejio nursing her just-born son on a piece of cardboard laid on the floor.

She wasn't showing the pain she was obviously suffering after the birth of her third child.

"I am very happy that my baby is alive," she said … Father Peter Hosking, a Melbourne priest, fussed over mother and child, who were doing nicely. Within three hours, he had baptised the tiny baby as Mrs Remejio had insisted – full name Pedro Unamet Remejio.

As Pedro's 20th birthday approaches, and as East Timor celebrates the 20th anniversary of that vote, Joanna recalls the fear she and her family felt in the days leading up to the birth of her son.

“At that time, on September 4, after the result came out, we saw smoke over the city, the militias began to come for people and everyone was afraid, that’s why we decided to run,” Joanna says.

And while they did consider fleeing for the hills, as many in the city did, Joanna was simply too heavily pregnant to undertake the journey. 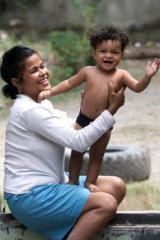 When the militias started to shoot near the school they were staying in, near the UN compound, Joanna and Simplicio decided to jump the fence and seek more secure shelter.

Two decades later and in the calm light of day, we sit on plastic chairs in the same home the family fled 20 years ago. Half a dozen coffins sit on the other side of the room – the family business.

Joanna recalls that night. Emiliana, a nurse from Liberia who was working for the UN was present, as was Australian Jesuit priest Peter Hosking. The pair helped Joanna during the birth.

“I was surprised, Pedro was such a quick delivery, it was like a miracle delivery, I never felt like I had just given birth.”

Hosking, who is now based in Adelaide, remembers the violence following the independence vote vividly too.

"The compound became a place of sanctuary for a couple of hundred UN staff, and 800 or 900 East Timorese who came in. It was crowded, people had cut themselves coming through the razor wire. There was a French doctor, a Liberian nurse and myself. We were getting nervous about water running out," he says.

"I was also getting concerned about security – you realised it could be overrun at any point."

Hosking remembers being woken at around 3am by the nurse on the night Pedro was born.

"I heard some people outside my door and the Liberian nurse was being so gentle with this baby who was being born. And he was born, and she wrapped him up. We were all so afraid and it was this moment of joy, vulnerability, hope." 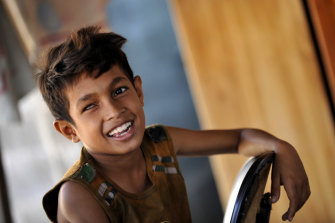 Pedro at age nine, growing up as his fledgling nation matured alongside him. Credit:Justin McManus

A few hours later Joanna asked him to baptise the newborn, choosing his name as an homage to the priest and to the United Nations Mission in East Timor (Unamet).

The couple, who are not wealthy, have six children who they are sending to a local Catholic school.

Pedro, who laughs when I suggest he is famoso, is due to finish school at the end of the year. He is "proud that our country is independent now" and he has high hopes for his own future.

"I want to go to university, to the national university of East Timor. My plan, my dream is to be a geologist."

Joanna jumps in. She wants him to go to a foreign university, perhaps in Darwin.

“When he was a small child, I checked the cost … but it’s very expensive. So I have already tried to get him a scholarship to go overseas. I want him to study in another city," she says.

On Thursday she lobbied Ian Martin, the head of Unamet who was in town for the anniversary, to help her meet Xanana Gusmao – the hero of the resistance and still the most influential politician in East Timor – to try and secure government support for a scholarship.

The chaos that followed the August 30, 1999 referendum on whether East Timor should be independent had been in the offing for months and surprised few in the city.

In the end, 1500 people would die and more than 500,000 people were displaced during the violence. Unamet staff who helped organise the vote were evacuated to Darwin – along with scores of local refugees from the violence such as Joanna, Simplicio and Pedro – and thousands of homes and businesses were destroyed across the newly independent nation.

James Batley was Australia's High Commissioner in the Solomon Islands when the call came from Canberra in June 1999. He was being sent to East Timor to head up the Australian government presence ahead of the vote and recalls vividly how tense the lead-up to the vote was. 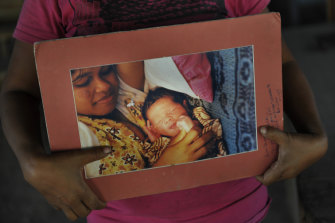 Pedro is pictured as a newborn child in the arms of his mother, Joanna.Credit:Justin McManus

"The sound of gunfire was constant. It was not necessarily at anyone. I remember a car dealership opposite the embassy being set on fire," he says.

"There had been violence, people had been killed, we had seen the rise of militia groups. There was a rapid build-up of UN numbers to manage it," he says.

"The overriding thing was the violence and the question of how bad it could get, could it derail the process. From the Australian government's point of view, it was still an Indonesian province … there was a lot of diplomacy both publicly and behind the scenes."

It wasn't until the Australian-led Interfet (International Force East Timor) returned on September 20 that the situation began to calm down.

Hosking recalls, amidst the trauma and violence of the militias marauding around the city, making his peace with dying in those dark final days in the compound before he was evacuated.

"Curiously, with my training as a Jesuit and as a clinical psychologist, I kind of felt like this is exactly where I was supposed to be, this is where God wants me to be.

"I remember talking to the head of the Jesuit Refugee Service at the time, Sue Curtain. There was a sense of facing my death, and being at peace with it."

After leaving East Timor, Hosking says, "I felt we had abandoned people in a moment of need, so going back in October [1999] to September the following year was probably the most meaningful thing I’ve done in my life".

Fast-forward 20 years and East Timor, a nation of about 1.3 million people, still has serious problems.

Development has not been as rapid as its citizens might have hoped, with nearly half the population still living in poverty. The country faces a significant demographic challenge – half its population are under the age of 35, and there aren't nearly enough jobs for them all.

The country's infrastructure is in a parlous state, the health and education system need serious improvement and its finances are fragile: about 90 per cent of East Timor's annual $US1.3 billion budget is paid out of a Petroleum Fund which holds about $US15 billion but which is being depleted.

The legacy of being a neglected colony of Portugal for more than 200 years until 1975 – and then invaded, occupied and colonised by Indonesia until 1999 – has left the country myriad challenges.

Joaquim Sarmento and Tarcisius Dewanto became priests a few months before independence in 1999. Today, Sarmento is the head of the Jesuits in East Timor. His friend and colleague Dewanto was killed in the days after the independence vote – as was another priest, Karl Albrecht, just a few metres from where we sit and talk. 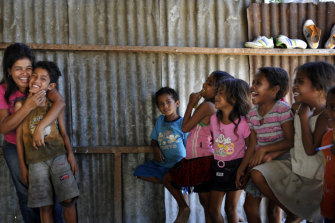 Pedro, pictured here with his mother Joanna at age nine, is one of six children.Credit:Justin McManus

The Catholic Church was targeted at this time because East Timor is a deeply religious country – about 98 per cent of the population is Catholic – and its priests, nuns and brothers offered shelter, counsel and protection from danger.

Sarmento is blunt about the challenges that still face his country, arguing that East Timor has not developed as rapidly as it might have because there was a "lack of preparation and experience for self-government".

"Our orientation is still to the past, we refer to history."

This manifests, he says, in the appointment of people to government posts: "There is favouritism of those who fought in the past … not on the quality needed.

"People have become so dependent on the state, there is not enough job creation, people are just waiting for the state to create jobs … people have lost the spirit of working together."

Sarmento would like to see politicians put aside their differences and work together again, as happened in the years leading up to independence, but he isn't sure if it can happen.

Batley, the former ambassador who stayed from 1999 to 2002, also notes the prominent role many independence leaders still play in politics.

"It’s interesting to see the the independence leaders are still essentially running the country," he says.

"I’m not surprised Timor still struggles with issues of development, notwithstanding the high hopes at the time. There is still a lot of poverty."

On the eve of the anniversary of independence – and after everything that happened – Joanna also says she is disappointed with the political instability that has beset the country in recent years, with several changes of government and development slow.

But it isn't all bad.

"The difference now is we are a free nation, and I’m glad. We are free, there is no pressure, we are not afraid now."