Charity watchdog probes £1m cost of Oxford dons’ bid to kick out dean after his ‘aggressive and bullying’ demands for increase on £90,000-a-year pay 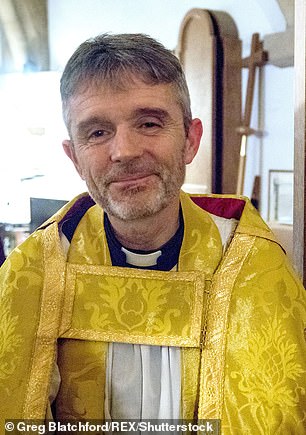 The Very Reverend Martyn Percy, 57, was suspended on full pay last September. But the college announced last week that the charges brought against him had not been upheld

An Oxford college is facing an investigation by the charity watchdog over the ‘eye-watering’ sums of money spent by squabbling academics on a doomed legal battle to force its dean from his job.

Christ Church college is believed to have forked out close to £1 million on legal fees during an extraordinary battle between its dons and the dean, the Very Reverend Martyn Percy. Professor Percy, 57, was suspended on full pay in September last year.

The feud culminated in an eight-day tribunal in London, presided over by retired High Court judge Sir Andrew Smith, with top barristers acting for both sides.

The college announced last week that the charges brought against Prof Percy had not been upheld and he would be returning to work.

The dean’s supporters claim a clique of ‘stuffy, bullying dons’ tried to force the theologian out of the college with trumped-up charges of ‘immoral, scandalous or disgraceful conduct’.

They claim his detractors opposed his efforts to modernise the running of the prestigious college, which was founded in 1546 and houses the cathedral for the Diocese of Oxford.

But Prof Percy’s rivals blame the feud on his ‘aggressive and bullying’ demands for an increase to his £90,000-a-year salary. The post also comes with free accommodation at the college’s deanery, including a garden that inspired Lewis Carroll’s Alice’s Adventures In Wonderland.

Friends of Prof Percy last night claimed he and his wife had been brought to the brink of financial ruin by the £80,000 legal costs involved in fighting the case.

Meanwhile, college trustees who signed off huge spending on pursuing the case were under pressure to release the judge’s full 110-page ruling to the public. Despite the tribunal’s findings, a toxic row continues, with one academic describing Prof Percy as a ‘greedy priest with a Messiah complex’.

However, one of the dean’s backers said: ‘The college’s trustees have blown £1 million trying to force Martyn out of his job on trumped-up charges which included amazingly vague claims such as he talked too loudly to them on the phone and that he was rude in a meeting. It was schoolboy stuff and they should hang their heads in shame.’

The Mail on Sunday understands officials from the Charity Commission have contacted the college and are examining complaints brought by Prof Percy’s supporters.

A Commission spokesman said: ‘We have not to date seen evidence to suggest the charity’s trustees have acted improperly. However, we are now considering the report of the independent chair of the internal tribunal to determine whether it raises any concerns for us as regulator, and we will carefully assess any concerns that are brought to us. In light of the significant legal costs the charity has incurred, we have reminded the trustees of the importance of demonstrating to the public that they are mindful of the special status all charities hold in the public mind.’

The unedifying saga – first revealed by The Mail on Sunday last November – has been hugely embarrassing for Christ Church, the richest of Oxford’s colleges with funds of more than £500 million.

The college last night declined to publish the tribunal judge’s full remarks and to answer questions about the cost of the case, the ramifications of a possible probe by the charity watchdog and whether any of the academics involved would resign.

A spokesman said: ‘Christ Church considers the complaint process concluded and looks forward to Martyn Percy resuming his duties as dean. The tribunal was an internal and confidential process and the judgment is strictly private and confidential.’