Chancellor Angela Merkel’s party is bleeding voters as her ally Annegret Kramp-Karrenbauer steps up to replace her as leader of the Christian Democratic Union party.

Kramp-Karrenbauer, 56, dubbed ‘mini Merkel’, narrowly won the leadership runoff with 517 votes versus 482  against her rival, Friedrich Merz on Friday.

She defeated her more conservative rival and represents a youthful, progressive conservatism.

But she faces a battle to consolidate power as party members walked out on the CDU as her victory was announced. 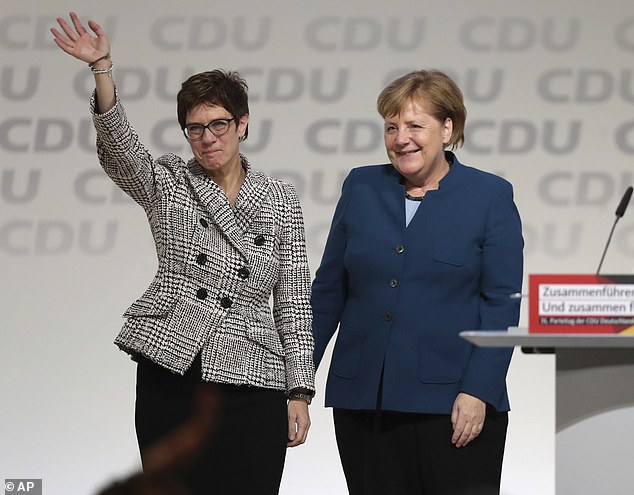 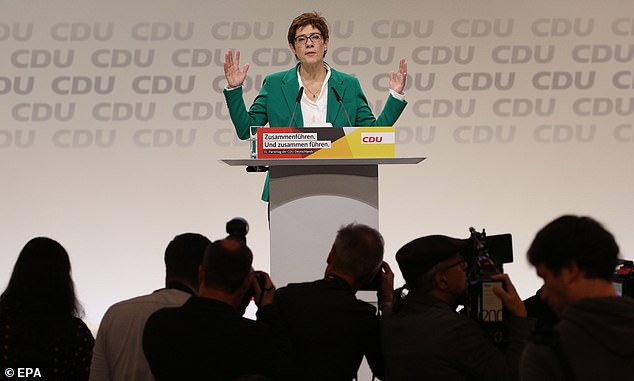 Annegret Kramp-Karrenbauer said: ‘This party is not split – we all have the task of working on the unity of this party’ 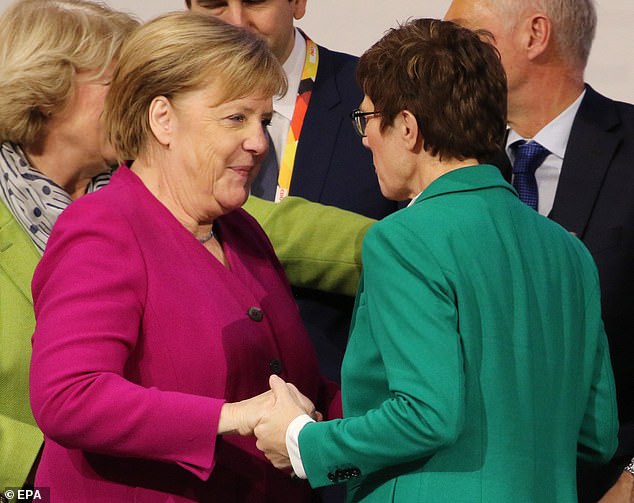 According to the Daily Telegraph, CDU offices across the country confirmed losses in membership and a senior party figure said ‘very many’ had quit.

Kramp-Karrenbauer showed on Saturday she is keen to prevent lasting divisions and give younger members a strong voice.

She nominated Paul Ziemiak, the 33-year-old leader of the party’s youth wing, to serve as her general secretary – the official in charge of day-to-day political strategy and the job she held herself until she was elected leader.

‘This party is not split – we all have the task of working on the unity of this party,’ she told a party congress in Hamburg.

Ziemiak, who ran unopposed, won the support of 62.8 percent of delegates, a result suggesting Kramp-Karrenbauer still has plenty of work to do.

Merkel announced in October she would give up the reins in her party, though she plans to remain chancellor until her current term ends in 2021.

In a passionate speech to the 1,001 delegates at the congress in Hamburg this afternoon, she seemed to try to move away from her ‘mini Merkel’-nickname .

‘Dear delegates, I stand before you as I am and as life made me and I am proud of that.’

Playing up her 18 years in regional government, she added to cheers and loud applause: ‘I learned what it is to lead – and above all learnt that leadership is more about being strong on the inside than being loud on the outside.’

Earlier today, Merkel marked the end of her 18 years as CDU leader with a farewell speech that moved some to tears at the party congress in Hamburg. 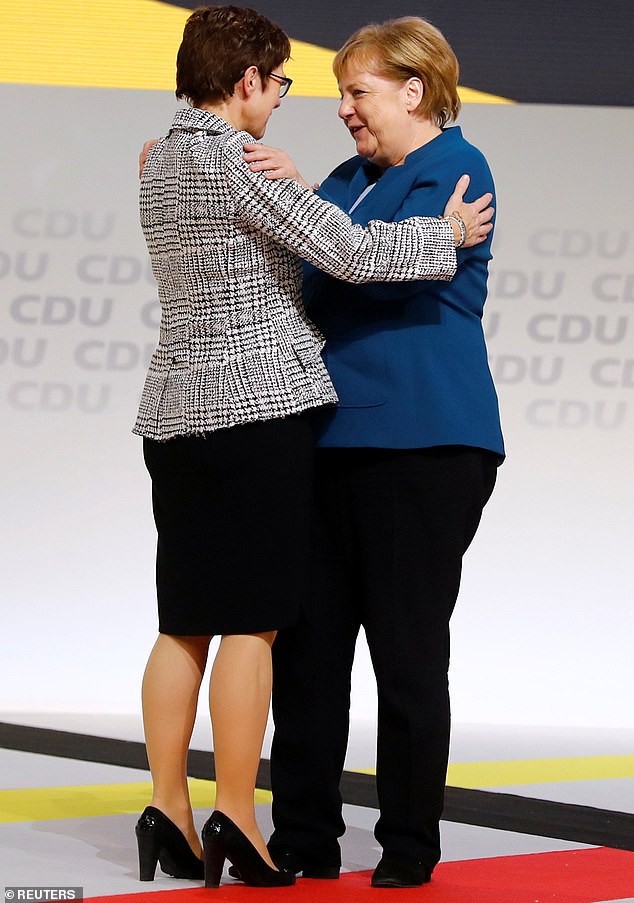 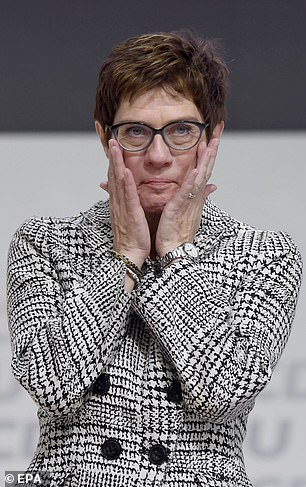 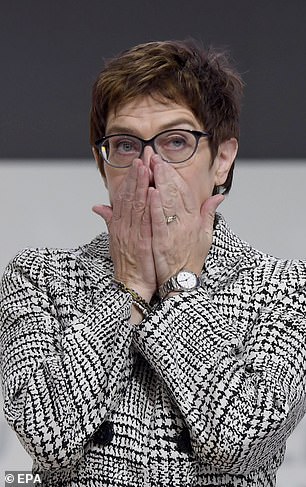 Emotional:  Kramp-Karrenbauer appeared shocked and overjoyed when the votes came in 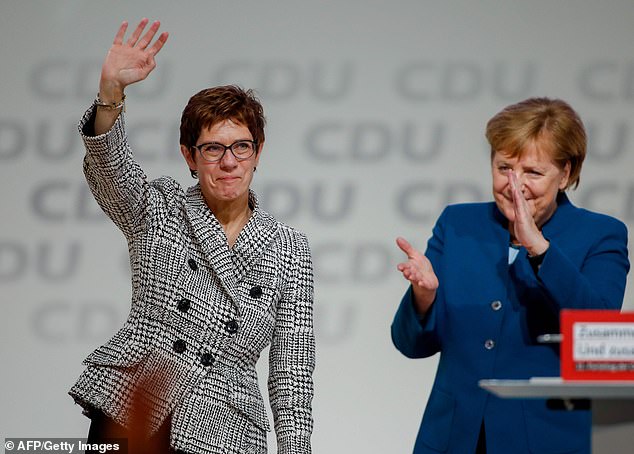 Kramp-Karrenbauer, 56, is the CDU’s general secretary and has spent some 18 years working in regional politics for the party 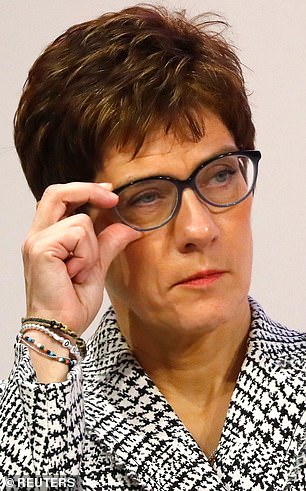 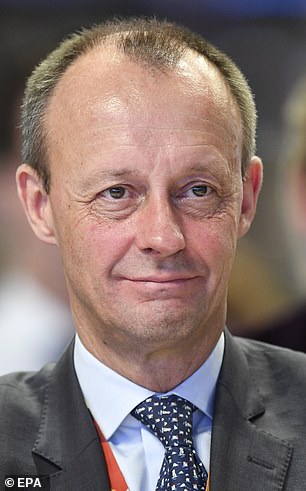 Winner: Annegret Kramp-Karrenbauer won the leadership with 517 votes versus the 482 of her rival, Friedrich Merz, a former leader of the party’s parliamentary group

WHO IS CDU LEADER ANNEGRET KRAMP-KARRENBAUER ? 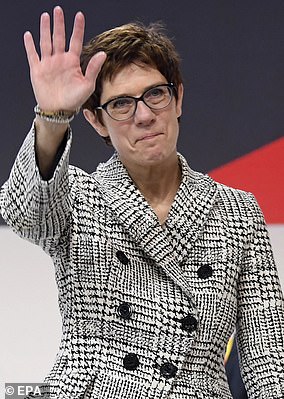 The CDU’s general secretary since February, Annegret Kramp-Karrenbauer – often called ‘AKK’ – is a Merkel ally and the closest to her centrist stance.

She touts her own lengthy experience in regional government, which saw her become the first woman to become a state’s interior minister, or top security official, and serve as governor of western Saarland state.

Kramp-Karrenbauer says she knows how to win elections, having defied expectations to win re-election in Saarland by a wide margin last year.

And she says she put herself ‘at the service of the CDU’ by giving up that job this year.

Kramp-Karrenbauer has consistently shown more willingness than the chancellor to cater to conservative rhetoric and more vocally opposed gay marriage.

Recently, she has sought to put careful distance between herself and Merkel without disavowing her, saying she has had ‘very lively discussions’ with the chancellor on various subjects.

She has talked tough on immigration issues, proposing a lifelong entry ban to Europe for asylum-seekers convicted of serious crimes. But she has warned that endlessly reheating arguments about the 2015 migrant influx is a turn-off for voters.

Merkel has been CDU leader since 2000 and chancellor since 2005. She moved her party relentlessly to the center, dropping military conscription, accelerating Germany’s exit from nuclear energy, introducing benefits encouraging fathers to look after their young children and allowing the introduction of gay marriage.

Most controversially, she allowed large numbers of asylum-seekers into Germany in 2015.

Merkel listed some of those moments and many more in a half-hour farewell speech as leader, telling delegates that ‘our CDU today is different from the year 2000, and that is a good thing.’

She also celebrated Germany’s balancing its budget in recent years and its response to the eurozone debt crisis.

For years, Merkel’s popularity lifted the CDU and its Bavaria-only sister party, the Christian Social Union.

In the 2013 election, they won 41.5 percent of the vote and only just fell short of an outright parliamentary majority. 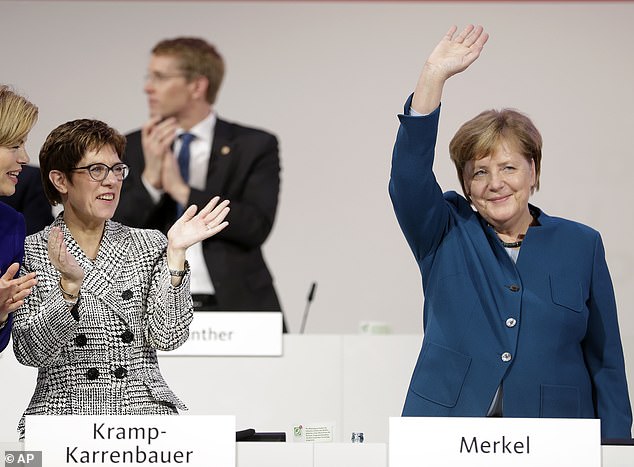 Princess and the queen: Angela Merkel thanks the CDU following her farewell speech at the party’s convention in Hamburg on Friday, flanked by Kramp-Karrenbauer, 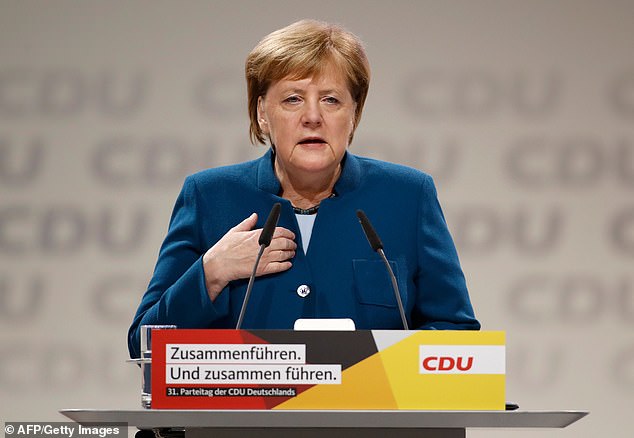 Going, but staying: Merkel announced in October she would give up the reins in her party, though she plans to remain chancellor until her current term ends in 2021 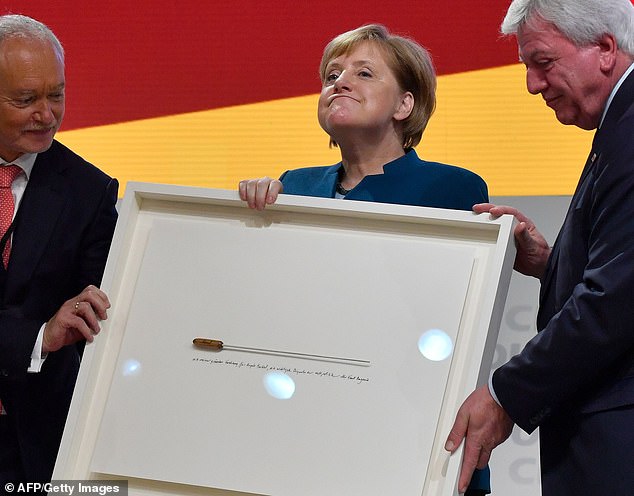 Parting gift: Merkel holds a frame with a baton signed by conductor Kent Nagano and was used by him as he conducted Beethoven’s 9th symphony at the Elbphilharmonie venue during the 2017 G20 summit in Hamburg. Nagano’s dedication reads: ‘In my greatest reverence for Angela Merkel, the most important conductor of world politics’ 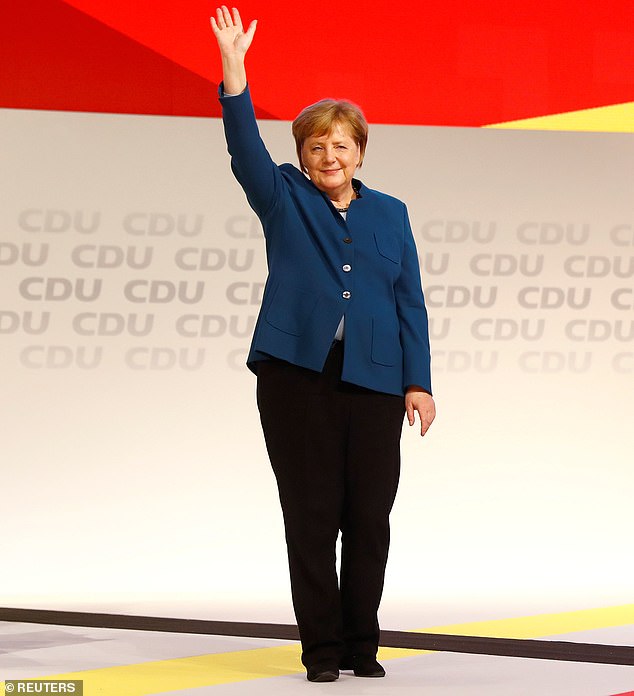 I’m off! Merkel waves to the more than 1,000  CDU party delegates at the congress

Merkel, however, recalled that the CDU was in a deep crisis when she took over in 2000, mired in a party financing scandal surrounding ex-Chancellor Helmut Kohl.

‘We are in demanding times today, no doubt about that,’ she said. ‘But … we faced an hour of destiny for the Christian Democratic Union 18 years ago.’

‘We kept a cool head,’ she said. ‘We showed everyone.’

Merkel appealed to the party to show unity, noting that arguments in recent years over migration have showed ‘where endless arguments lead.’

‘I wasn’t born as chancellor or as party leader,’ she said. ‘I have always wanted to do my government and party jobs with dignity, and one day to leave them with dignity.’

‘Now it is time to open a new chapter,’ Merkel said. She was greeted by a several-minute standing ovation, with some delegates holding up ‘Thank you, boss!’ placards.

At present, the center-right bloc is polling around or below 30 percent. Merkel’s fourth-term governing coalition with the center-left Social Democrats has lurched through a series of crises since taking office in March, and the CDU has lost supporters both to the liberal Greens and the far-right Alternative for Germany.