Shocking footage shows the moment a father stops to take photos of his young daughter on a level crossing where cyclists were also seen lining up for a group shot.

Network Rail has shared shocking images from the crossing in Harpham as it slammed the ‘incredibly dangerous behaviour.

Among those caught on camera is a reckless father taking pictures of his daughter, who appears to be of primary school age, along a section of track where trains can reach up to 70mph.

Their car can be seen in the background with its doors open as the youngster adopts various poses and occasionally looks behind her for approaching trains.

Another shocking clip captured on CCTV shows a group of cyclists who dismount their bikes and line up for a group photo on the crossing. 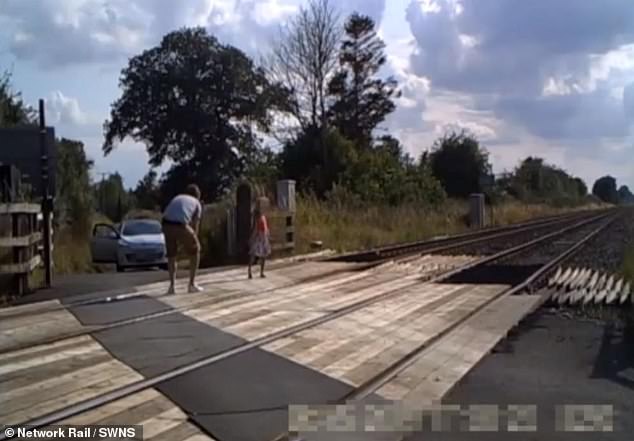 A dad was caught taking pictures of his daughter as they stood in the middle of a level crossing in Harpham, West Yorkshire

The footage was released by Network Rail in a bid to highlight the dangers posed by ignoring warning lights and alarms.

The rail body slammed ‘incredibly dangerous behaviour’ that ‘could have resulted in fatal or life- changing consequences’.

A spokesman for the organisation said: ‘Network Rail is urging cyclists and pedestrians to use level crossings safely after shocking CCTV footage shows people recklessly misusing a crossing in East Yorkshire.

‘Network Rail advises that at any level crossing with facilities for pedestrians and cyclists to cross, they must do so quickly and without stopping after they have checked it is safe to do so.

‘Most crossings have warning lights that indicate when a train is approaching even when the gates are still open.’ 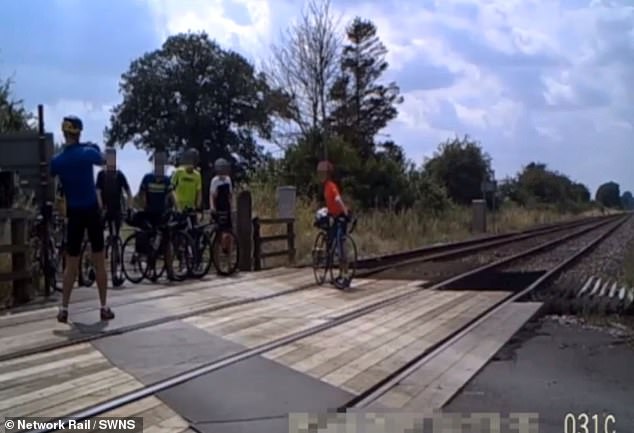 A group of cyclists posed for pictures next to and on the level crossing in Harpham, Yorkshire 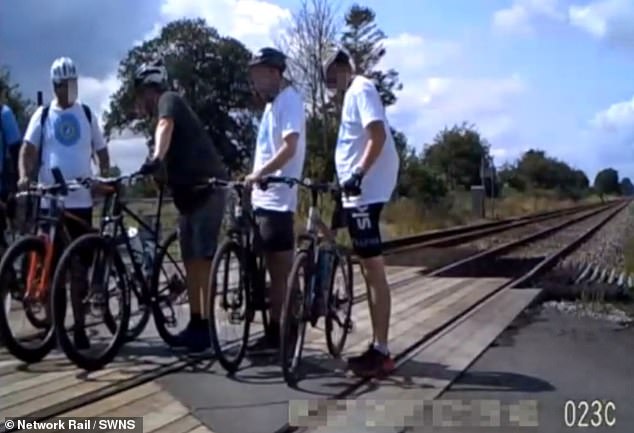 Network Rail has shared CCTV footage of ‘incredibly dangerous behaviour’ at the crossing, including images that show a group of cyclists dismount and pose for a picture on the tracks

The film also shows a cyclist wedging his bike in the tracks to help a rider through the gate on to the crossing.

A walker carrying a large backpack is also seen to enter the crossing and then pause before wandering on.

Two men and a woman on road bikes again pause on the tracks to rest and look down the line.

The spokesman added: ‘Each incident could have resulted in fatal or life changing consequences. 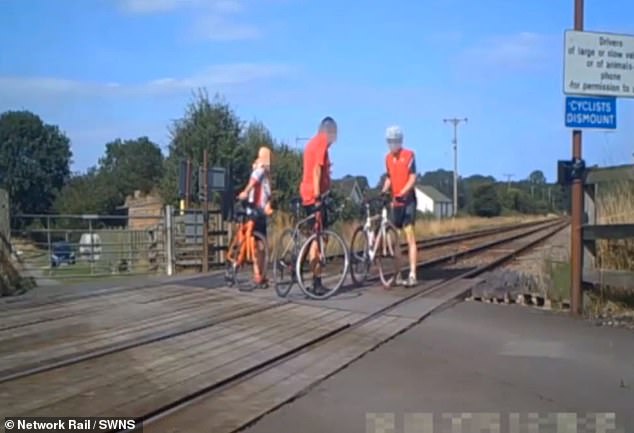 ‘Trains cannot stop quickly or swerve out of the way, so it is vital that anyone using a level crossing follows the guidance and crosses quickly, without stopping, to avoid any horrific incidents or delays to train services.’

The shocking footage is released as stark statistics show there were 316 near-misses at level crossings in the past 12 months – an increase of almost five per cent on the previous year.

There was also a near-miss at Harpham level crossing in May, which was not included in Network Rail’s video.

Operations risk advisor Vicki Beadle said: ‘The behaviour we have seen at Mingledale and Harpham level crossings is deeply concerning and shows that people are completely oblivious to the dangers they are putting themselves and their friends in.

‘More people are exercising outdoors during the summer, and may be taking new, unfamiliar routes, but the railway is not a photo opportunity and it is never safe to stop or hang around on the tracks.

‘It is crucial that people take extra care to cross quickly and directly, once they’ve checked it is safe.’