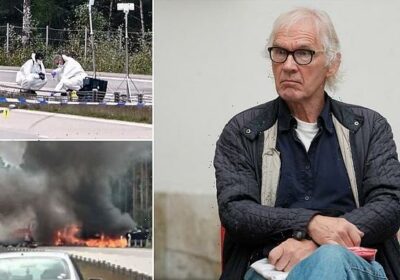 Swedish police investigating the car crash death of a controversial artist who had survived multiple assassination attempts after drawing a cartoon of the Prophet Mohammed cannot explain why his car was travelling so fast.

Lars Vilks, 75, was killed Sunday when the police car he was travelling in veered onto the wrong side of the road and collided with a truck.

Both vehicles caught fire and the truck driver, 45, was taken to hospital with serious injuries, while the two police protection officers and Vilks were all killed.

Investigators believe there were no external influences that led to the death of the artist and say the crash may have been caused by a burst tyre.

But they are unable to explain why the car was travelling at around 100mph, witnesses say, in a 68mph zone. 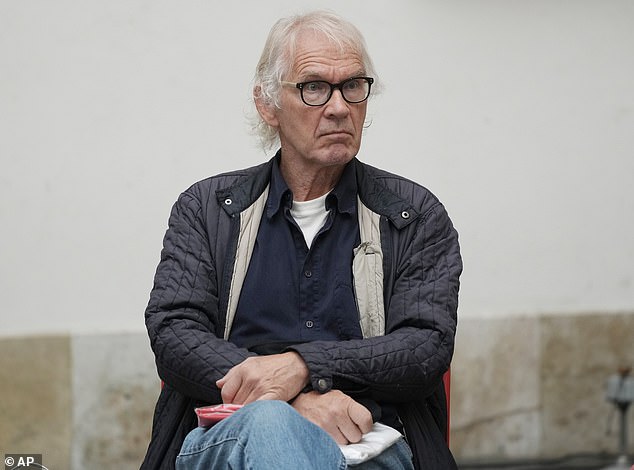 Lars Vilks, 75, was killed Sunday when the police car he was travelling in veered onto the wrong side of the road and collided with a truck 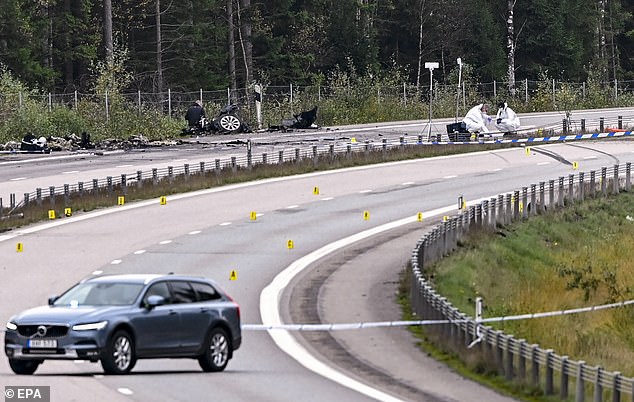 ‘In some situations, the police have the opportunity to drive at other speeds, in urgent cases and urgent service.’

Asked whether there was any indication why the car would have been in a rush, Ms Persson replied: ‘I have no such information.’

Police say at present, there is nothing to suggest the crash was anything other than an accident.

Investigators have found remains of a tyre on the road before the car veered through the metal barriers on the central reservation, into the path of the truck. 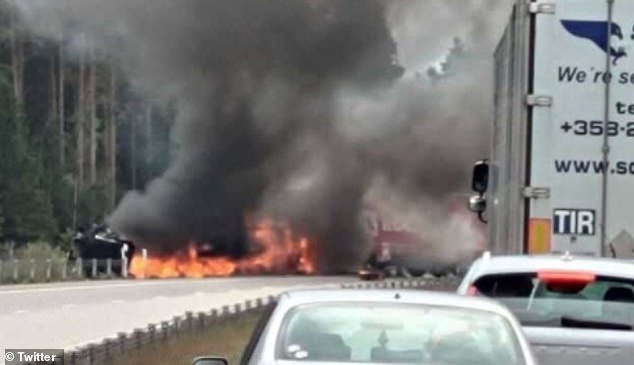 The car carrying Mr Vilks was reportedly travelling at a high speed before it veered into the other lane and collided with the truck, becoming wedged underneath it. Both vehicles caught fire (pictured)

They believe the size of the car, weighing an estimated 4.5 tonnes, helped it push through the crash barrier which is normally meant to prevent such incidents occurring.

A police probe is still looking into whether there was any foul play, while another investigation is focusing on gross negligence by the police driver.

The car was being followed by another police escort car, whose officers are being interviewed as witnesses.

Stefan Sinteus, head of the regional investigation unit, said: ‘We do not yet know the reason why the bodyguard car has crossed the wrong lane. 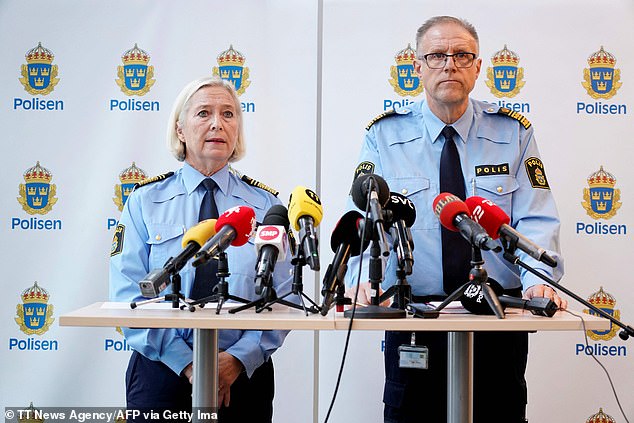 A police probe is still looking into whether there was any foul play, while another investigation is focusing on gross negligence by the police driver

‘We have found tyre remains, so we are looking at the possibility if there could have been a tyre explosion or similar.’

The truck driver, 45, remains in hospital with serious injuries.

The collision occurred just before 3pm in Markaryd, in the province of Kronoberg, Sweden.

National Police Chief Anders Thornberg said: ‘It is with dismay and great sadness that I received the news that our two colleagues and our security person died this afternoon.

‘My thoughts go out to their relatives, families, friends and co-workers.

‘I am also in contact with the police in the region to make sure that they get the support they need.’

The relatives of Mr Vilks and the two officers have been notified.

The truck driver was airlifted to hospital by helicopter, where he will be questioned by police over what happened.

The section of the road has reportedly been rebuilt several times in recent years to improve traffic safety.

Vilks was largely unknown outside Sweden before 2007, when he drew a sketch of Mohammed with a dog’s body.

Dogs are considered unclean by conservative Muslims and Islamic law generally opposes any depiction of the prophet, even favourable, for fear it could lead to idolatry.

Al-Qaeda put a bounty on Vilks’ head. In 2010, two men tried to burn down his house in southern Sweden.

Since that time, Vilks was forced to live under police protection, ‘due to the fact that he made use of his freedom of expression and his artistic freedom,’ Lind said Monday.

Over the years he continued to face death threats.

In 2014, a woman from Pennsylvania pleaded guilty in a plot to kill him.

The following year, a free-speech seminar that Vilks attended in Copenhagen, Denmark, was attacked by a lone gunman who killed a Danish film director and wounded three police officers. 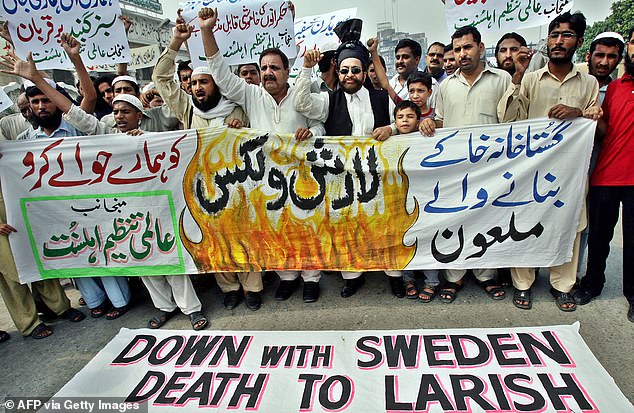 Vilks, who was widely believed to have been the intended target of that 2015 attack, was whisked away unharmed by bodyguards. The gunman later killed a Jewish security guard outside a synagogue and wounded two more officers before he was killed in a firefight with police.

Born in 1946 in Helsingborg, in southern Sweden, Vilks worked as an artist for almost four decades and rose to fame for challenging the boundaries of art through several controversial works.

His most famous pieces included ‘Nimis’ – a sculpture of driftwood built without permission in Sweden’s Kullaberg nature reserve – as well as Prophet Muhammad drawings, including the one that showed the prophet as a dog.

Vilks initially planned to display the drawing at an exhibit at a Swedish cultural heritage center, but the drawing was removed over security concerns.

It went largely unnoticed until a Swedish newspaper printed the drawing with an editorial defending freedom of expression.

Several of his works, including driftwood sculptures and Mohammad drawings, including the one showing the Muslim prophet’s head on the body of a dog, are currently on display in Warsaw, Poland.

The works are being shown as part an exhibition curated by a right-wing director that aims to challenge left-wing political correctness.