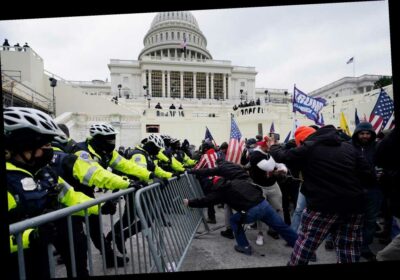 A geophysicist from Colorado allegedly dragged a police officer down a set of stairs during the Jan. 6 Capitol riot — and then bought a plane ticket to Switzerland and attempted suicide in Westchester County in the days after the siege, it was revealed in court Friday.

Jeffrey Sabol, 51, was ordered held without bail at his initial court appearance in White Plains federal court, where a judge called the evidence against him “very disturbing and deeply troubling.”

“That conduct is beyond the pale,” Judge Andrew Krause said.

Sabol, who grew up in upstate New York, was allegedly captured on video in the frenzied crowd at the Capitol, dragging a police officer down a flight of stairs during the riot. The officer was then beaten by the crowd of Trump supporters, including by a rioter with an American flag, a prosecutor said in court.

After the riot, Sabol traveled to the New York City area, where he contemplated fleeing the country and attempted suicide, prosecutors allege.

At some point while he was in Westchester County after the riot, he bought a plane ticket to Zurich, Switzerland, a non-extradition country with the US, Assistant US Attorney Ben Gianforte said at the court proceeding Friday.

He was arrested by the FBI at the Westchester County Medical Center Friday morning, where he was recovering from his suicide attempt.

The public defender who represented him at the hearing highlighted his job and community ties in an attempt to secure his release on bail.

The lawyer argued Sabol is an accomplished geophysicist who has lived for many years in Colorado after moving to the state from New York.