Jonathan Hunt has the latest from Foothill Ranch, Calif.

Two raging wildfires in California south of Los Angeles doubled in size on Tuesday as they were fanned by ferocious winds, but officials are hoping calmer weather will help increase containment.

The Silverado and Blue Ridge fires in Southern California's Orange County erupted on Monday as Santa Ana winds brought dangerous gusts to the area. The California Department of Forestry and Fire Protection, or Cal Fire, said that containment on both blazes has increased, with better results expected throughout the day.

“With favorable weather, fire crews will find opportunities to establish more control lines,” the agency said in a statement.

WILL VOTERS FORCED TO EVACUATE SOUTHERN CALIFORNIA WILDFIRES GET AN EXTENSION TO CAST BALLOTS? 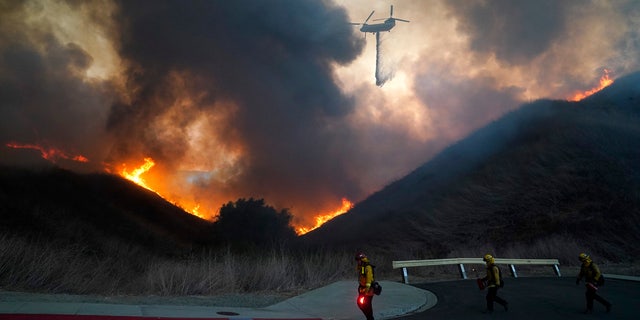 A helicopter drops water as firefighters walk with drip torches to set a backfire against the Blue Ridge Fire on Tuesday, Oct. 27, 2020, in Chino Hills, Calif.
(AP Photo/Jae C. Hong)

The Silverado Fire broke out in gusty weather around dawn Monday near Irvine, with flames quickly spreading with winds that created dangerous conditions. 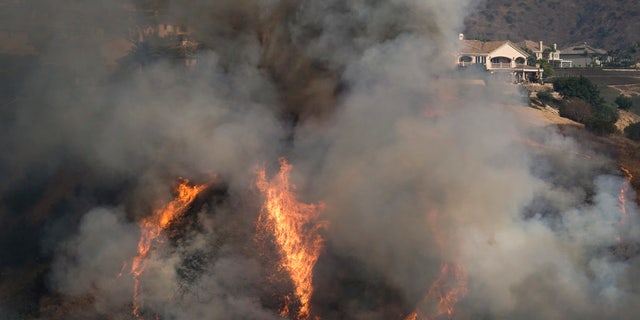 More than 1,800 firefighters are on the fire line for both fires in Orange County. A total of five have been injured battling the Silverado Fire, with two still in critical condition.

Officials said Tuesday that three of the firefighters were treated for minor injuries and released from hospitals. 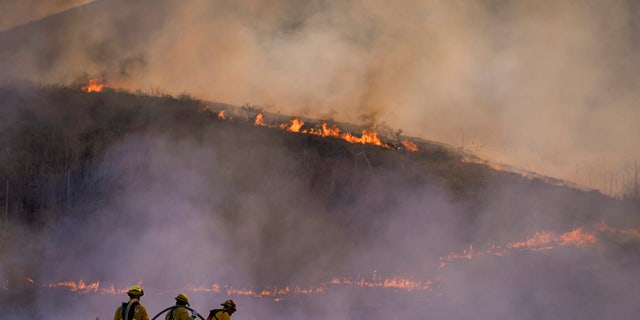 The other two, who are members of the Orange County Fire Authority handcrew, suffered second- and third-degree burns and remain hospitalized. OCFA Chief Brian Fennessy said Tuesday the two men, ages 26 and 31, are "extremely strong." 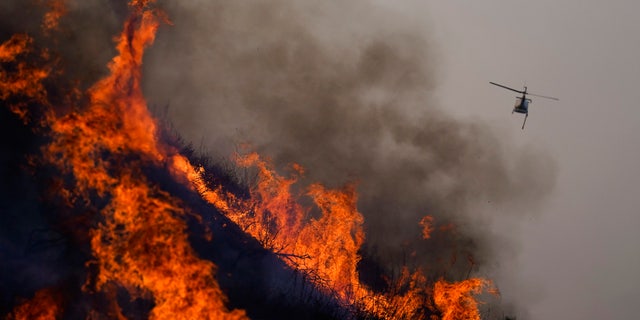 “It’s tough for any firefighter, certainly any fire chief, to feel this helpless when you’ve got part of our fire family fighting for their lives,” he told reporters at a news conference.

Authorities lifted some evacuation orders Tuesday as winds began subsiding and containment was increased. Some 70,000 are still under mandatory evacuation orders in Irvine, with 8,000 in Lake Forest and 2,500 in Yorba Linda under similar orders. 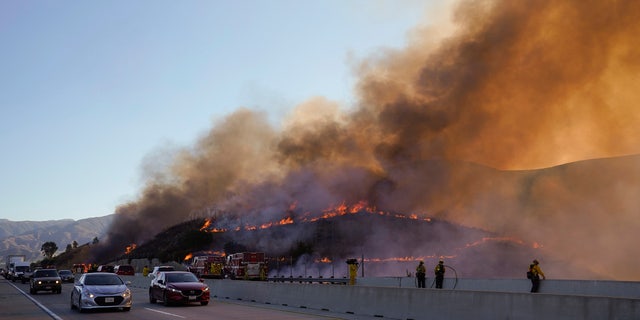 Crews tried to beat back two out-of-control wildfires in Southern California that have kept tens of thousands of people out of their homes.
(AP Photo/Jae C. Hong)

More residents were expected to receive permission to return to their homes on Wednesday.

Families who have been forced from their homes are now waiting at places like the University Community Center in Irvine for news on their homes. 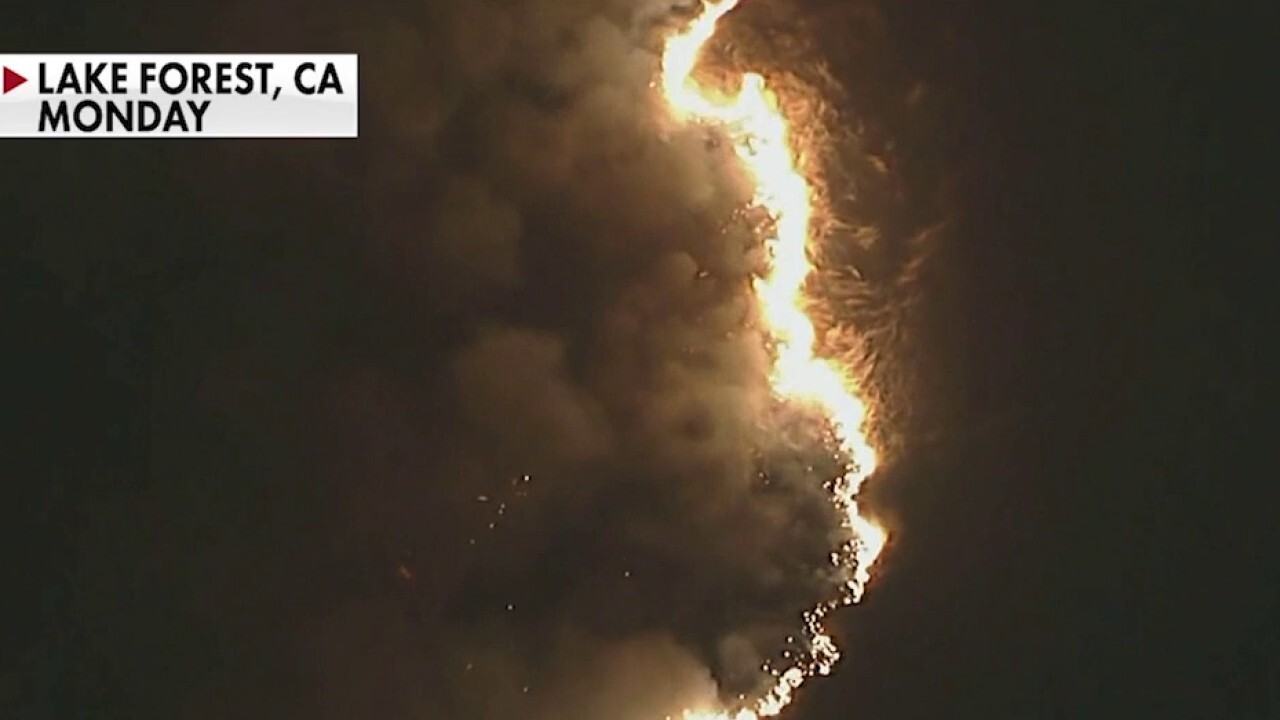 Hina Kalhoro told the Orange County Register her family had packed up and were ready to leave when the sheriff's advisory on Monday initially warned of a voluntary evacuation.

“We googled what you are supposed to take during an evacuation,” she said Tuesday.

The Blue Ridge Fire just to the north broke out several hours after the Silverado Fire near the city of Yorba Linda. At least 10 homes were damaged by flames.

While it's not yet known what caused the Blue Ridge Fire, utility Southern California Edison reported to state officials that it was investigating whether its equipment might have sparked the Silverado Fire.

Other than firefighters, no civilians have been killed or injured in either blaze. The OCFA shared on Tuesday that crews rescued a barn owl from the flames of the Silverado Fire.

“He’s safe and sound and currently with animal control," the agency tweeted.

The state of California has seen a record year for wildfires, with over four million acres burned well before the typical peak of the fire season in October and November. 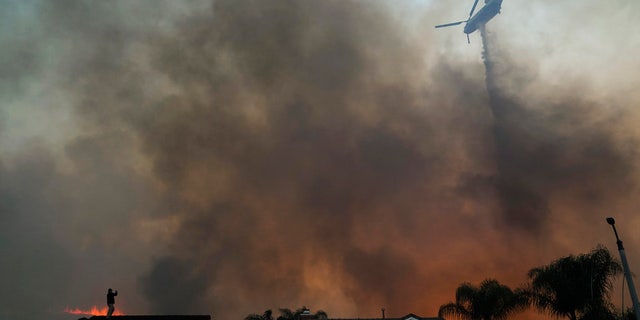 So far this year, 8,600 wildfires in the state have scorched a record 6,400 square miles and destroyed about 9,200 homes, businesses and other buildings. There have been 31 deaths.

Fox News' James Rogers and the Associated Press contributed to this report.