Michael Gove admitted driving with bad eyesight today as he leapt to the defence of his close friend Dominic Cummings.

Boris Johnson’s top aide  is facing increasing calls to resign after admitting driving 60 miles to a Durham beauty spot and back with his wife Mary and their son in the car during the coronavirus lockdown.

Mr Cummings claims he used the journey on his wife’s birthday to check his vision had recovered after a bout of suspected coronavirus in early April, having travelled 260 miles from London to Durham.

Sent out to bat for his Vote Leave ally this morning, Cabinet Office Minister Mr Gove told LBC radio he had done similar in the past.

Asked by presenter Nick Ferrari if he would have made the 60-mile round trip he said: ‘I have, on occasions in the past, driven with my wife in order to make sure, what’s the right way of putting it.’

He then added that ‘people who know me would know that I am not an authority on driving’ and said he took seven attempts to pass his driving test.

Section 96 of the Road Traffic Act 1988 states that: ‘If a person drives a motor vehicle on a road while his eyesight is such … that he cannot comply with any requirement as to eyesight … for the purposes of tests of competence to drive, he is guilty of an offence.’ 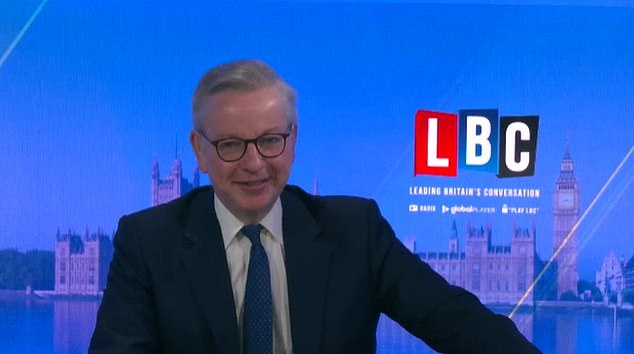 Asked by presenter Nick Ferrari if he would have made the 60-mile round trip Mr Gove said: ‘I have, on occasions in the past, driven with my wife in order to make sure, what’s the right way of putting it …’ 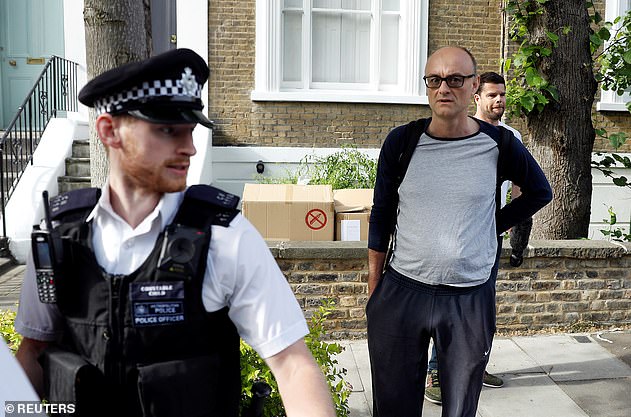 Dominic Cummings, pictured leaving his London home this morning, yesterday said he had no regrets about his 260 mile drive to Durham during lockdown

The law about driving with bad eyesight

It came as a Government minister resigned over Mr Cummings’ lockdown trip to Durham, delivering a massive blow to Boris Johnson and Downing Street.

Douglas Ross, the Parliamentary Under Secretary of State for Scotland and a Tory whip, announced this morning he is quitting the frontbench because he was unconvinced by Mr Cummings’ defence.

Mr Ross, the MP for Moray, said in his resignation letter: ‘I have constituents who didn’t get to say goodbye to loved ones; families who could not mourn together; people who didn’t visit sick relatives because they followed the guidance of the government.

‘I cannot in good faith tell them they were all wrong and one senior adviser to the government was right.’

The MP, who backed the UK staying in the EU in 2016, added that ‘Mr Cummings interpretation of the government advice was not shared by the vast majority of people who have done as the government asked’.

A Number 10 spokesman said Boris Johnson thanked Mr Ross for his ‘service to government and regrets his decision to stand down’.

Labour said Mr Ross had ‘done the decent thing’ by quitting a ‘government that is out of control’ while the SNP claimed it was ‘staggering’ a minister had quit ‘before the unelected adviser’.

The resignation of Mr Ross, a qualified football referee who has previously run the line in Champions League games, comes at the worst possible time for Mr Johnson and Mr Cummings as the Government tries to move on from the damaging row.

Number 10’s headache was only likely to increase as Tory MP Simon Jupp went public with his own criticism this morning as he said if he had been in the same situation as Mr Cummings he ‘wouldn’t have made the same decisions and would have since considered my position’.

Michael Gove had earlier defended the PM’s top aide as a ‘man of honour and integrity’ and said that ‘people will make their own mind up’ about the trip to Durham.