A couple have been left heartbroken after burglars broke into their home and stole their two prized pedigree British bulldogs.

Amanda Lloyd and her boyfriend Jay Junior, 21, returned to their flat in the Quinton area of Birmingham to find raiders had snatched beloved pets Rocco and Remy.

Police are now hunting the burglars who also took an XBox in the raid between 12pm and 3pm on Tuesday, amid fears the pets may have been stolen to order. 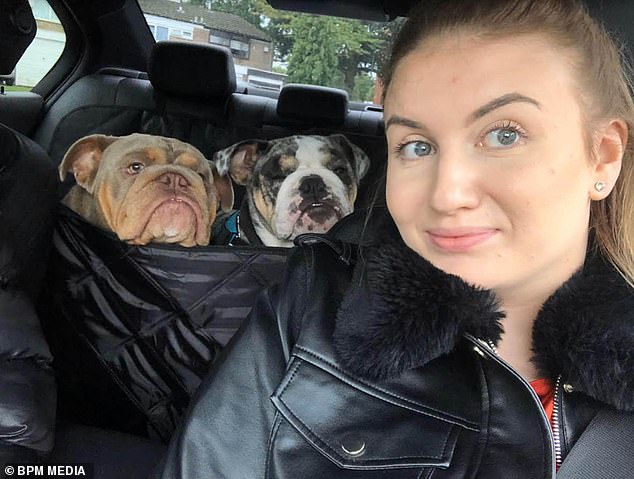 Amanda Lloyd, of Quinton, Birmingham, pictured with her beloved dogs Rocco and Remy 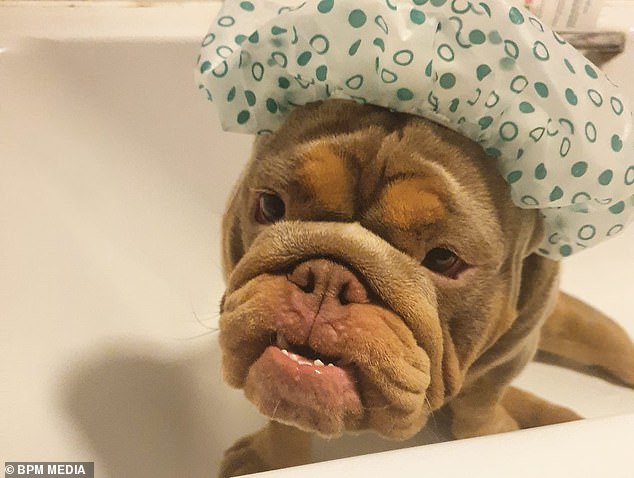 The couple have issued an appeal for the return of the dogs. Production engineer Mr Junior had been at his brother’s 18th birthday party when the crime happened.

He said: ‘The whole place was turned upside down. Personally I think I was targeted. I don’t think they were just petty burglars, I think they came for the dogs.

‘I’m a private person but I think the burglars or someone has seen me walking the dogs and going into the building. They’re pedigree rare British bulldogs.

‘Rocco is my boy, he’ll be one at the end of this month and Remy is ten months old. They’re both very distinctive dogs. If someone was driving down the road and saw the dogs they’d turn their head, you don’t see many dogs like these about. 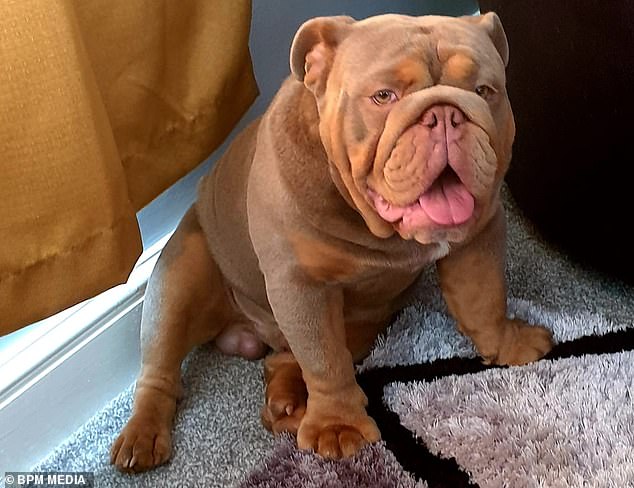 Rocco, who will be one year old this month, was described by owner Jay Junior as ‘my boy’

‘He loves everyone, he’s a big dope. In a way I am glad they are very friendly but they will go with anyone. Anyone who comes into the flat they would have seen as a friend.

‘He’s chipped, they also stole his black harness. Rocco is very short – he only stands 14 inches tall – but is very stocky and weighs 27 kilograms.

‘Remy is white, grey and black, she’s merle camouflage, multi coloured. She’s chipped too and had a canine camouflage harness. She has one blue eye. She had an operation on both eyes two weeks ago and is recovering from that.

‘She was doing fine but she needs eye drops which the burglars didn’t take. They also took the chip details for both dogs and their Kennel Club papers, basically all their pedigree paperwork.

‘They had to search the flat for that paperwork, they obviously wanted it. They took the dogs’ vaccination paperwork, so they have everything.’ 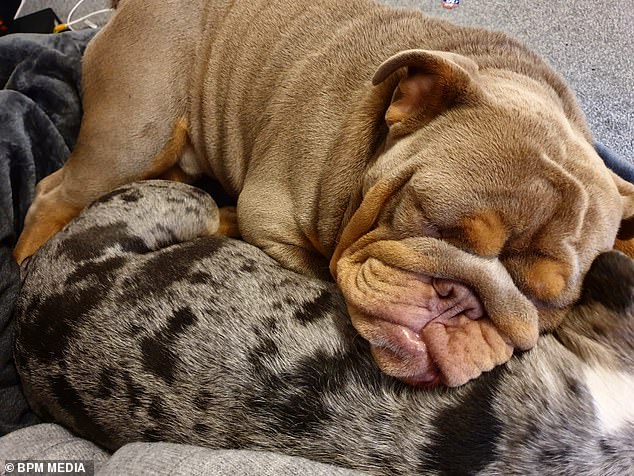 Remy is white, grey and black. She is also chipped and had a canine camouflage harness

Miss Lloyd was at the gym at the time of the break-in. She said: ‘I know they’re perhaps just dogs to some people, but they were like our babies.

‘We’re absolutely devastated. Our families and friends are helping us try to raise awareness of what’s happened. I put an appeal on Facebook and it’s had more than 13,000 shares. 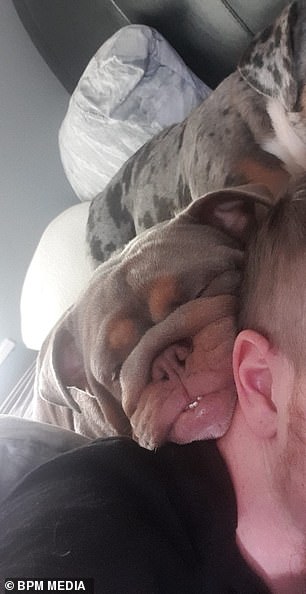 The couple, who live in Birmingham, have issued an appeal for the return of the dogs

‘We don’t feel the police have done anything much to help. It took them hours to come out and when they did they just looked round. They are not sending out forensics to the flat until today.

‘They didn’t give us much hope. We’re appealing to the public to help spread the word about the dogs and contact us with any information, any sightings, anything that might help.

Close to tears, she added: ‘I came home and was calling them and they didn’t come out to see me and I didn’t understand it. I couldn’t believe they were gone.

‘The dogs went everywhere with us. The back of our car is full of their stuff, we didn’t like leaving them on their own when we didn’t have to.

‘We adore them. I’m terrified they could be shipped off to a breeding farm. We think the people who took them were professionals who knew what they wanted and the paperwork they needed.’

The couple are now hoping for a breakthrough in the case. Miss Lloyd said: ‘We’ve spoken to all our neighbours but none had CCTV. 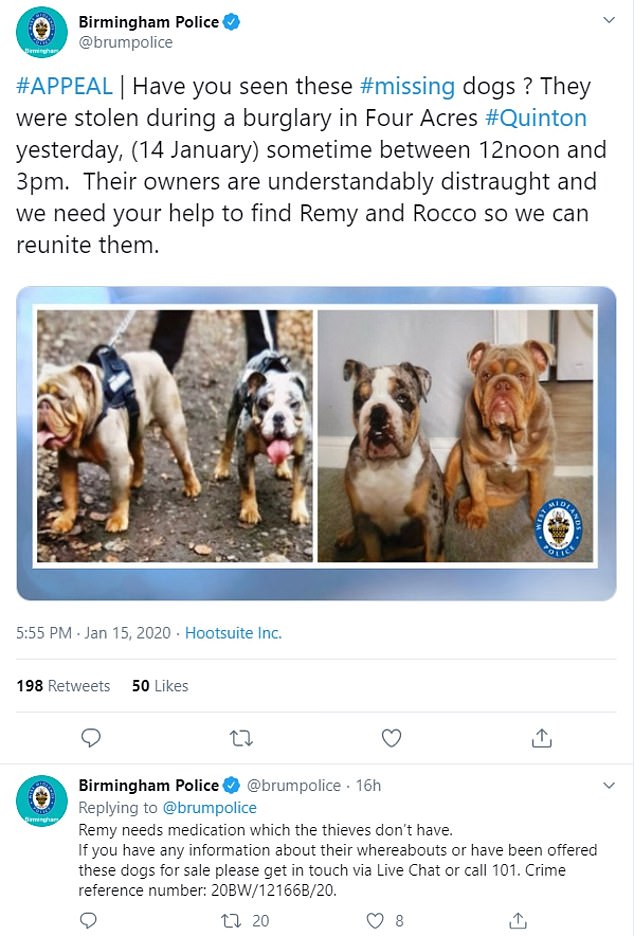 A West Midlands Police appeal on Twitter yesterday said: ‘Have you seen these missing dogs?’

‘We’ve been told of a sighting of one dog that looked like Remy being walked by a woman along Middle Leasow, Quinton, at about 4pm the day the dogs were taken.

‘It didn’t have a lead on. That’s just a two minute walk from us. We’re trying to find out more information.’

A West Midlands Police appeal said: ‘Have you seen these missing dogs? They were stolen during a burglary in Quinton on January 14 sometime between 12 noon and 3pm.

‘Their owners are understandably distraught and we need your help to find Remy and Rocco so we can reunite them. Remy needs medication which the thieves don’t have.

‘If you have any information about their whereabouts or have been offered these dogs for sale please get in touch via Live Chat or call 101. Crime reference number: 20BW/12166B/20.’