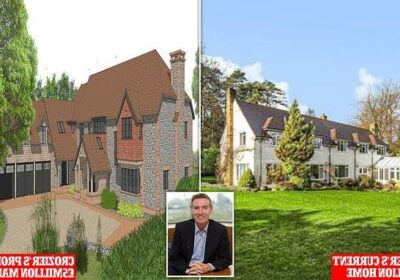 Former Football Association boss Adam Crozier who is now the chairman of BT wants to demolish his new £3million home – so he can replace it with a dream mansion.

Crozier, 57, who has also had spells as chief executive of ITV and Royal Mail splashed out the eye watering sum on the five bedroom house just six months ago.

He and his wife Annette have now submitted plans to bulldoze the property and build a new ‘Arts & Crafts’-style mansion in its place on a private estate in Surrey.

Crozier’s proposed new home has a swimming pool and jacuzzi in its landscaped grounds as well as adaptations to help their adult learning disabled daughter.

The plans include a bedroom and studio flat accommodation above a garage which is connected to the main house and is for the use of their daughter’s carer. 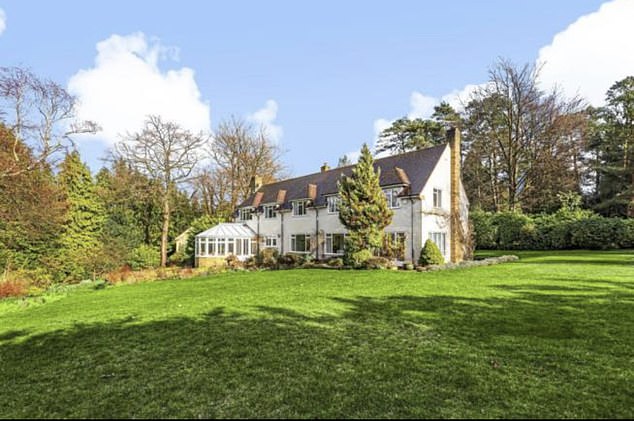 Adam Crozier, the former boss of the Football Association, has submitted plans to bulldoze his £3million five-bedroom home (pictured) in Surrey, which he bought just six months ago, so he can replace it with a mansion worth around £5million 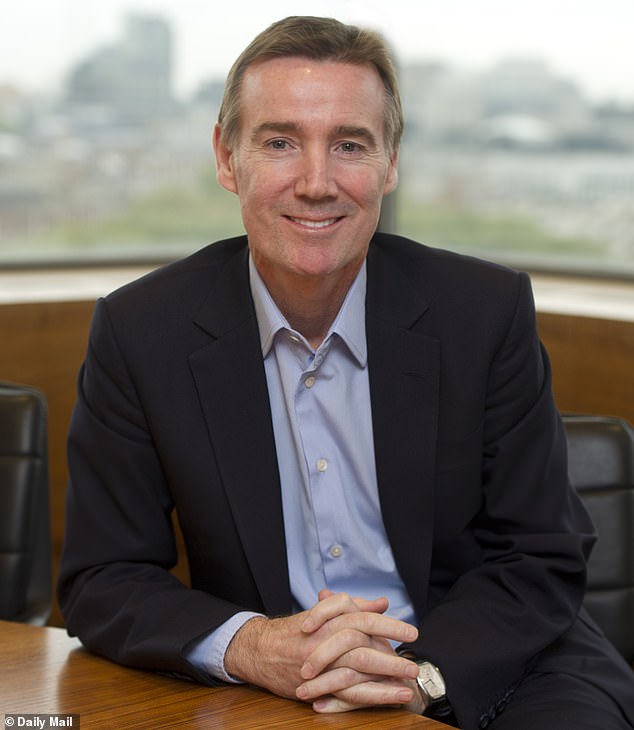 But Crozier who earns a reported £700,000 a year faces having to take steps to protect bats if he gets the go-ahead to build the new house worth around £5million.

Planning documents reveal that a bat survey identified droppings from brown long-eared bats in the attic of the existing house which was built in the early 1960s and has been remodelled several times over the years.

A design and access statement accompanying his planning application states: ‘The number of droppings recorded indicated occasional use by individual bats.’

As a result, the report predicts that a European Protected Species Licence will need to be obtained to allow the project to proceed.

The plans propose that four bat boxes be installed on adjacent trees during the building work to create somewhere for the creatures to roost.

Architects insist that the bat survey and an ecological report show that the demolition and building of a new home should have ‘no detrimental impact on ecological interests’ and would ‘enhance biodiversity’.

The proposed new house has a ground floor hall, sitting room, study, kitchen, dining room, a lift, a snug, verandah, as well as a communications and electrics room.

There is also a jacuzzi under an oak-framed covered terrace leading from a snug room off the family kitchen.

Plans show that the terrace will step down to an area of natural stone paving surrounding an outdoor swimming pool overlooked by a Gaze Burvill curved bench seat. 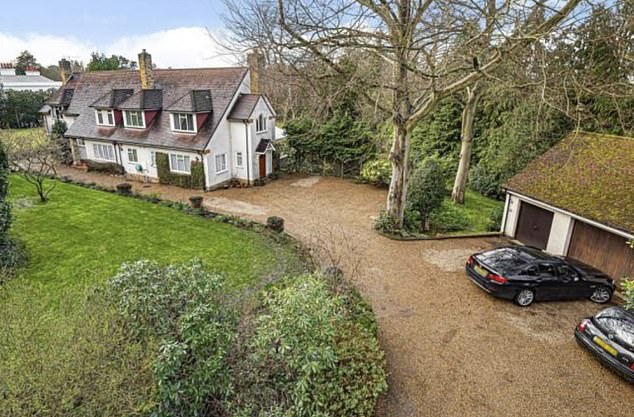 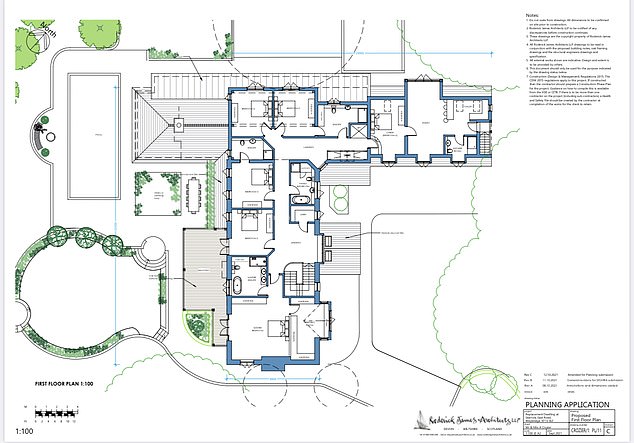 The floor plans for the proposed new house which has a ground floor hall, sitting room, study, kitchen, dining room, a lift, a snug, verandah, as well as a communications and electrics room

The design statement says that Crozier and his wife want to create an ‘Arts & Crafts style family home that provides comfortable and informal accommodation with a sense of established heritage.’

It adds: ‘The applicants see this proposal as their forever family home where grandchildren will come to stay and where they can make provision for their adult learning disabled daughter, cared for at home, supported overnight with a carer.

‘The proposed dwelling has been rotated to benefit the sunlight and views over the garden to the south.

‘Leading off from the family kitchen/living room is an oak-framed covered terrace with Jacuzzi, which steps down to natural stone paving surrounding the swimming pool.

‘The existing buildings on the site are of limited merit and require considerable refurbishment and as a consequence the applicants have decided to replace with a single holistic design.

‘Mr and Mrs Crozier are committed to a long-term approach to the house and site. They would like to erect a replacement house of good quality, natural materials and implement a sensitive landscaping plan, which will conserve and reinforce the existing natural landscape.’

The statement goes on to say that the new house will have air source heating and ‘rainwater harvesting to meet and exceed current building standards for energy and water efficiency’.

It add that the house will be ‘highly efficient’ through ‘optimised insulation levels, passive solar gain and thermal mass’. 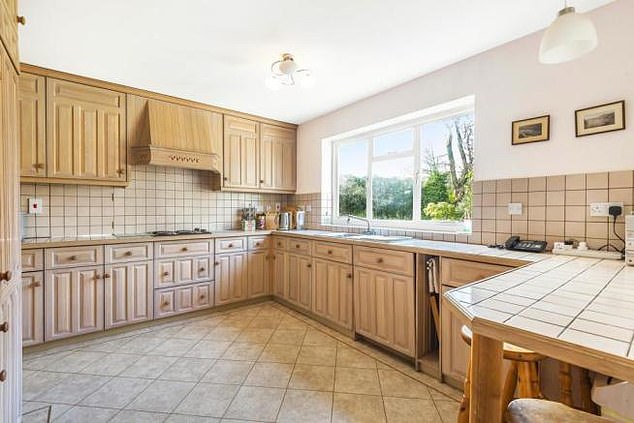 Crozier’s current home, located on a private estate in Weybridge, Surrey, is thought to cost around £3million 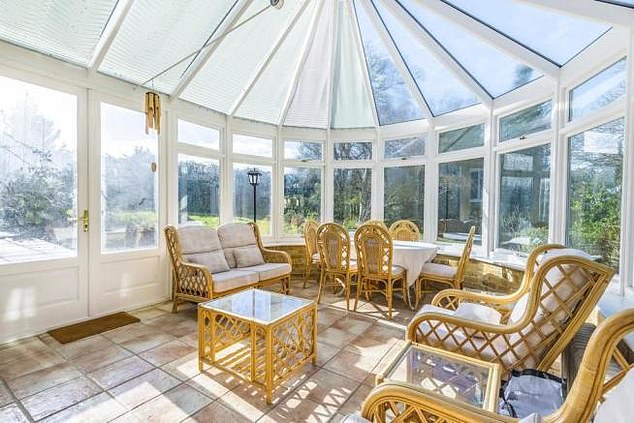 The plans, submitted by Crozier and his wife, would see their current home bulldozed and a new mansion built in its place 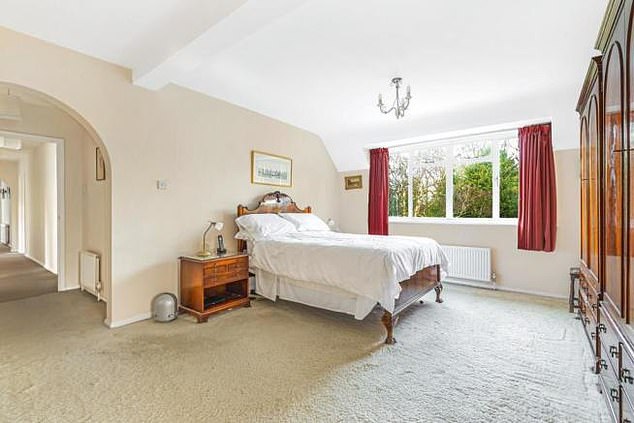 The exclusive area around the current house is home to celebrities including TV presenters Eamonn Holmes and Michael Aspel, and Dragons’ Den star Theo Pathitis

Elmbridge Borough Council is set to decide whether to grant planning consent for the project in the New Year, but no neighbours have so far objected.

The exclusive area around the house is home to celebrities including TV presenters Eamonn Holmes and Michael Aspel, and Dragons’ Den star Theo Pathitis, as well as a number of Russian tycoons.

Crozier has had a string of leading roles in big name organisations, but not without controversy.

He was chief executive of The Football Association from 1999 until 2002 when he modernised and reorganised the institution, and dramatically increased revenues.

Crozier also brought in Sven-Goran Eriksson as the national team’s first non-English coach and proceeded with plans for a new Wembley stadium.

But he was accused of sometimes acting beyond his brief, acting with a lack of consultation and raising expectations too high.

He became chief executive of the Royal Mail between 2003 and 2010 when he oversaw a programme of modernisation and redundancies.

Under his leadership, around 5,800 local post offices were closed with the second post and Sunday collections axed to save costs.

The price of a first-class stamp also jumped up by 14p to a record 41p during his tenure.

He was made chief executive of ITV from 2010 to 2017 and took up his top role at BT earlier this month.

Even though he has had prominent business roles, Crozier has previously admitted he hates publicity and is ‘softly spoken’.

The Scotsman told the Guardian in 2007: ‘I hate it, absolutely hate it. The bizarre thing about the last three jobs I’ve done is that I don’t like [the public profile] at all.’

He added: ‘I will go to enormous lengths not to do public things – because it is just not me.’