Britons among quarantined passengers on cruise ship docking in Italy ‘They wanted to take us into the mouth of the virus’: Terrified Britons among hundreds of coronavirus quarantined passengers on board cruise ship as it docks near Rome after diverting from Venice

A group of terrified British holidaymakers are among hundreds of quarantined passengers on board a cruise ship that docked in coronavirus-hit Italy today.

The Costa Victoria has already been denied entry into ports in both Asia and Europe including Croatia, the UAE and Israel.

The vessel has been looking for a safe port after an Argentine woman who fell ill with respiratory problems tested positive for the virus and disembarked in Greece.

Briton Rimal Shah was on the ship with 18 friends from London – most of them in their 70s with pre-existing health conditions.

The 56-year-old said there was ‘a lot of anxiety on board’ about being taken to Italy, where coronavirus deaths have now surpassed China.

He said: ‘They wanted to take us into the mouth of the virus.

‘That woman with the coronavirus will have been roaming the ship for days before being disembarked.’ 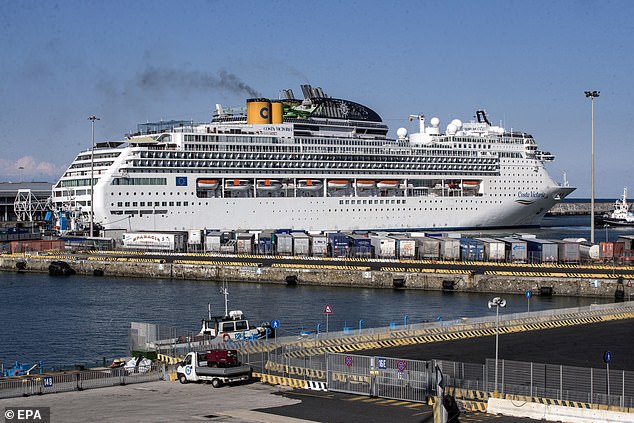 Cruiser Costa Victoria arriving in the port of Civitavecchia, Italy, today. The Italian flagged ship had been denied entry to other ports in Asia and Europe due to coronavirus fears 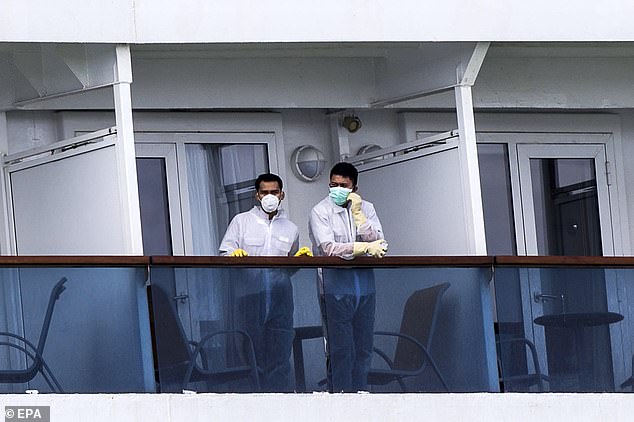 All 726 international passengers were placed in lockdown in their cabins on Monday after the woman, 63, was taken off the ship in Crete.

The liner had been due to sail to Venice, but frightened passengers had begged not to be taken to northern Italy.

The region has been hit particularly hard by a highly infectious disease that has claimed over 6,800 lives across the country so far.

Italian health authorities boarded the Victoria on its arrival, but Dutch passenger Hans Rijkelijkhuizen said the passengers had not been tested.

He and the Spanish and German couples in his neighbouring cabins waited anxiously for news, picking listlessly at their lunch of pasta, chips, rice and a king prawn.

Rijkelijkhuizen said from aboard the Costa Victoria: ‘We’re all very, very, very concerned.’

‘There are lots of people on board with a temperature,’ said the 78-year-old who was on the cruise with his 74-year old wife. 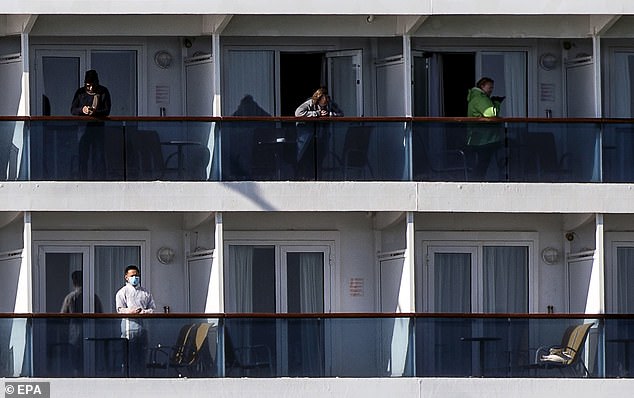 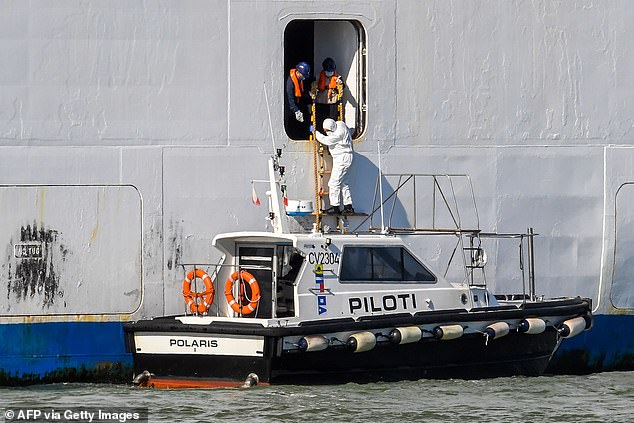 Rijkelijkhuizen, who had a slight fever and a cough, said many, including he and his wife, had been given paracetamol by the ship doctor.

‘Do we have the virus? We don’t know,’ he said, standing on the tiny balcony of his cabin in a red wind jacket.

Most of the liner’s balconies were empty. On one, a lone figure could be seen jogging on the spot for exercise.

A message in multiple languages over loudspeaker called passengers from specific decks to the ship’s theatre to have their temperatures taken, while warning all others: ‘Stay in your cabins.’

Civitavecchia’s mayor Ernesto Tedesco said he had tried to stop the liner, which has a large number of Australian and French passengers, from docking – but had been overruled.

Those given the green light to disembark would be allowed off on Thursday morning, he said. 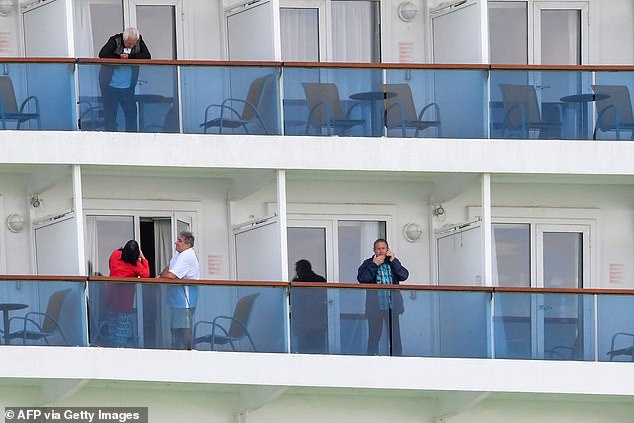 Hans Rijkelijkhuizen (centre), a passenger from The Netherlands, speaking on his mobile phone as fellow passengers talk to each other, aboard Italy’s Costa Cruises ship Costa Victoria 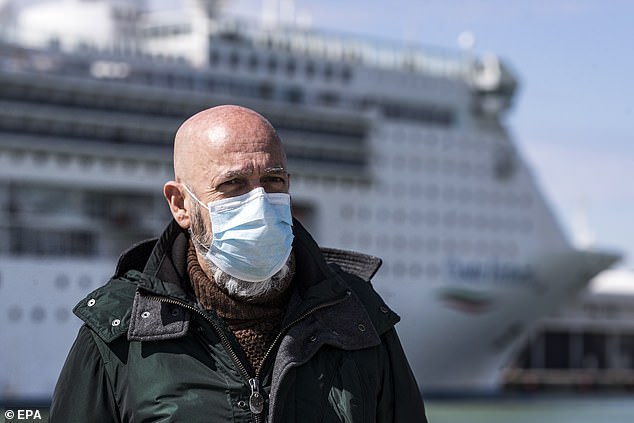 ‘I expect anyone with the virus to be quarantined on the ship. Those who disembark will not be allowed in my town. I don’t want suitcase-wheeling tourists here,’ he said.

Those allowed off the Victoria would likely be put on coaches and taken directly to Rome’s Fiumicino airport, the mayor said.

Shah said he had been lobbying the British government to fly his group home.

He had repeatedly requested Costa cancel the cruise early in the month-long trip, when stop after stop was cancelled, but had been ‘stonewalled’.

Another Costa cruise ship with suspected coronavirus cases, the Diadema, was also making its way to Italy. It is expected to arrive in Civitavecchia on Friday.

The 1,255 people on board were all crew members and had been isolated in their cabins, Costa said, after a crew member who was disembarked in Dubai on March 13 tested positive.

Another with breathing difficulties had since also been disembarked and hospitalised, while five more were showing flu-like symptoms, the company said.