Britain’s post Brexit immigration plan could be delayed again – making it more than a year late, it today emerged.

The Cabinet did not get around to discussing long-delayed white paper at this morning’s meeting as discussions on how to ramp up no deal Brexit planning overran.

And it also emerged today that the draft plan contains no mention of cutting net migration to the tens of thousands.

The promise is a flagship Tory policy announced by David Cameron in 2010 an championed by Theresa May first in the Home Office and then No10.

On the target, a Whitehall source said: ‘It’s not in there and it won’t be unless someone slips it in at the last minute.’

But it has been long-delayed and the department has had a change of Home Secretary as ministers have been remained locked in talks about the plans. 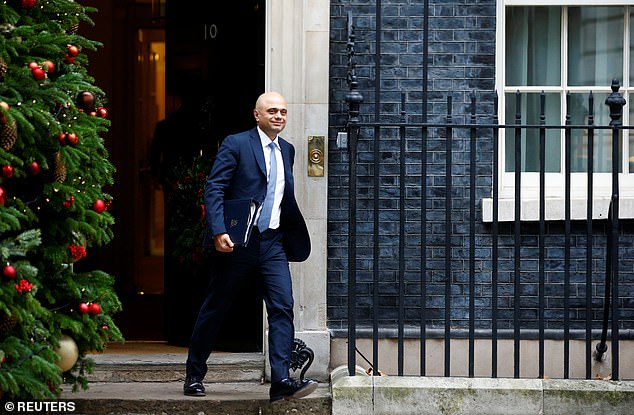 Home Secretary Sajid Javid (pictured in Downing Street today) had promised the long-delayed white paper would be published by the end of the year, but it looks set to be kicked back until after Christmas

Home Secretary Sajid Javid announced another delay to the immigration white paper earlier this month and it had been penciled in to be finally made public tomorrow.

But it now looks set to be kicked back once again until after the Christmas break.

Government sources told MailOnline it is ‘very unlikely’ the plan will be punished this week.

Senior ministers had been due to discuss the white paper at this morning’s Cabinet meeting, but they did not get to the topic after Brexit no deal talks overran.

It comes after the Daily Mail today revealed that ministers are split over how many migrants to allow into Britain after Brexit.

Chancellor Philip Hammond and Business Secretary Greg Clark are pushing for a proposed minimum salary for people coming to the UK to be reduced or be exempt for certain jobs.

Ministers had promised to set out by the end of this week the rules for EU migrants coming to Britain when freedom of movement ends after Brexit.

Whitehall sources said Cabinet divisions centred on a proposal that skilled migrants will have to earn at least £30,000 before being allowed in on five-year visas.

Mr Hammond and Mr Clark have raised concerns about extending the salary threshold, which currently applies to non-EU migrants, to people from the EU.

It is understood they want the earnings figure to be lowered or exempt in certain sectors.

Last night a Whitehall source said: ‘The £30,000 figure has not been nailed down, which is why the White Paper might not be this week. 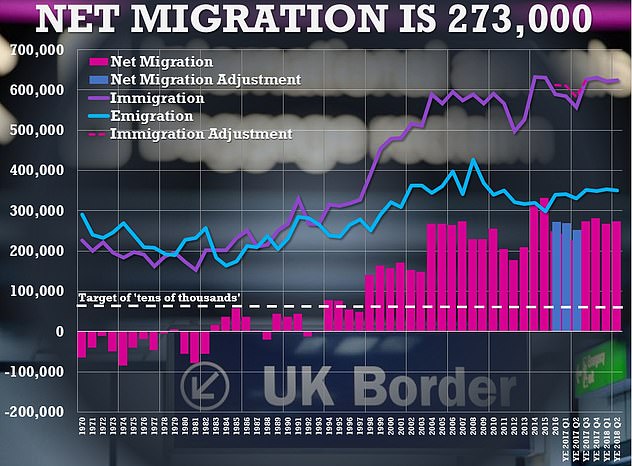 Net immigration to Britain rose to 273,000 in the first half of 2018 despite a continued fall in arrivals from the EU according to ONS data out last month (pictured)

‘We are still aiming to publish on Wednesday but that is looking unlikely.’

Under the plans, low-skilled workers will only be allowed to apply for one-year visas.

Once they expire, they will have to leave Britain and can only return after a ‘cooling off period’.

The immigration paper has now been delayed for more than a year as ministers have repeatedly failed to agree.

Last month Mr Javid had said the proposals would come before the end of the year.