Michael Gove has warned of Brexit border chaos, with queues of up to 7,000 trucks in Kent and two-day trade delays in a ‘worst case scanario’ letter to the freight industry.

The Minister for the Cabinet Office, who is responsible for no-deal planning, has written to logistics groups with the Government’s ‘reasonable worst-case scenario’ planning, which warns of possible two-day delays for cargo travelling to France in January.

Mr Gove is due to outline the scenario work, which the Cabinet Office stressed is not a forecast, in the Commons later today. 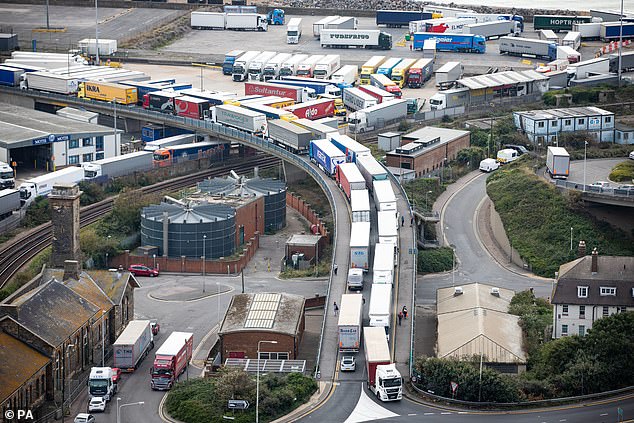 Michael Gove has warned hauliers that up to 7,000 lorries could be queuing from Channel ports such as Dover, pictured last Wednesday, at the end of the Brexit transition period

It comes as the European Union’s chief negotiator Michel Barnier prepares to travel to London for further informal talks with his counterpart Lord Frost as efforts continue to strike a post-Brexit trade deal.

But in the document sent to logistics associations, which has been seen by PA news agency, Mr Gove warned that changes were coming with or without a deal.

The transition period, which kept the UK aligned to the EU’s single market and customs union rules to allow trade to flow smoothly after Brexit, expires at the end of the year unless both sides agree to an extension – something Boris Johnson has ruled out.

The Cabinet Office document states that, in its reasonable worst-case scenario, between 30-50% of trucks crossing the Channel will not be ready for the new regulations coming into force on January 1 2021, while a ‘lack of capacity to hold unready trucks at French ports’ could reduce the flow of traffic across the strait to 60-80% of normal levels. 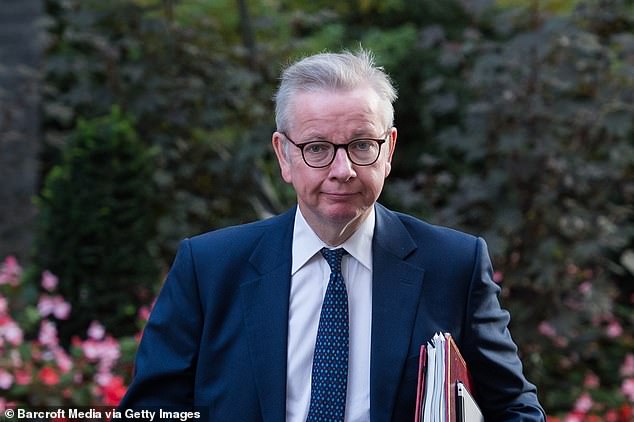 In a letter to the freight industry, Mr Gove, pictured on Tuesday, said: ‘It is essential that traders act now and get ready for new formalities’

‘This could lead to maximum queues of 7,000 port bound trucks in Kent and associated maximum delays of up to two days,’ the documents said.

Such delays could be in place for at least three months, hauliers have been warned, as alternative routes are sought and supply chains get to grips with the new systems and requirements.

In his letter, Mr Gove said: ‘Irrespective of the outcome of negotiations between the UK and EU, traders will face new customs controls and processes.

‘Simply put, if traders, both in the UK and EU, have not completed the right paperwork, their goods will be stopped when entering the EU and disruption will occur.

‘It is essential that traders act now and get ready for new formalities.’

But sector chiefs have accused the Government of failing to do enough in recent weeks over the threat of post-Brexit border delays.

Logistics UK, formerly the Freight Transport Association, was seething last week after being told the Government’s Smart Freight system – designed to reduce the risk of cargo delays once Britain is outside of EU rules – would still be in testing mode in January when British exports face new border regulations.

The Road Haulage Association (RHA), meanwhile, said their meeting on Thursday with Mr Gove had fallen ‘far short of our expectations’.

Responding to the worst-case scenario document, RHA chief executive Richard Burnett said: ‘We’ve been consistently warning the Government that there will be delays at ports but they’re just not engaging with industry on coming up with solutions. 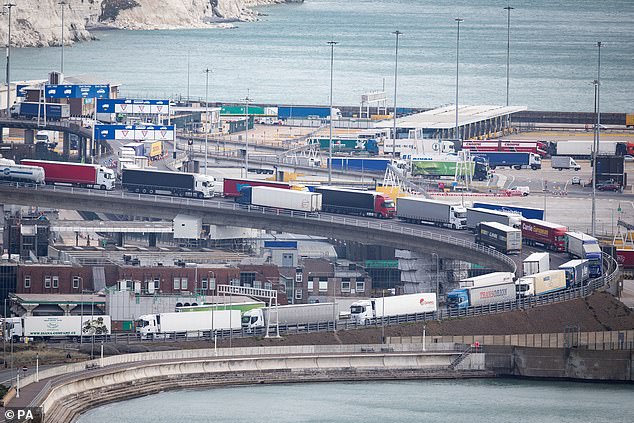 ‘Traders need 50,000 more customs intermediaries to handle the mountain of new paperwork after transition but Government support to recruit and train those extra people is woefully inadequate.

‘The answers to the questions that we raised in our letter to Mr Gove and subsequent roundtable meeting last Thursday still remain unanswered – and our concern continues to grow.’

There has been reported action by Government to mitigate the impact around Dover and the south-east ports, however.

There was a suggestion this month a coronavirus testing centre in Ebbsfleet, Kent, was closed to make way for a post-Brexit lorry park to allow customs checks away to be carried out away from the Port of Dover.

A UK Government spokesman said: ‘With just 100 days to go until the end of the transition period it’s vital that businesses prepare now for new rules that will come into force at the end of the year, so that they can hit the ground running on January 1 2021 and seize new opportunities.

‘As a responsible Government we continue to make extensive preparations for a wide range of scenarios, including the reasonable worst case.

‘This is not a forecast or prediction of what will happen but rather a stretching scenario.’

The leaked letter comes as a think tank said failure to reach an agreement with the EU in post-Brexit trade talks could hit Britain’s economy three times harder in the long term than coronavirus.

Queues at the border, shortages of fresh food and medicine as well as more ‘hassle’ travelling to the continent are also possible, according to the UK in a Changing Europe group.

A report by the organisation, based on modelling with the London School of Economics (LSE), said the impacts of coronavirus may mitigate or obscure the effect of a no-deal exit.

But it warned that not forming an agreement with Brussels would have a significant impact in the long term.

The authors wrote: ‘Our modelling with LSE of the impact of a no-deal Brexit suggests that the total cost to the UK economy over the longer term will be two to three times as large as that implied by the Bank of England’s forecast for the impact of Covid-19.’

Trade deal talks between the two sides are continuing, but the Prime Minister has set a deadline of October 15 for an agreement to be reached, otherwise he has said he will simply walk away from the negotiating table.