A poll from Datafolha found that 37% of those surveyed viewed his government as great or good – up from 32% in June.

Bolsonaro’s rejection rating has dropped by 10 points, with 34% now viewing his government as bad or terrible.

The president, 65, has faced intense criticism for rejecting social distancing and lockdowns to curb the pandemic, which has yet to reach its peak in Brazil. 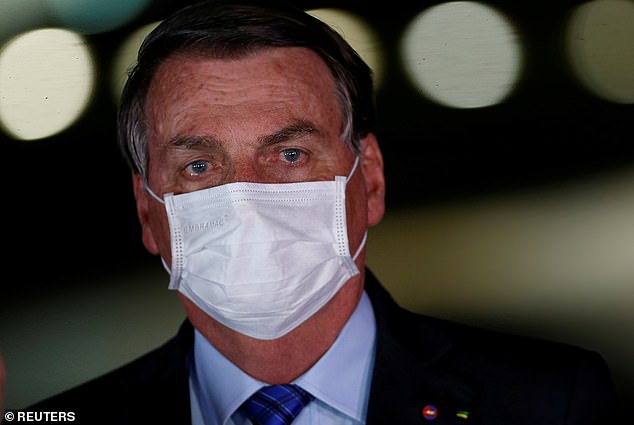 Bolsonaro, who recently recovered from a bout of Covid-19, welcomed the poll numbers and joked on Twitter: ‘Truth, half truth or fake News? Good morning, all.’

Bolsonaro has also been heavily condemned for downplaying the virus and famously compared it to a ‘little flu’.

He regularly hit the streets with no face mask until he got infected, shaking hands and taking pictures with supporters at rallies.

The country of 210 million is suffering the world’s second-worst coronavirus outbreak – after the US –  with 3.22 million confirmed cases and 105,463 deaths.

Brazil is also seeing an upward trend in cases, with 60,091 new diagnoses made in the 24 hours to August 14.

Datafolha said the poll shows Bolsonaro’s main gains have been in the poorer and most vulnerable sectors of Brazilian society.

These areas have received emergency aid to make up for lost incomes.

Bolsonaro, who recently recovered from a bout of Covid-19, welcomed the poll numbers and joked on Twitter: ‘Truth, half truth or fake News? Good morning, all.’

His spike in popularity comes as the government makes emergency 600 reais monthly payments to low-paid and casual workers, at a total cost of more than 250 billion reais ($47 billion).

The government is considering extending the payments as they expire in September.

As in many countries, experts believe Brazil’s numbers are severely undercounted due to insufficient testing.

In a tribute to Covid-19 victims, the non-governmental group Rio de Paz placed crosses and a thousand red balloons on the sand on the famed Copacabana beach.

Datafolha said the emergency relief program made the most impact on Bolsonaro’s approval standing in Northeast Brazil, a traditionally poor region where voters could decide his re-election chances in 2022. 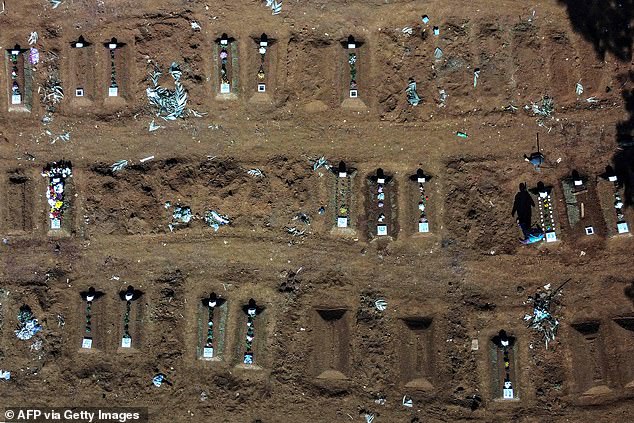 Aerial view of the Vila Formosa Cemetery, in the outskirts of Sao Paulo, Brazil, where thousands of mass graves were dug to deal with the explosion in deaths 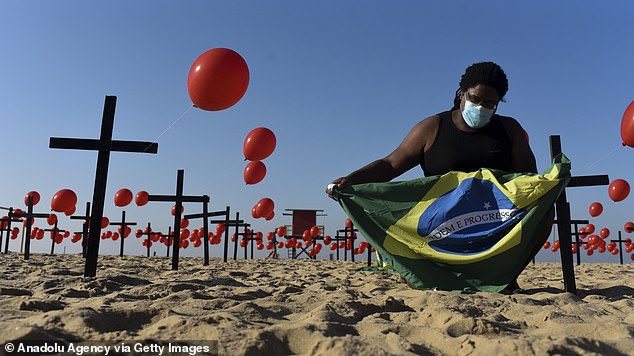 The president’s negative numbers dropped from 52% to 35% in the region.

Like US President Donald Trump, whom he admires, Bolsonaro, 65, touts the anti-malaria drugs chloroquine and hydroxychloroquine as promising treatments.

He allegedly took the latter himself, despite a lack of evidence of their effectiveness against COVID-19.

Bolsonaro is on his third health minister since the pandemic reached Brazil five months ago, after falling out with two doctors who previously held the post over their recommendations on containing the virus.

The current interim minister is Eduardo Pazuello, a military general with no prior medical experience.

Pazuello abandoned the call for social distancing, which experts say is essential but the president has opposed.

Datafolha carried out the poll with 2,065 respondents. The margin of error was two percentage points.