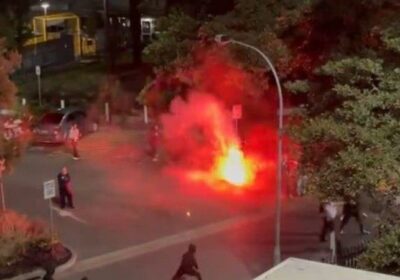 Police have launched an investigation after multiple flares were lit and a brawl broke out at the end of an Australia Cup soccer match in Sydney’s inner-west on Sunday night.

Police were called to the game at Leichhardt Oval in Lilyfield after Sydney FC’s penalty shootout win against the Central Coast Mariners following reports a fight had broken out outside at the stadium.

Officers from Leichhardt Police Area Command arrived about 7.30pm alongside the NSW Police riot squad and the crowd dispersed.

Police are now investigating the circumstances that led to the incident and are searching for those involved.

A Sydney FC spokeswoman said those involved in the fight did not watch the game and were not wearing any club colours at the time.

“Sydney FC were disappointed to see the incident that took place outside Leichhardt Oval at the conclusion of the Australia Cup match,” the spokeswoman for the club said.

“As far as we are aware, the parties involved had not attended the match, and we are grateful to stadium security and NSW Police who cleared the area within minutes.

“Football is the most inclusive, safe and welcoming sport and those involved do not represent our game.”