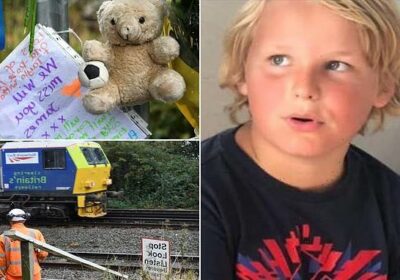 Boy, 12, was electrocuted on train tracks after he slipped on wet sleeper while playing ‘flip the bottle’ game with friend, inquest hears

A boy was electrocuted after slipping onto live high voltage train tracks while playing the popular ‘flip the bottle’ game, an inquest has heard.

James Myers, 12, was playing the bottle game with a friend in Bootle, Merseyside, when he decided to climb up railings and drop down from a bridge onto the tracks.

But when the youngster was retrieving the bottle, the recent rain meant he slipped on a damp wooden sleeper and stumbled onto the 630-voltage current line.

Tragically, he was electrocuted and died instantly.

James’ parents, Sharon and Kevin, have demanded answers of Network Rail as they say their son’s death has ‘damaged their lives forever’.

An inquest heard how James was attempting the ‘flip the bottle’ challenge, a craze which became popular in 2016, and involves tossing a bottle with liquid in the air and trying to make it land on its base again. 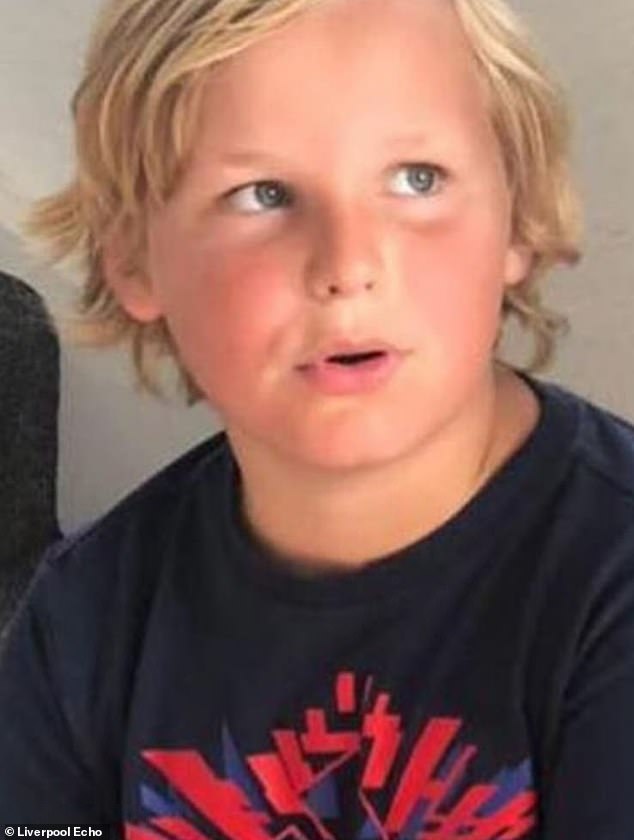 The youngster had been playing the popular ‘flip the bottle’ game with friends when the container fell onto live tracks, which prompted James (above) to go and retrieve it 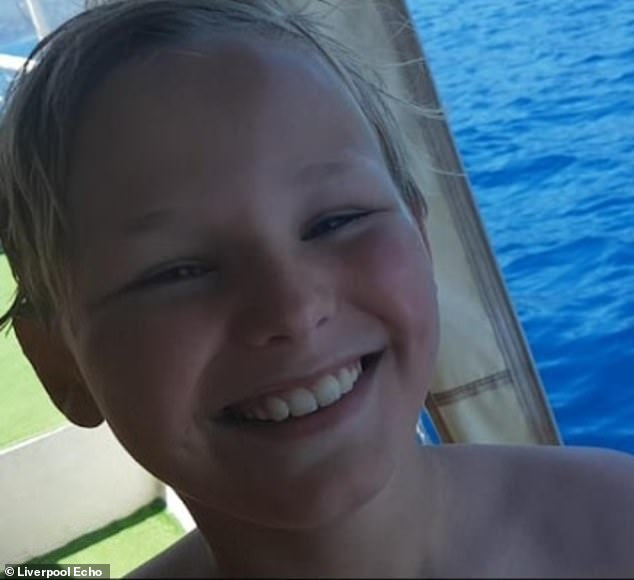 James Myers, 12, (pictured) was instantly killed when he climbed over railings and slipped onto 630-voltage live train tracks in Bedford Road, Bootle 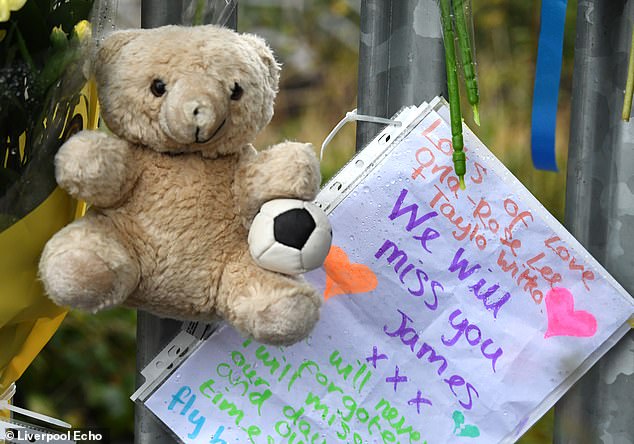 But the container was accidentally thrown onto the line, on the evening of Monday, October 14, 2019.

He waited for a train to go past, the coroner’s officer said, and then attempted to gain access to the track, shimmying up a 6ft railing, getting himself onto a stone parapet above, and then dropped down from the overhead metal bridge to reach the tracks.

But the Newfield School pupil slipped and fell onto the live lines, which caused ‘catastrophic’ injuries, Bootle Town Hall heard.

Detective Sergeant Ian Henderson, from British Transport Police, said James and his friend had intended to ‘produce a bottle flipping video’, which ‘if successful, [if done on the railway line], would be a little more extreme.’

The officer said there had been no serious injuries or fatalities at that Bedford Road spot in the years leading up to the tragedy, and that there were a number of obstacles to prevent people getting on the tracks.

The inquest heard how James’ friend attempted to remove him from the line after he was injured, pulling at his clothes, and also attempted CPR.

But coroner Julie Goulding said: ‘With that kind of voltage, death is instantaneous, sadly this was a catastrophic fatal injury.

‘James was out playing, having fun, but tragically slipped and fell on the live line.

At the time of the tragedy, locals told how James’ desperate friend called to a man walking past with his dog, begging him: ‘Mister, mister, my friend’s on the line, don’t leave me!’

A nearby neighbour spoke to police on a mobile phone and tried to calm down the very upset pal.

Coroner Goulding described James as a ‘lively young 12-year-old boy, full of adventure and fun, and I’m sure that’s how he’ll be remembered.’ 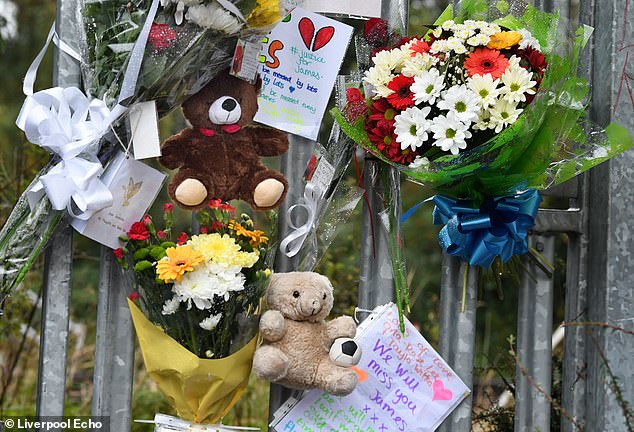 Floral tributes to young James Myers were left at the scene in Bedford Road, Bootle

The cause of death was given as electrocution and a conclusion of accident recorded.

Ms Goulding ended proceedings by telling James’ parents – mum Sharon and dad Kevin, along with his two brothers, and other relatives who attended at Bootle Town Hall: ‘My deepest condolences for the loss you’ve had to face.

‘I can only imagine how difficult today has been for you all.’

The hearing was told how, since the tragedy, Network Rail had carried out repairs at the location with extra and more robust fencing to prevent people accessing the tracks again.

But following the inquest, parents Sharon and Kevin demanded answers of Network Rail who manage access and measures to stop people getting onto the network.

Sgt Ian Henderson said it was now ‘impossible’ for someone to get onto the dangerous lines from that location.

The comment prompted a Myers family member to interject the proceedings, and say: ‘It shouldn’t have been like that in the first place.’ 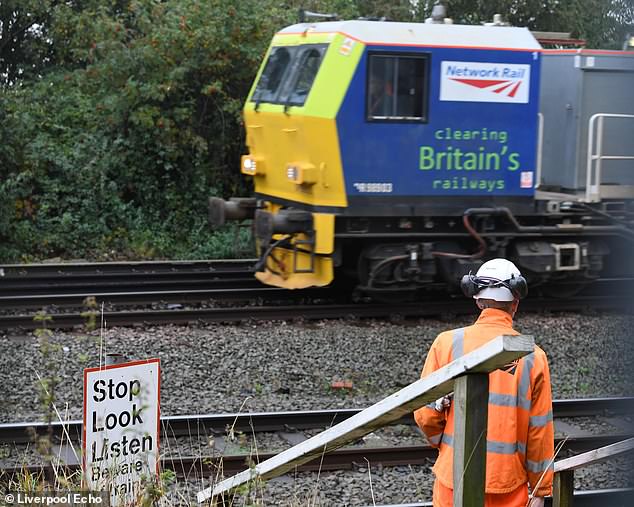 His parents, Sharon and Kevin, demanded answers of Network Rail who manage the access of their network

Mum Sharon later said: ‘We are disappointed Network Rail have never responded to us in any way at all, with no apology or a reply.

‘His death has damaged our lives forever, we’ll never get to see him grow up, or give us grandchildren, or get married…

‘We see kids in the street and we think, what would James be like now?

‘The authorities say those railings are 6ft, but it’s much lower, it’s just a stepping stone to a 12-year-old.

‘The very next day a friend of James’ was back on the line.

‘It took Network Rail up to nine months to fix those railings.’

‘I relieve the moment a police officer came and knocked on the door, when they told me James was dead.’