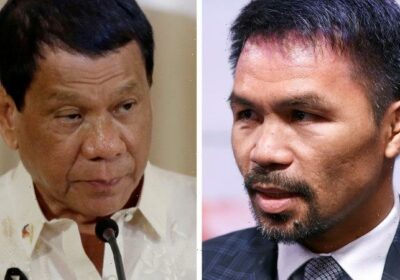 Pacquiao, 42, was nominated by a faction of PDP-Laban, the ruling party that fielded Duterte in 2016. 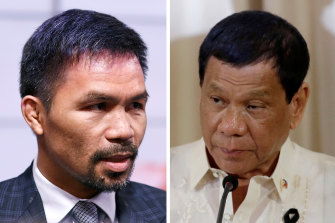 “I am a fighter and I will always be a fighter inside and outside the ring,” Pacquiao said at the party’s assembly over the weekend.

The news comes as no surprise to people in the Philippines, where the lines between celebrity and politics often blur.

Until this year, the boxer-turned-senator was supportive of Duterte, the populist president who is most known for a bloody war on drugs that has left thousands dead. Duterte is expected to run for vice president, in what analysts and critics say is a move meant to circumvent a single-term limit on the presidency.

But since June, the pair have clashed publicly, with Pacquiao criticising the President’s policies toward China and corruption. 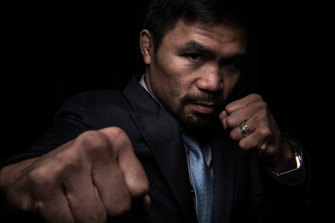 Until this year Manny Pacquiao had been a supporter of President Rodrigo Duterte.Credit:Wolter Peeters

Pacquiao chaired the PDP-Laban until he was unseated by Duterte’s allies in July.

Since taking office five years ago, Duterte has torn up the political playbook and has been widely condemned for his derogatory remarks against women and incitations to kill drug addicts and communists, among other outrageous statements.

Analysts expect Go to be a proxy for Duterte, who is bound by a single-term limit as president and must stay in power to avoid potential arrest by the International Criminal Court. The ICC announced last week it would proceed with an investigation of killings under Duterte’s term.

Pacquiao is the only eight-division world champion in boxing’s history and, in 2019, was listed by Forbes as one of the world’s highest paid athletes with earnings of around $26 million.

Pacquiao has continued his matches while juggling a career in politics – first as a congressman, and then a senator – resulting in criticism about his absenteeism.

In 2016, he came under fire and lost sponsorship from sportswear giant Nike when he called gay couples “worse than animals.”

Duterte’s daughter and Davao City mayor Sara Duterte-Carpio, who has led pre-election surveys, is also another contender for the presidency. Both Go and the younger Duterte denied they would seek the position – but nothing is final until the filing of candidacy closes in October.