EL PASO, Texas – A tense and chaotic scene erupted at the U.S.-Mexico border along the Rio Grande in El Paso as a large group of migrants crossed the border waving Venezuelan and Honduran flags and Border Patrol officers fired crowd-control projectiles.

The Border Patrol has been expelling Venezuelan migrants to Mexico since mid-October, and many have found themselves stuck in limbo in border cities. In Juárez, dozens have been sleeping on the south banks of the Rio Grande, hoping for a change in U.S. policy.

A video captured by the El Paso Times on Oct. 31 shows dozens of Border Patrol agents and support personnel forming a line along the border of the Chihuahuita neighborhood and the railroad tracks to push the migrant group back to Mexico. One migrant waves a large Venezuelan flag as he retreats into the low-running river and can be seen jabbing the flagpole toward agents. 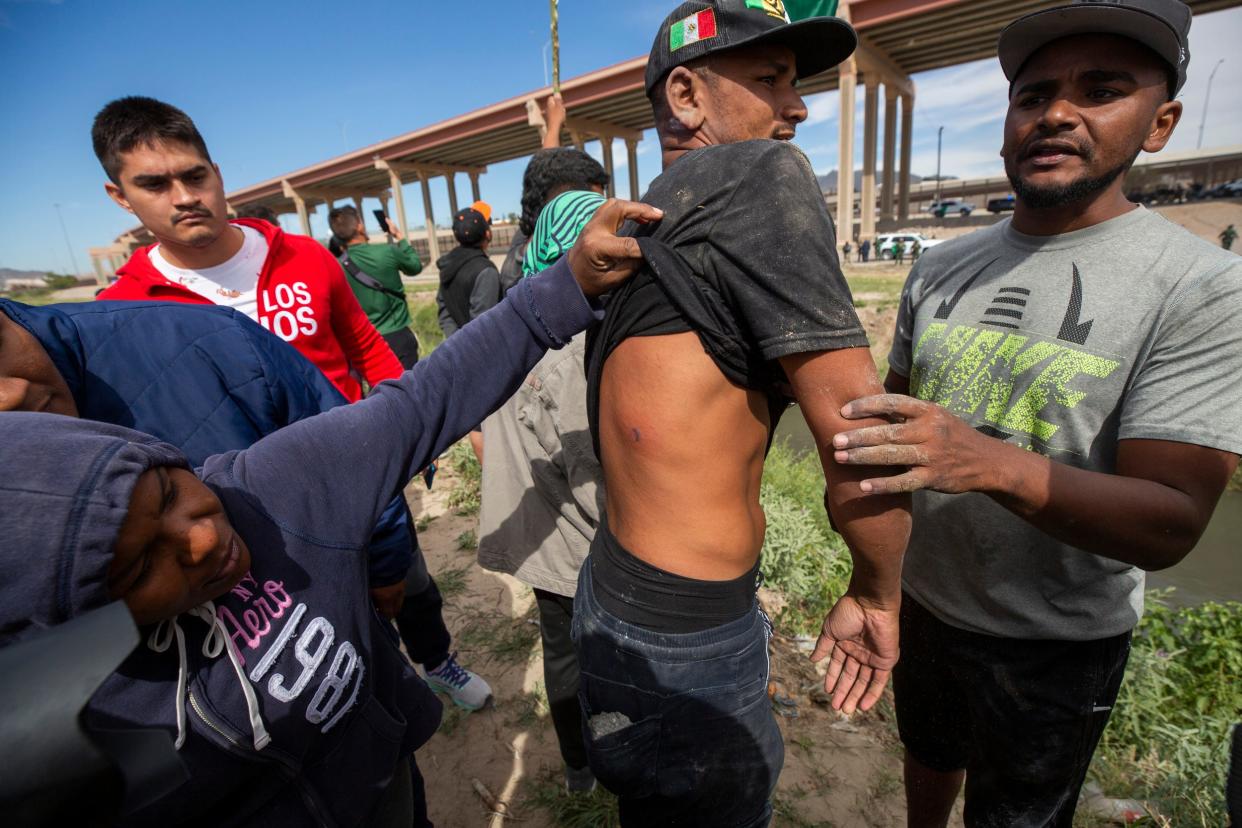 “One of the protesters assaulted an agent with a flag pole,” Hutchens said in an emailed statement. “A second subject threw a rock causing injury to an agent at which time agents responded by initiating crowd control measures.”

Use-of-force incidents by Border Patrol agents in crowd control have been rare in the urban footprint of El Paso, where the Rio Grande, canals and the 30-foot border fence discourage mass border crossing.

A group of migrants marched earlier Monday in Juárez, demanding an opportunity to cross the U.S. border.

They walked beneath an enormous cloth painted like a U.S. flag by U.S.-based artist Roberto Márquez but with the words “We the migrants built America” in the blue corner instead of stars. Several dozen migrants later crossed the U.S. border waving a Venezuelan flag before they were repelled into Mexico.

“We have a responsibility not only as migrants but as human beings to do something for our brothers,” Márquez said. “There has always been injustices, everywhere, along the border with the migrants. Now I think is the time for us to raise the voice to say what we need to say.”

Immigration pipeline: Political theater vs. daily survival: Inside the dire situation facing migrants bused across US

U.S. Rep. Veronica Escobar, a Democrat, said in a statement that she is “concerned about everyone’s safety and security in the area” and is staying in contact with the Border Patrol and the U.S. Consulate in Juárez.

On Oct. 12, the Biden administration announced a deal with the administration of Mexican President Andrés Manuel López Obrador in which Mexico agreed to take in Venezuelans expelled under the U.S. health authority of Title 42. In exchange, the U.S. promised 65,000 additional work visas for Mexican, Central American and Haitian migrants and agreed to process up to 24,000 Venezuelans into the country – by air, not at the U.S.-Mexico border.

Many Venezuelans are traveling without documents in Mexico and cannot qualify for the program.

Juan Acereto, U.S. liaison for the Juárez municipal government, said the Mexican border city is working with the federal government to provide migrants with refuge and work permits “so that they can access our labor market, and integrate into our community, if they so desire.”