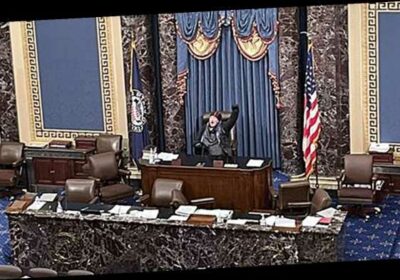 Federal investigators are looking into pro-Trump demonstrators who mobbed the U.S. Capitol on Wednesday in what some called a "coup attempt," but protester Josiah Colt, of Boise, said he just "got caught up in the moment."

An image of Colt climbing down from the Senate balcony, then sitting in the seat reserved for Vice President Mike Pence went global during the unhinged riots. He thought at the time the chair belonged to Speaker of the House Nancy Pelosi.

"I just got in the Capitol building," Colt said in a video posted to Instagram Wednesday. "I was the first one, I hopped down into the chamber and I was the first one to sit in Nancy Pelosi…she’s a traitor, she’s treasonous," he continued somewhat incoherently, cursing.

Acting Attorney General Jeffrey A. Rosen said that Capitol Police, FBI, ATF and the Metropolitan Police Department have been working to identify those who breached the Capitol, saying they would "face the full consequences of their actions under the law."

In another video posted to his Instagram before he disabled his social media accounts, Colt tried to explain.

"I'm in downtown D.C. I'm all over the news now. But, like, I'm just like every single one of those people that was marching. A peaceful protest. We're here to represent America," he said in an Instagram video. "Yeah, I did sit in Nancy Pelosi's seat."

According to a local news outlet, Colt is a small business owner who traveled to Washington to support the president. He said he, like the other rioters at the Capitol, was "tired of people stealing from us," which echoing Trump’s repeated claims that the election was "stolen."

Acting U.S. Attorney for District of Columbia Michael Sherwin told reporters Thursday that 40 cases had been charged through the Superior Court, the majority for "unlawful entry to certain areas of the Capitol grounds." Eight of the cases were related to firearm offenses, he explained.

An additional 15 federal cases were expected Thursday, again relating to the unauthorized entry of the Capitol and Capitol grounds.

"We're not going to keep anything out of our arsenal for potential charges," Sherwin said at a news conference. "We will bring the most maximum charges we can based upon the conduct."

It is unclear if Colt was charged with anything, but in an interview with Idaho News 2 on Thursday, he said he stopped other rioters from trying to "trash the place," allegedly telling them they were on "sacred ground."

"I love America, I love the people, I didn’t hurt anyone and I didn’t cause any damage in the Chamber, he told the news outlet, glossing over the part where he climbed down from the balcony. "I got caught up in the moment and when I saw the door to the Chamber open, I walked in, hopped down, and sat on the chair."

He apologized to the country and his home state.

"In the moment, I thought I was doing the right thing," he continued. "I realize now that my actions were inappropriate and I beg for forgiveness from America and my home state of Idaho."

Jake Gibson contributed to this report.