Boat ‘carrying 11 migrants’ is towed into Dover a week after Iranian woman became first to die in bid to reach UK – with 1,050 attempting dangerous crossing in space of a year

A boat believed to be carrying 11 migrants is being towed to Dover after it was stopped en route to Britain this morning.

It is the latest perilous crossing from migrants who are leaving France to travel to the UK on small boats.

So far this year, some 793 suspected migrants have been caught by British officials and since the start of November, more than 1,050 have crossed the busiest shipping lane in the world.

This morning the boat is being towed into the Kent town where the migrants will then be intercepted and questioned by Border Force officials.

Details about their ages, condition and nationality are not yet known. 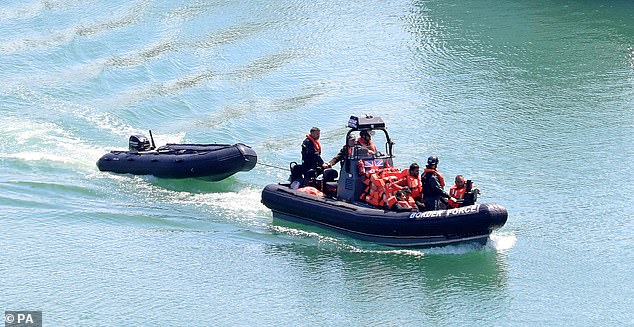 On August 9, a woman fell from a dinghy and is presumed dead when she and other migrants were in the boat around 20 miles off Ramsgate.

On the same day more than 60 migrants were rescued in the English Channel – including two people in kayak – as they made desperate attempts to reach the UK in five separate incidents.

They were saved on both sides of the channel as they tried to cross the 21 mile stretch of water to reach the UK.

The Iranian woman named by the Mail on Sunday as Mitra Mehrad, 31, is the first migrant who is thought to have died crossing the Channel.

Ms Mehrad, who was studying for a PhD in psychology, is missing presumed drowned after a boat carrying 20 migrants ran into difficulty in poor weather off the Kent coast earlier this month.

Ms Mehrad arrived in Dunkirk on Tuesday, August 6, and was registered at the Espace Jeune du Moulin, a gymnasium in the suburb of Grande-Synthe that has been converted into a sprawling migrant camp.