NEW YORK — In the first inning on Wednesday night in the Bronx, Vladimir Guerrero Jr. hit a home run.

Among the many aesthetic pleasures baseball promises every time two teams take to the diamond, that is among the purest — perhaps the game’s greatest single source of power production, with one of the most recognizable names on the back of his jersey and one of hottest on the front, launching a slider from New York Yankees ace Gerrit Cole to straightaway center in a matchup of the AL East’s most-established institution and the darling Toronto Blue Jays.

The trajectory itself contained some drama. The ball traveled 416 feet, enough to get over the wall in front of Yankee Stadium’s monument park, but not quite enough to escape the outstretched glove of Aaron Hicks. For a split second, the Yankees center fielder seemed to have robbed Guerrero, yet before he could close the glove, the ball was gone.

It was Guerrero’s second home run of the young season. Last year, he played an MVP-worthy campaign with an MLB-leading 48 home runs, but ended up finishing second to the only thing that could have bested such a performance: Shohei Ohtani’s historic two-way sensation. And the Blue Jays played postseason-worthy baseball, but ended up with 91 wins, one short of a wild-card berth.

In spring, Guerrero called 2021 the trailer. This year would be even better, the feature. Call it something like The Blue Jays’ Unfinished Business. Or Vlad and the Gang Go To October. The public has bought in, vaulting the Jays from lovable also-rans to popular preseason pick to win it all. 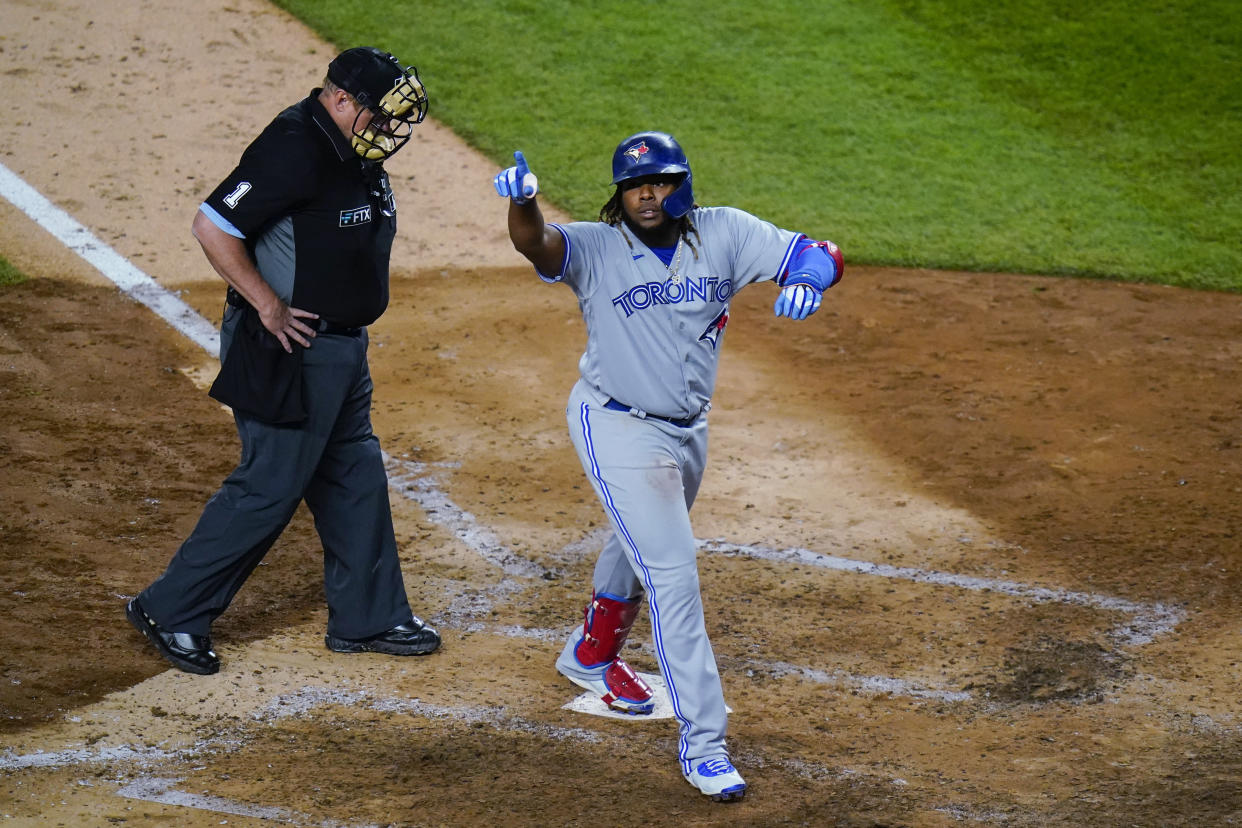 So anyway, after five games and one frame, Guerrero Jr. had two home runs. By the end of the night, he’d double that. But first, Toronto fans would watch their star’s season flash before their eyes.

Bottom of the second, Bo Bichette’s throw off a slick fielding play pulls Guerrero away from the bag. The first baseman’s right hand is on the dirt for a split second, just long enough for all 205 pounds of Hicks to come down on it, spikes first.

Vlad, impaled. The Blue Jays trainer and manager Charlie Montoyo meet him on the field.

“I already had in my mind that I wasn't going to come out of the game no matter what,” Guerrero said through an interpreter.

“I saw a lot of blood,” Montoyo said. And then he said it two more times.

“I told Charlie, ‘I'm not coming out of the game,’” Guerrero said.

So it was decided then. A little tape — that part hurt, the tightness on a wound that would later require two stitches — and back to a night that was just beginning.

Top of the third, and Guerroro is back at bat. The finger feels fine, well, fine enough to not have to favor it.

And then he proves it, emphatically. Turning on a 98-mph fastball too far inside to even call a good pitch. Guerrero puts it in the visiting bullpen 427 feet away from home plate. The seventh two-home run game of his young career.

Next time Guerrero faces Cole, all he gets is a double and a hat tip from the perennial Cy Young contender.

What does better look like? Guerrero back at the plate in the eighth inning, now facing Jonathan Loaisiga, still wearing blood-stained pants. The most successful batters, remember, fail more than twice as often as they succeed. And yet we can’t help but imagine heroics when the best step to the plate, when the moment all but demands it. That’s the tortuous trap of baseball, the way the game stops so you can consider the circumstances, the stakes, the storylines hanging in the balance, and how the unlikeliest outcome would be the coolest. Come on, he couldn’t, right?

And then there’s the additive beauty of baseball, how it sometimes delivers. A 23-year-old has the kind of game that will feature in the highlight reel when he is someday inducted into the Hall of Fame. On a 95-mph sinker, Guerrero hits his third home run of the game, this one 443 feet. The pathos of it all has made him only more powerful.

It’s the second three homer-game of his career. It’s also necessary to beat the Yankees, 6-4, and Guerrero especially loves to beat the Yankees, it’s something his Hall of Fame father Vlad Guerrero always stressed the importance of. Maybe it’ll be the one game that makes the difference at the end of the regular season. Can you imagine having that kind of game?

“Just add that one to my list,” Guerrero said later with a smile.