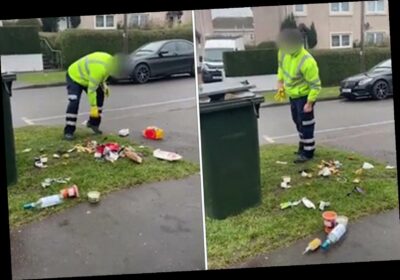 A BINMAN allegedly emptied a woman's rubbish in front of her house after she complained he had missed a collection.

Her dad claims the worker has a "vendetta" against his daughter as the pair have clashed for months. 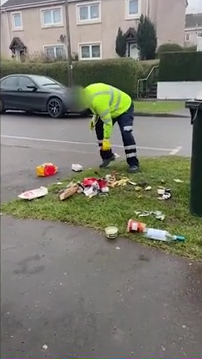 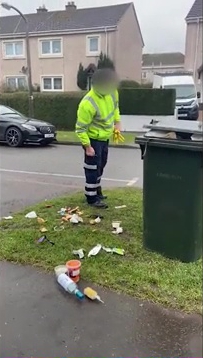 Video footage shows the binman picking up litter strewn across the grass on a residential street in Burdiehouse, Edinburgh.

The woman can be heard shouting at the man in high-vis about him missing a collection – which she describes as "an absolute joke".

She accuses him of tipping her bin out on the ground, saying: "I just watched you actually physically empty my whole bin on the floor."

She also says it is clear what he has done as a glass bottle on the floor was at the bottom of her bin.

The woman then tells the man she has recorded their entire conversation and he makes his way towards her.

He then appears to try to snatch her phone away as she shouts "get your hands off me".

The woman's dad has said his daughter now lives in fear following the incident.

He told EdinburghLive: "When [the binman] got there he started shouting and bawling. He tipped her bin out in the middle of the road.

"This was later on, and he showed up without the truck or anything.

"There's no way he could've known that glass bottle was in there without emptying it out.

"It was down at the bottom of the bin, so that can't be the reason [it wasn't emptied initially]. He seems to have a vendetta.

"My daughter is a nice lassie. She's well-liked, but she's been left pretty scared because of this. She's genuinely worried.

"One of her brothers has to go and stay with her the night before bins. It's that bad." 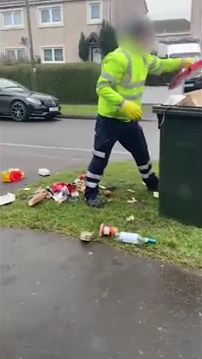 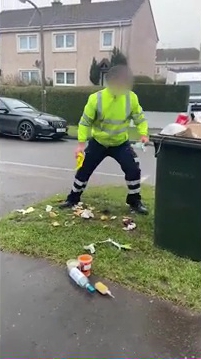 The man said his daughter "doesn't like the limelight" so wishes to remain anonymous, but she has put in a complaint to the council and they have reportedly moved him to another run.

He added: "I want the council to stand up and take notice of what has happened here."

The woman has allegedly had a problem with the binman for 18 months – mostly about her bins not being emptied.

Her father sad: "She's put in constant complaints. On the day this happened her bin was missed again and she went on to the web to complain.

"They were then told over radio to go back and get it."

Edinburgh Council has said it is aware of the incident, which happened on March 4, and is investigating.

A council spokesperson told The Sun Online: "We’re aware of the complaint and the footage and we’ve been in touch with the resident directly.

"As this relates to an ongoing investigation, it wouldn’t be appropriate to comment further."