The 47-year-old, who has worked for the not-for-profit that provides jobs to Australia’s disadvantaged since it was founded in 1996, said not seeing his customers and fellow vendors since July had been difficult. 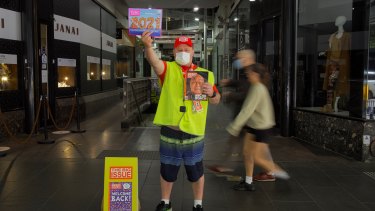 He struggled listening to sceptics talk about whether COVID-19 was real and worried whether locked-down Melburnians would ever be let out of their houses again.

“Being shut in for 111 days wasn't easy,” said Michael, who grew up in homes and orphanages.

Michael, who wanted to keep his last name private, said exercise, watching less television and receiving help from a friend lifted his spirits.

He also tried to keep his sorrows in perspective.

And he doesn’t have to wait any longer, with Big Issue vendors, who have all been COVID-trained, donning their fluoro vests and heading back out onto the streets on Friday.

Vendors purchase magazines for $4.50 and sell them for $9, allowing them to earn an income.

Big Issue chief executive Stephen Persson said it was incredibly hard having to tell the vendors they couldn’t work during the shutdown.

“It's the first time in 24 years where we’ve not been able to provide marginalised, homeless people with the opportunity to work their way out of their circumstances,” he said.

“To take that opportunity away was one of the most challenging things I've ever had to do.”

Mr Persson said the organisation raised money for a hardship fund to help vendors and provided them with ongoing support.

But nevertheless, the organisation was concerned about vendors' welfare.

Mr Persson said he was relieved when he heard they could go back to work.

“It was just wonderful and the excitement has been overwhelming,” he said.

Michael, who sells the magazine outside Prahran market or near the Centreway Arcade in Melbourne's CBD, said he couldn’t wait to see his customers again, especially one named Bill.

“He’s a friendly guy, he’s always smiling. He always comes up to me and shakes my hand,” he said.