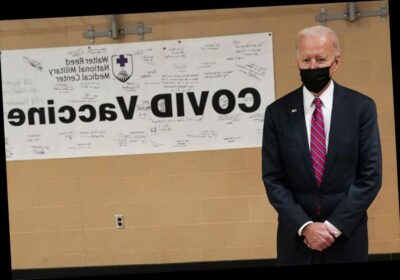 Why is Biden looking to give free vaccines to other nations before US reaches herd immunity?

Two straight weeks of good news: COVID-19 cases are declining, hospitalizations are likewise down and the daily pace of vaccinations is on the rise nationwide. What’s not to celebrate? Plenty, sadly.

The nation’s leading infectious-disease experts are warning that the situation is dire, because new, more dangerous strains of the novel coronavirus threaten the success of the US vaccination ­effort. They caution that we’re in a race to vaccinate the American population before the virus becomes vaccine-resistant.

Message to the Biden administration: The public doesn’t want to see any more presidential news conferences announcing climate day, racial-equity day, immigration-reform day or any other boutique-left themes. Every day needs to be vaccination day. Urgency needs to be translated into action.

A variant dubbed B.1.1.7 ­appeared in Britain in September. It’s at least 50 percent more contagious than original strain, and it forced much of the UK into fresh lockdowns. The US Centers for Disease Control and Prevention predict it will be the dominant strain here by March.

A new strain from South Africa blasts right through the antibody drugs used to treat former President Donald Trump and may also resist some vaccines. An especially lethal Brazilian strain is producing carnage in the Amazon ­region, even causing serious illness in young people.

The threat from these new strains “changes everything,” warns Peter Hotez, of Baylor College of Medicine, including the vaccine timetable.

Biden’s goal for finishing vaccination is the end of summer, but that’s too late, says Hotez: “We’re going to have to figure out a way to vaccinate the American people by late spring. That’s a tall order.”

Hotez admits that “to get there, we need a rate of immunization two or three times higher” than Biden’s plan. Most experts agree. Jennifer Nuzzo of Johns Hopkins says “we are in a race against time.” Ashish Jha from Brown University insists “there is zero justification for not vaccinating around the clock. We are in a race against the variants.”

Mexican farm workers cross the border, decline to be tested and spread the infection along the border towns, The New York Times reports. Yuma County, Ariz., where migrants harvest lettuce, has the highest infection rate in the United States.

Biden has put tight restrictions on international air travel, while halting the Remain in Mexico program and border-wall construction. Air travelers must test negative before embarking, quarantine on arrival and test negative again. But what’s the point, if people from dozens of countries walk through Mexico and enter with none of those restrictions?

As for getting vaccine shots into people’s arms, Biden has ­instructed the Federal Emergency Management Agency to help 11 states so far set up and operate vaccination sites. He needs to ­expand this effort.

Recently, Pfizer failed to deliver doses as promised, slowing the pace of vaccinations in many places, including New York City. A shortage of raw materials was partly to blame. That’s a lesson for the future. America needs a medical supply chain with active ingredients made in the homeland.

The US is also pitifully behind in identifying germ threats before they become widespread. Many countries routinely sample positive COVID tests for unusual ­mutations. The UK samples 10 percent of its tests. The US shockingly samples less than 1 percent, less than any other developed country.

The experts warn that Biden has a half-year window to vaccinate and conquer the pandemic. Our return to normal life depends on it. Yet instead of focusing on this one urgent mission, as he promised before he was elected, Biden is rolling out the left’s wish list. Our lives be damned.

Betsy McCaughey is a former lieutenant governor of New York and author of “The Next Pandemic.”