Ben Stiller meets with Zelenskyy in Kyiv, tells Ukrainian leader 'You're my hero'

The comedy star praised the Ukrainian president — himself a former comedian and actor — as a hero during the meeting, telling him: “You’re amazing.”

Stiller visited Zelenskyy in his role as an ambassador for the United Nations refugee agency. It comes as Russia’s invasion of Ukraine continues to force millions of people to flee the war-torn country, exacerbating a growing global crisis that has seen the number of displaced people pass 100 million for the first time on record.

“It’s a great honor for me,” Stiller, who was appointed a UNHCR goodwill ambassador in July 2018, said in video capturing the meeting. “It’s really wonderful, you’re my hero. You’re amazing,” he said.

“We know you very well,” Zelenskyy said of the “Zoolander” star.

The pair found common ground in their shared roots in the entertainment industry, with Zelenskyy having previously played a Ukrainian president in a popular television show before his real-life landslide election victory in 2019. 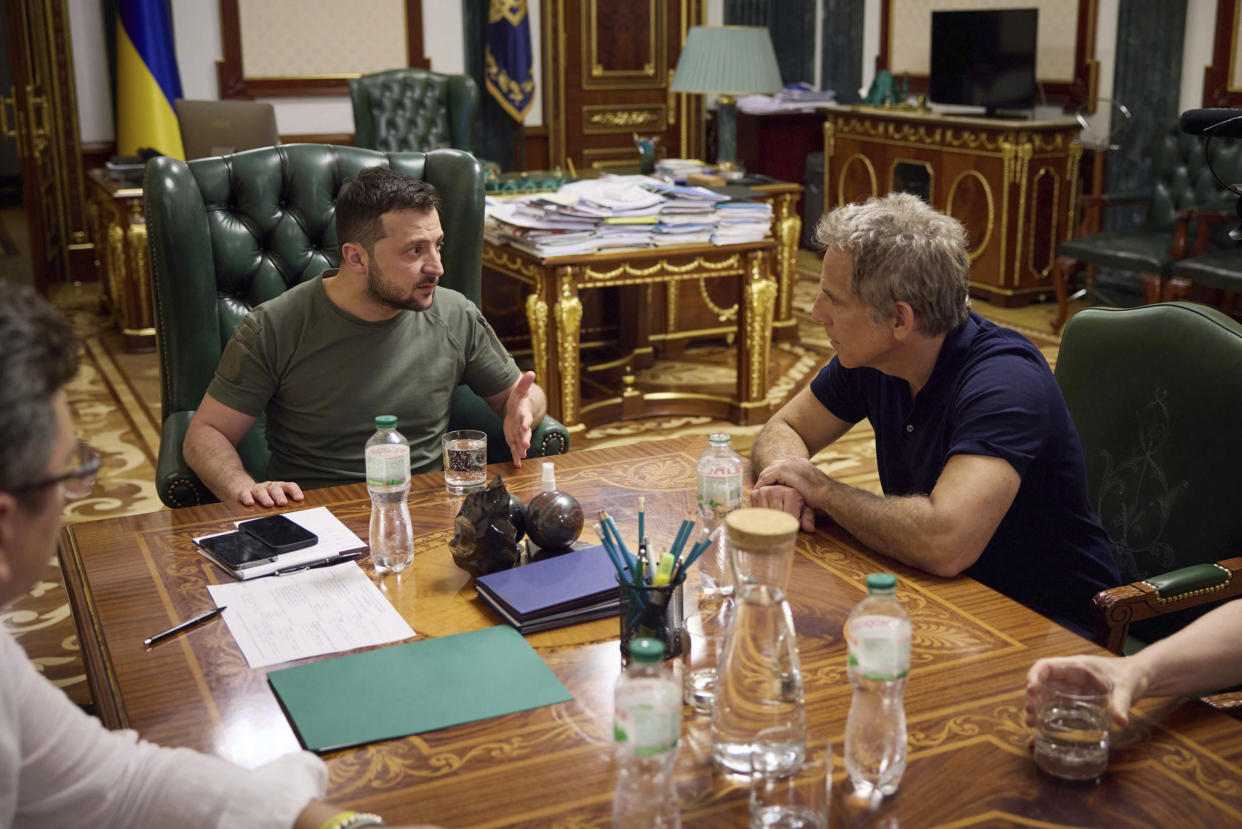 “You quit a great acting career for this,” Stiller told Zelenskyy, praising the president for his leadership in the war.

“Not so great as you,” the Ukrainian leader quipped.

“No, but pretty great,” Stiller responded. “But what you’ve done and the way that you’ve rallied the country and for the world, it’s really inspiring,” he said.

Sitting down with Stiller, the Ukrainian leader said that while it might not be “interesting to speak about the war each, you know, every day,” he said that “for us, it’s very important.”

Putting pressure on Moscow to end the war, which was launched nearly four months ago now, is “very difficult” when “people forget to speak about it,” Zelenskyy said, before thanking Stiller for bringing fresh attention to the conflict.

Moved by what he saw during his trip to Ukraine, Stiller said: “I think it’s hard to understand what’s actually going on here if you haven’t been here.”

“Just the actual impact of coming here,” he said. “The level of destruction … You see it on TV, you see it on social media. It’s something else to actually see it and feel it.”

Stiller was joined by UNHCR Representative in Ukraine Karolina Lindholm Billing. They visited Zelenskyy’s office after seeing the region around Kyiv, including ruined residential areas of Irpin, where they spoke with people who survived occupation by Russian forces, a news release from Zelenskyy’s office said.

The actor also met with the new U.S. ambassador to Ukraine, Bridget Brink, who said in a tweet that Stiller’s visit had brought “much-needed attention to humanitarian needs during the largest and fastest humanitarian crisis in recent memory.”

A number of politicians and celebrities from around the world have visited Ukraine in the midst of Russia’s invasion, with actor Angelina Jolie visiting Lviv in April to meet with children affected by the war.

More than 12 million people have fled their homes since Russia launched its invasion, according to the United Nations. More than 5 million have sought refuge in countries across Europe, while more than 7 million are believed to have been displaced within the country.