Baroness Boothroyd is selling box given to her by Boris Yeltsin 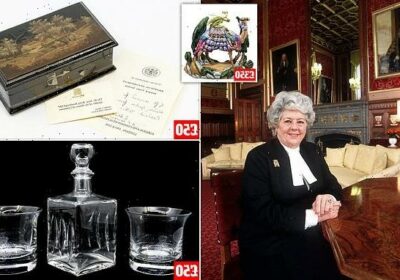 Betty’s boot sale! Baroness Boothroyd is selling ornamental box given to her by Boris Yeltsin among 40 gifts from her eight years as speaker after downsizing to smaller country cottage

Baroness Betty Boothroyd is selling a haul of gifts she received during her impressive political career – because they won’t fit inside her new country cottage.

The 91-year-old former MP, who is the only woman to have been elected Speaker of the Commons, is auctioning off around 40 decorative items she was presented with throughout her career.

The treasures include a gift box given to her by the late Russian president Boris Yeltsin, two Victorian crystal chandeliers and a decanter from the Royal Navy.

A limited-edition ceramic figure of Lawrence of Arabia riding on a camel, which is one of only six made, will also go under the hammer to fetch an estimated £350.

Baroness Boothroyd is parting with the gifts after downsizing from her London home to a small cottage in South Cambridgeshire, which she says is too small to accommodate them. 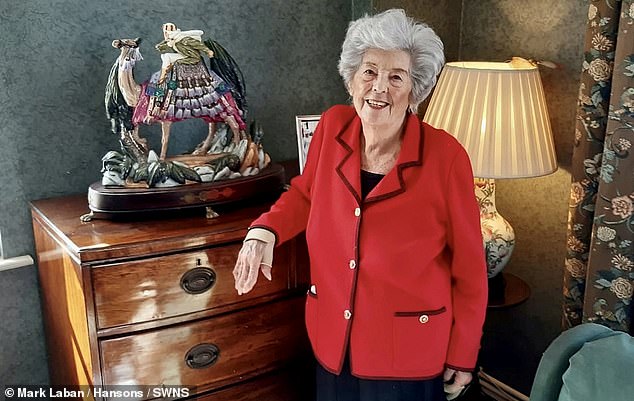 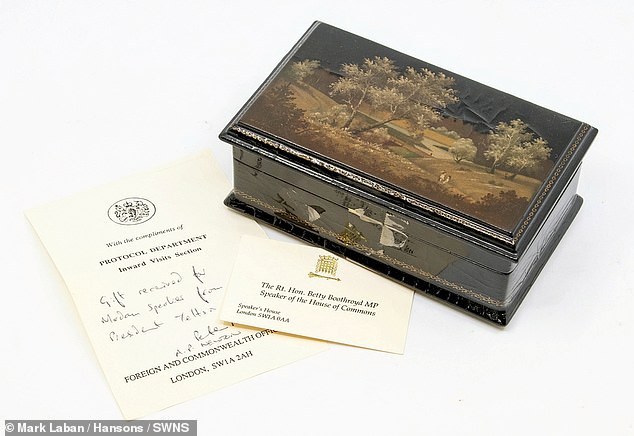 She said: ‘I’ve just got to get on with it. I’ve cherished every single thing but I have to let go.

‘I have loved everything. They’re a reminder of a colourful life. But I am downsizing.

‘It’s an awful thing but that’s the way it is, and there’s no alternative.

What are the items expected to fetch at auction?

The ornamental box given to Baroness Boothroyd by Boris Yeltsin is expected to fetch between £30 and £50.

A pewter beer jug engraved with the inscription ‘All Party Parliamentary Beer Group’ is set to fetch between £40 and £60.

The Lawrence of Arabia figure is the most expensive item in the sale and is expected to fetch between £250 and £350.

The St Petersburg Navy decanter and tumblers are expected to fetch between £30 and £50.

Two Victorian chandeliers are expected to sell for between £100 and £200.

A necklace worn by Baroness Boothroyd during her time as House of Commons Speaker is expected to fetch between £50 and £100.

The cheapest item are a pair of green and white table lamps which have an estimated price of between £5 and £10.

‘I am moving to a country cottage in South Cambridgeshire.

‘It’s a lovely old place with beams but it hasn’t got the deep windowsills or space I would need to display all the items I have in London.

‘It’s taken me a long time to go through everything.

‘I am parting with lovely things I’ve collected over the years, or which were given to me as gifts during my public life.

‘These little mementos, some bought during my travels to colourful countries like Cuba, mean so much. They’re my life story.’

One of the prized items which is expected to fetch thousands is an ornamental box given to her by Boris Yeltsin, the first President of Russia.

Baroness Boothroyd said: ‘I entertained President Yeltsin during a trip to London.

‘He kissed my hand and gratefully presented me with the little box, which has a note inside from him.

‘Another object I absolutely love is a large, limited-edition ceramic figure of Lawrence of Arabia riding on a camel. It’s one of only six.

‘It was given to me when I was president of the All-Party Defence Group.

‘When I left, they couldn’t decide whether to give me something relating to the Army, Navy or Airforce so came up with Lawrence.’

Other items set to go under the hammer include Baroness Boothroyd’s mirror from her dressing room which includes a photo of her, costume jewellery, two pairs of Victorian crystal chandeliers and a ship’s flat-bottomed decanter and glasses presented to her by the British Navy in St Petersburg, Russia.

She said: ‘I’m very sorry to have to part with them.

‘The mirror is beautiful and has a distressed frame and the decanter and its matching glasses are lovely.

‘As for the costume jewellery, I’m someone who likes to wear something different every day and have a little something to match to my outfits.’

The Baroness Betty Boothroyd Collection will be sold at Hansons London, Teddington, on April 26. 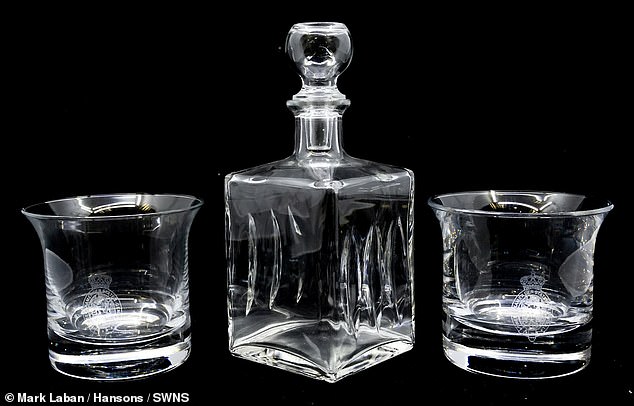 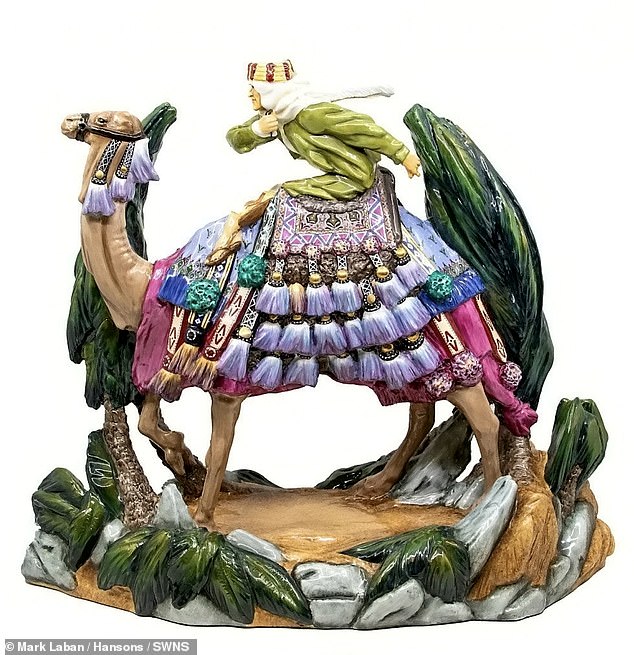 A limited-edition ceramic figure of Lawrence of Arabia riding on a camel, which is one of only six ever made, will also go under the hammer

‘This is an extraordinary opportunity to buy something owned by one of the most impressive women British politics has ever known.

‘She brought order to the House of Commons. Now she’s decided it’s time to bring more order to her life by downsizing.

‘For anyone who’s admired her down-to-earth demeaner, remarkable achievements and ability to rise to the top in the male-dominated world of British politics, here’s a unique chance to own a part of her life story.

‘She’s mixed with the great and the good including royalty and major political leaders like South Africa’s Nelson Mandela and former American president Bill Clinton. 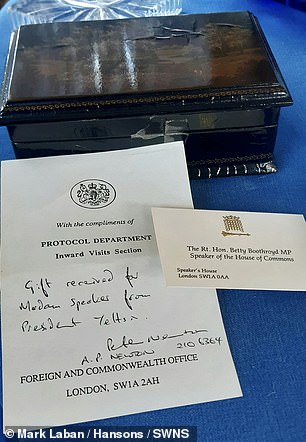 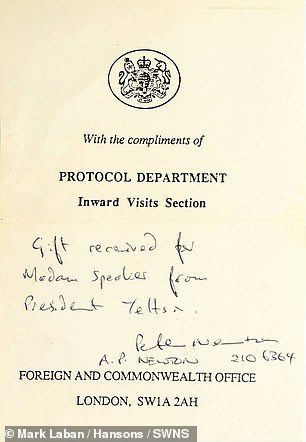 The ornamental box, given to the Baroness by Yeltsin, is expected to fetch between £30 and £50 at auction 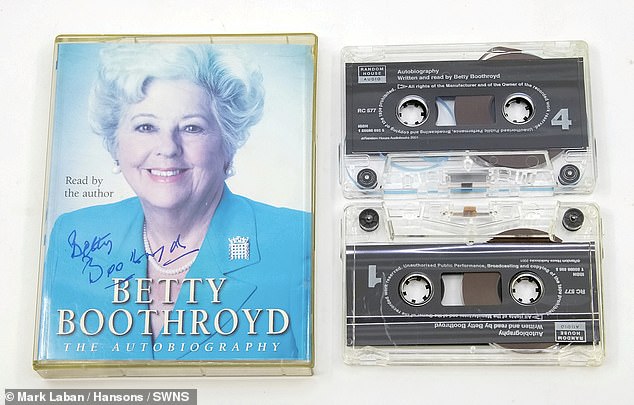 ‘She’s also received an Order of Merit, a rare honour given at the Queen’s discretion.

‘The Baroness puts her success down to being an only child who had to fight her own battles and just get on with it.

‘That may be the case but her inner strength is extra special.

‘She said lockdown hadn’t bothered her at all as she was used to isolation and had lived through so much.’

The only woman to serve as Speaker of the House of Commons: Who is Baroness Betty Boothroyd?

Baroness Boothroyd was born in Dewsbury, Yorkshire, in 1929, the only child of Ben Archibald Boothroyd and wife Mary, both textile workers.

She was educated at council schools and went on to study at Dewsbury College of Commerce and Art.

From 1946 to 1952, she worked as a dancer and performed at the London Palladium.

However, a foot infection, brought an end to her dancing career, and she entered politics. 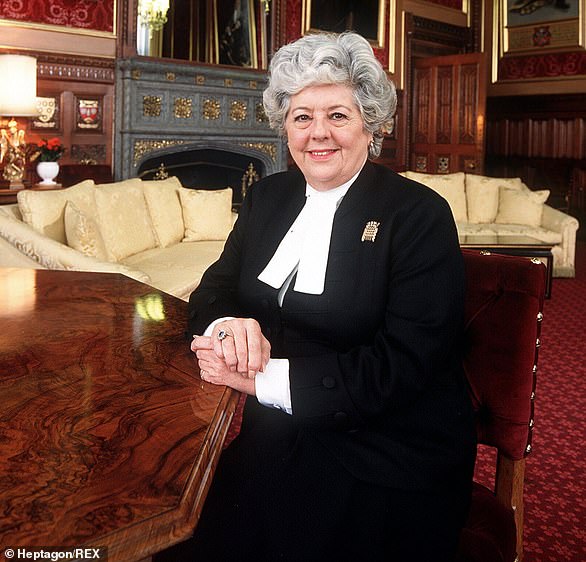 Baroness Boothroyd (above in 1993) was born in Dewsbury, Yorkshire, in 1929, the only child of Ben Archibald Boothroyd and wife Mary, both textile workers

Running for the Labour Party, Baroness Boothroyd contested several seats before being elected MP for West Bromwich in 1973.

In 1992, she was elected Speaker of the House of Commons, the first woman ever to hold the position in 700 years.

She has received numerous awards and accolades but is most proud of her Order of Merit, an honour bestowed as a personal gift by the Queen.