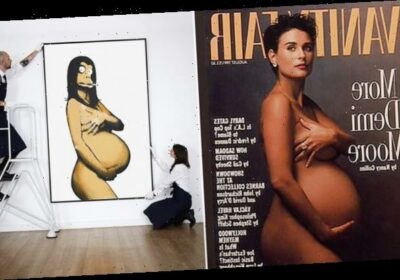 The 7ft-tall canvas, unveiled in the British graffiti artist’s debut US exhibition in 2006, features a naked and heavily pregnant figure clutching her belly but wearing an ape mask and smoking a cigarette.

In a poster set against the backdrop of the Hollywood sign, the parody was used to advertise the exhibition, which attracted 30,000 visitors including Brad Pitt, Angelina Jolie, Keanu Reeves and Cameron Diaz.

Moore, then 28, sparked controversy while pregnant with her second child when she bared her baby bump by posing naked for a photoshoot with Annie Leibovitz in 1991.

The cover has had a long cultural impact in the US, and helped to make pregnancy photos fashionable. It has been parodied on several occasions, including for the 1994 comedy film Naked Gun 33⅓: The Final Insult. 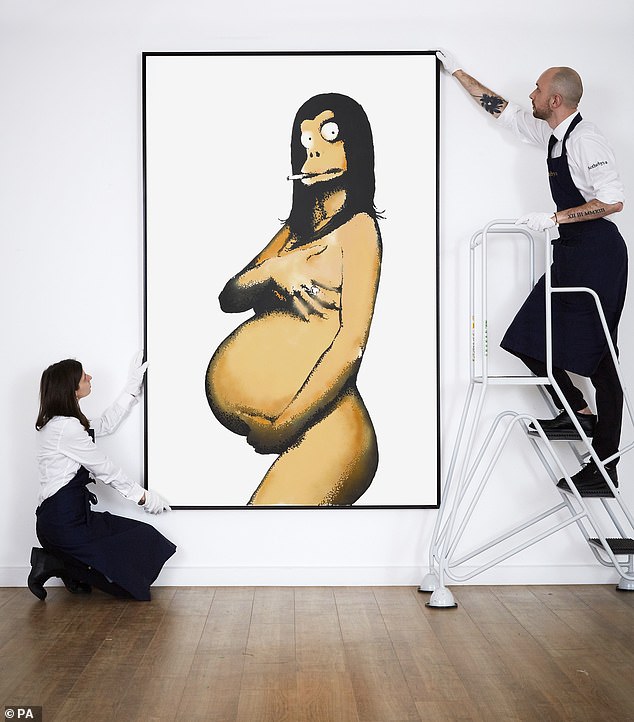 Banksy’s parody of Hollywood star Demi Moore’s famous Vanity Fair magazine cover could fetch £3million at auction. The two-metre-tall canvas, unveiled in the graffiti artist’s debut US exhibition in 2006, features a naked and heavily pregnant figure clutching her belly but wearing the mask associated with Banksy and smoking 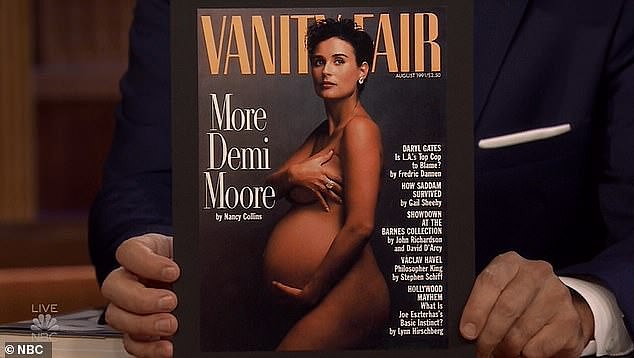 Moore, then 28, sparked controversy while pregnant with her second child when she bared her baby bump by posing naked for a photoshoot with Annie Leibovitz in 1991

Leibovitz sued over the Naked Gun parody, but the case was dismissed in 1996 because the parody relied ‘for its comic effect on the contrast between the original’.

Emma Baker, head of contemporary art evening sales at Sotheby’s London, said the painting ’embodies the tongue-in-cheek humour, the outrageousness of Banksy in that show. He’s poking fun at celebrity’.

And she added: ‘It works on many levels, not just parody. You can almost see it as like a modern day fertility goddess, especially in a fine art context.

‘Images of pregnant female embodiment aren’t very common across the history of art. This is coming at it from a very different angle and it’s very outrageous, but at the same time it’s a painting and it’s a work of fine art.’

She added: ‘The monkey mask is totally synonymous with Banksy, that’s his proxy as a disguise … Any photoshoot where Banksy has to represent himself, you see him wearing this monkey mask.’

The exhibition featured a real-life Indian elephant, with a statement: ‘There’s an elephant in the room… Every day hundreds of people are made to feel physically sick by morons at art shows telling them how bad the world is but never actually doing something about it. Anybody want a free glass of wine?’ 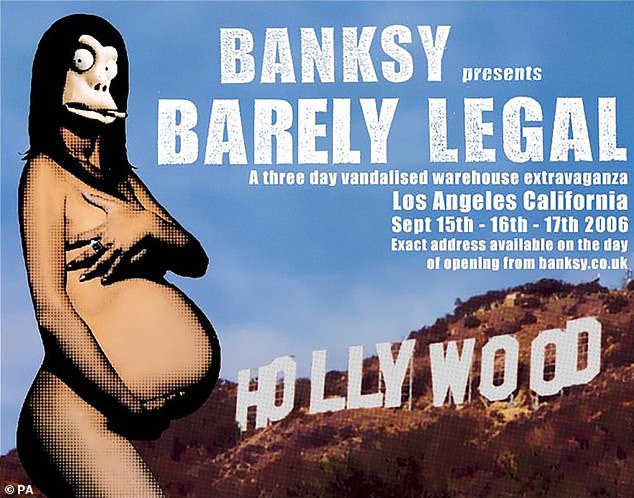 In a poster set against the backdrop of the Hollywood sign, the Danger Monkey Pregnant spoof was used to advertise the exhibition, which attracted 30,000 visitors including Brad Pitt, Angelina Jolie, Keanu Reeves and Cameron Diaz

The canvas is being sold by a private owner and will be going to auction for the first time.

Original Concept for Barely Legal Poster (After Demi Moore) will be offered at auction in London on March 25 as part of Modern Renaissance: A Cross-Category Sale.

In October 2019 , Banksy’s oil on canvas painting depicting the House of Commons populated by chimpanzees sold for a record £9.9million.

Originally titled Question Time, the work was first purchased by a private collector in 2012 before resurfacing in 2019. Upon its return Banksy commented: ‘Laugh now, but one day no-one will be in charge’.

His 2005 version of Claude Monet’s Water Lillies – which depicted shopping trolleys and street cones against one of the impressionist painter’s iconic backdrops – sold for £7.5million at auction last October.

Banksy’s stunts, from shredding his own masterpiece to setting up a museum exhibition without curators knowing

Last year, the renowned street artist boarded a Hammersmith and City Line train dressed in a high-vis jacket, boiler suit, goggles and face mask on July 10, spray painting rats in pandemic-inspired poses inside the carriage and on a platform’s wall.

It was removed by clueless Transport for London cleaning crews, who were unaware of its origins despite the Bristol-based artist sharing a video of the artwork on his Instagram page.

The RMT union raised security concerns three months after the stunt, while TfL has revealed it would not publish the findings of an investigation into how Banksy was able to pull it off. 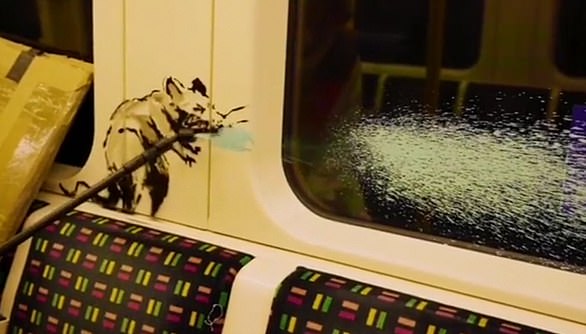 Banksy’s artwork on the London Underground was valued at around £7.5million – but clueless cleaners removed it from the Hammersmith and City Line train before it could be preserved

In 2018, Banksy’s iconic painting Girl With Balloon dramatically self-destructed moments after the gavel fell for more than a million at a Sotheby’s auction.

The audience watched on dumbstruck as the £1,042,000 painting was destroyed by a hidden shredder.

Banksy later revealed how he created the shredder in a video posted on Instagram.

The man who is believed to be the person who shot the video that Banksy uploaded bears a strong resemblance to Robin Gunningham who has previously been named as the elusive artist. 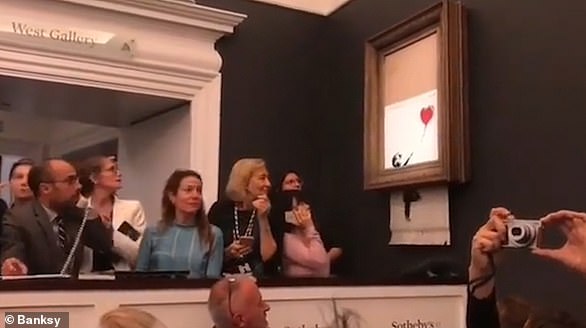 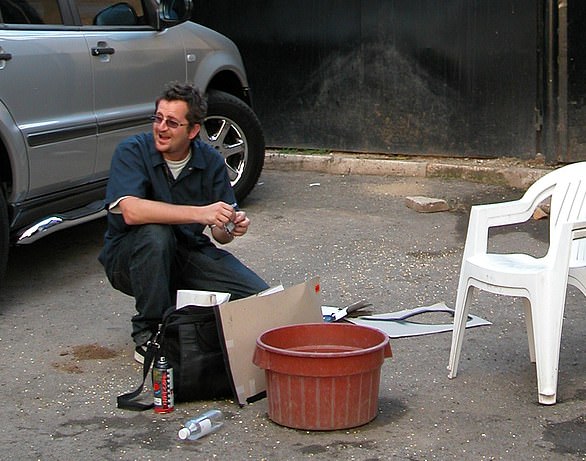 Robin Gunningham was named as street artist Banksy, which he claimed was untrue

Setting up his own museum exhibition

In 2009, Banksy stunned Bristolians by setting up his largest ever museum exhibition in complete secrecy.

The covert graffiti artist snuck into Bristol’s City Museum and Art Gallery and replaced many of the artefacts on display there with 100 pieces of his own work, including a burnt-out ice-cream van.

The spray-painted van, which sits under a giant melted cone, appears alongside dozens of sculptures, oil paintings and his trademark stencils 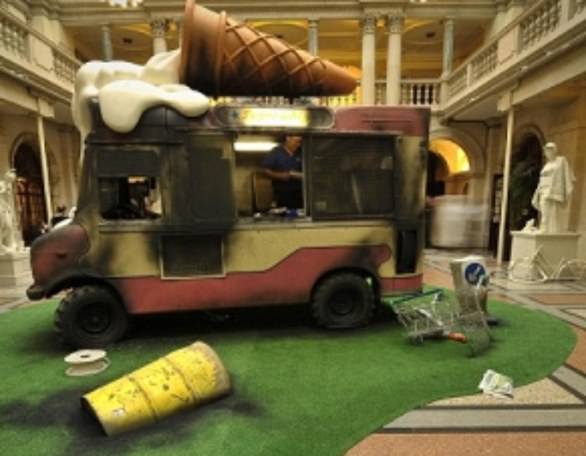 In 2009, Banksy snuck into Bristol’s City Museum to set up his own exhibition