The phone calls from loyal customers started before Premier Daniel Andrews had even left the podium on Monday afternoon.

A "flurry", said Tiamo restaurant proprietor Fab Succi, "like everyone was almost in panic mode".

"There's this sense of urgency with people trying to get back to normality and, you know what, I think they deserve it," he said. 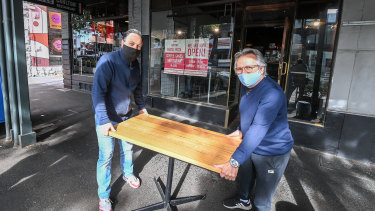 Tiamo’s Fab Succi (left) and manager Giulio Damante setting up a table outside their restaurant for the first time in months.Credit:Justin McManus

The Lygon Street food strip in Carlton was buzzing on Tuesday morning with the news restaurants and cafes could resume taking customers from 11.59pm.

Capacity is limited to 20 people inside and a maximum of 50 outdoors, with strict social distancing protocols.

But Mr Succi has had to tell callers hankering for their first sit-down meal in months that his restaurant would not be reopening until Thursday.

"It will be crazy, but that's what it should be."

A a few doors down, Salvatore Cultrera said his restaurant, Cafe Notturno, would begin serving customers from 6am on Wednesday.

"We watched [the press conference], then it was bang, on the phones: talking to managers, organising rosters, getting people ready," Mr Cultrera said. 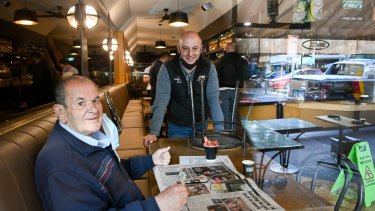 Lygon Street shops and restaurants prepare to open after lockdown.Cafe Notturno owner Salvatore Cultrera (standing) with his uncle Bruno Cultrera are opening to dine-in customers from 6am on Wednesday.Credit:Justin McManus

"I rang most of my major suppliers. It was just scrambling on the phones."

Cafe Notturno has been open for takeaway throughout the second wave, but Mr Cultrera said getting people back into seats was "massive" for the business.

"Though, even then it's tough because we're still very limited," he said. "We'll rely on turnover [of customers] and I think people are pretty good about that. They understand."

Mr Cultrera said the biggest challenge was getting back staff at such short notice. Five workers, including himself, have been kept on JobKeeper, but some casuals, mostly students and international travellers, have been lost. 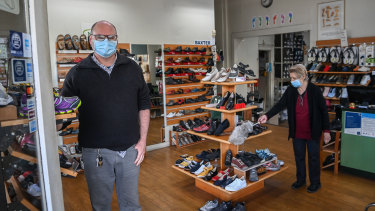 Joe and Norma Watt of Watt’s Shoe Store on Lygon Street preparing to open from Wednesday. The business has been in the family for four generations. Credit:Justin McManus

Retailers like Watt's Shoe Store, a family business for four generations, can also reopen from Wednesday.

Joe Watt and his mother Norma were in their Lygon Street store Tuesday morning, dusting off shoes and sweeping away the accumulated pollen that had crept in from beneath the doors during the store's 15-week customer hiatus.

Mr Watt was able to keep the repair workshop open and moved whatever he could of the business to online, "but that's not enough to be able to survive," he said.

"We probably knew [reopening] was going to happen because of the numbers and now we just have to suddenly get going. It's a case of changing the mindset."