Living out of a backpack: Orphaned wallaby is brought up in zoo keeper’s rucksack after his mother died

An orphaned baby wallaby is being hand-reared in a rucksack after it was left without a pouch to live in when its mother died.

Riley the wallaby was born four months ago at Studley Grange Butterfly World and Farm Park near Swindon.

But when his mother died of pneumonia two weeks ago the baby creature was left with nowhere to live.

Wildlife carer Julia Stewart stepped up to look after him and decided to keep him in a furry rucksack so he would feel at home.

Wallabies keep their young in their pouches for around six months after they are born.

The mother-of-three, who has three grown-up children, says looking after Riley is like ‘being pregnant again’. 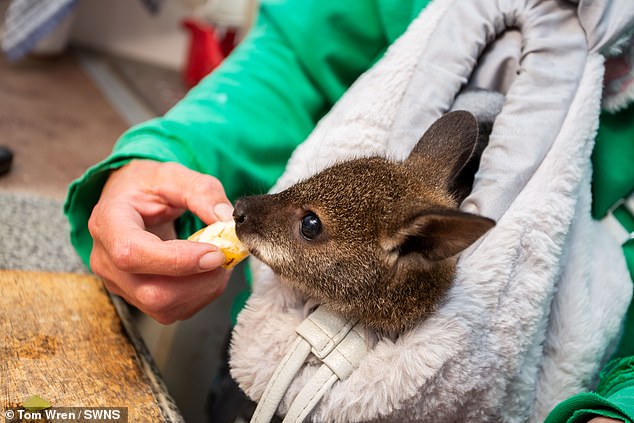 Julia Stewart carries him in the furry rucksack strapped to her chest from 6.30am to 10.30pm every day – and then he sleeps on her bed

She carries him in the furry rucksack strapped to her chest from 6.30am to 10.30pm every day and then he sleeps on her bed.

Riley is allowed out of the pouch for an hour and a half a day to hop around with other wallabies at the animal centre.

The mother-of-three, who has three grown-up children, says looking after Riley is like ‘being pregnant again

He sleeps in the rucksack dangling from the headboard of her bed and even has a special spot in the passenger seat of her car.

The young wallaby is fed every four hours and enjoys a diet of lactose-free milk, fruit, veg, a bit of grass and alfalfa, a nutritional plant.

Mrs Stewart said: ‘Riley’s mum passed away so we created the pouch to care for him.

‘He had been cold all night and didn’t have any milk so we put him in a furry kids’ rucksack.

‘He is strapped to me every day – and even sleeps in the pouch hanging from the headboard of my bed at home.

‘I have to feed the chickens, parrots and dogs I keep at home and then take the dogs for a walk – Riley is with me in the pouch the whole time.

‘In the car he hangs on the back of my headrest with a seat belt across him – and likes sticking his head out of the window to have a look around.

‘At the centre, I care for a lot of animals so I have to keep him away from the otters, meerkats and raccoons.

‘But when I’m with wallabies I let him hop around the pen so he knows he is a wallaby. He also has a play in the morning in the front garden of my home.’ 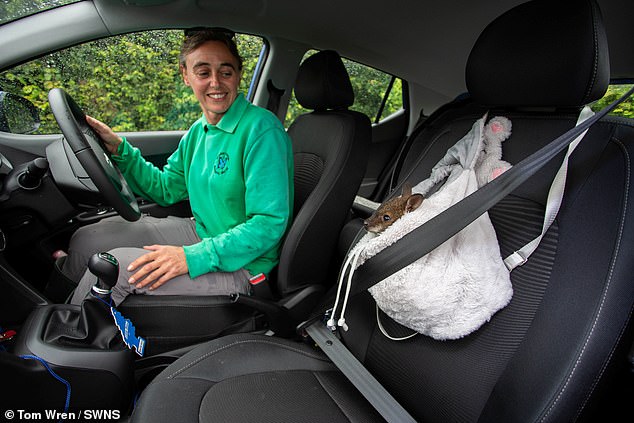 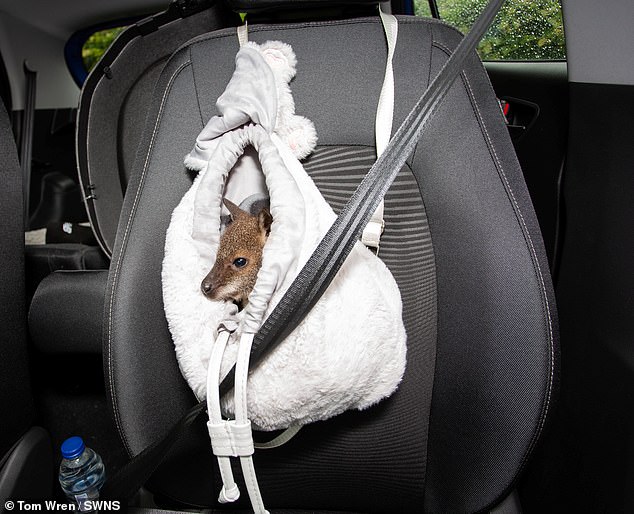 Mrs Stewart says Riley gets on well with her pet dogs who are very protective over him.

She added: ‘My dogs love Riley too. My collie washes him and protects him – she worries if he goes out of sight.

‘My Labrador watches him because he wants to play but I’ve told him Riley is too small to play.

‘I’ll keep him in the pouch for at least three months because he is still very small and then we will integrate him with the six other wallabies at the centre – two of these are his siblings.

‘I have grown attached to Riley because my three kids, who are aged between 18 and 25, are all grown up now. It’s like being pregnant all over again.’

Studley Grange Butterfly World and Farm Park has a butterfly house and zoo area an is also home to a  giant tortoise, meerkats, otters and a raccoon. 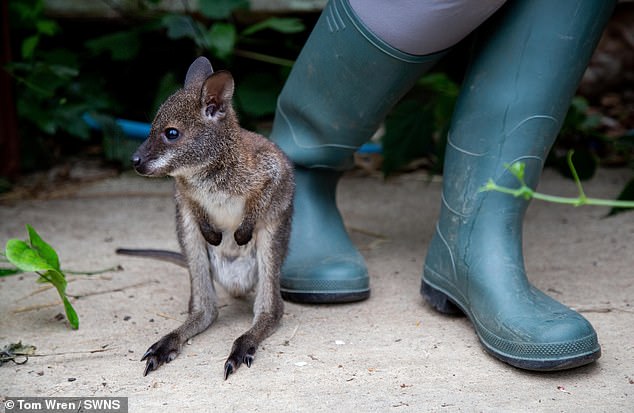