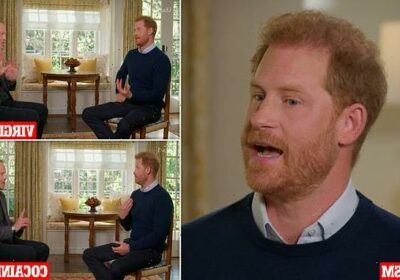 ‘This is awkward and uncomfortable’: Royal fans react to Prince Harry’s bombshell Tom Bradby interview as viewers claim Duke is ‘defensive and angry’ at questions about racism, Camilla and drug use

The interview – which included more explosive revelations –  came ahead of the release of his autobiography which hits shelves on Tuesday but was accidentally leaked in Spain.

Despite sitting down with ‘pal’ Tom Bradby, who has known Harry for more than 20 years, viewers were quick to notice that the formidable journalist did not go easy on him, with some calling their exchange ‘awkward’.

Sitting down to speak about the relationship with his family, the conversation turned to his mother-in-law Queen Consort Camilla. 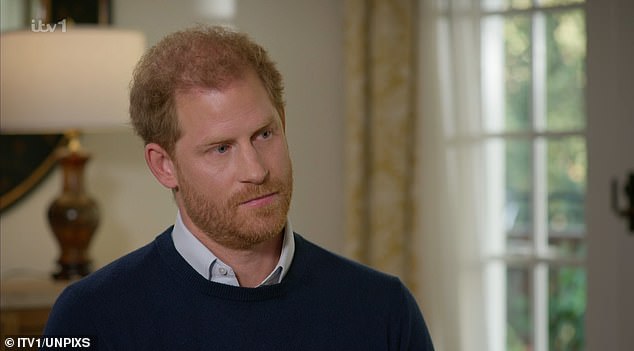 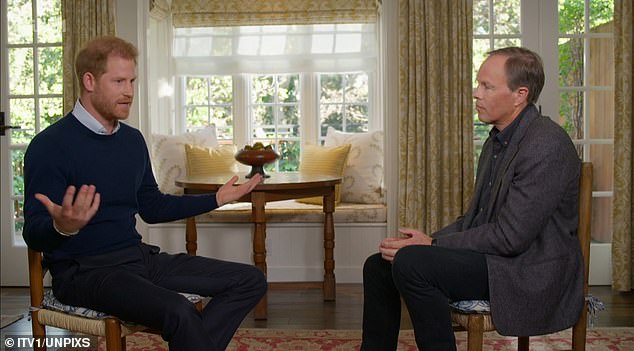 Prince Harry sat down for his first primetime interview to promote his memoir, Spare

Prince Harry sat down with US show CBS’s 60 minutes during which he launch a ferocious attack on his stepmother Camilla, branding her ‘the villain’ and ‘dangerous’, having ignored a plea from his father not to attack his wife.

The Duke of Sussex said the Queen Consort was content with bodies being ‘left in the street’ – including his – as she tried to rehabilitate her image because of her long affair with King Charles while he was married to Princess Diana.

Asking the Duke about this, Bradby suggested that he had been ‘pretty consistently scathing’ about her, to which he snapped back: ‘Scathing, what’s scathing?’ 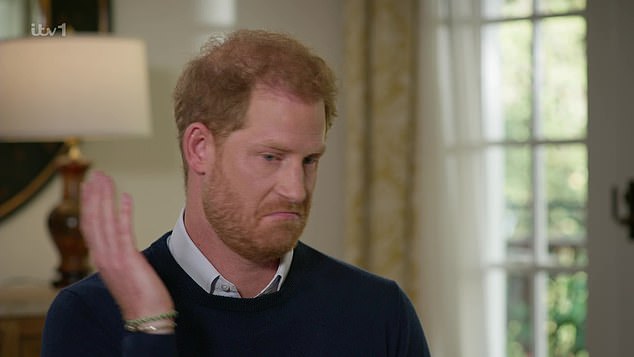 Awkward encounters: Viewers branded the prince ‘defensive’ and said Tom Bradby did not shy away from asking ‘awkward’ questions 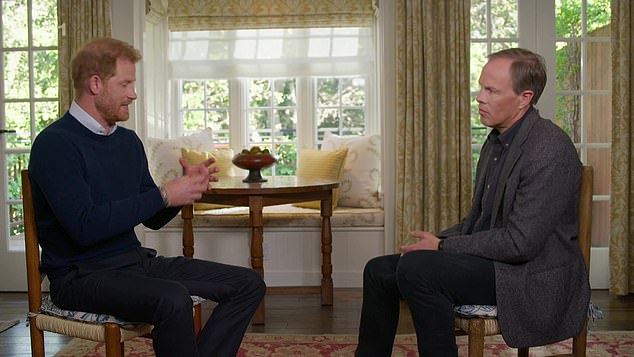 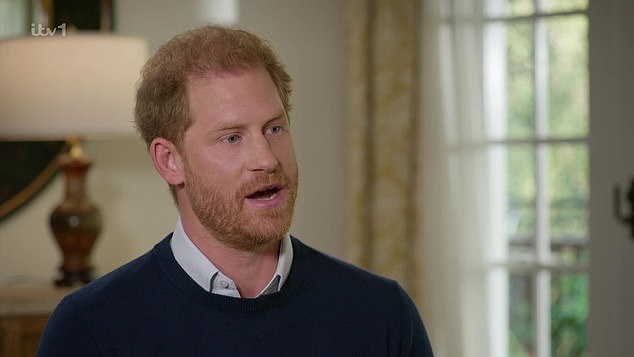 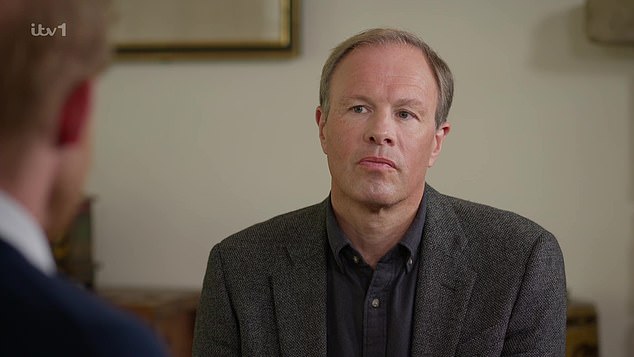 As he then tried to broach the subject of the fallout between William and Harry, Bradby put to him that his brother might have viewed the breakdown of their relationship differently.

He said: ‘I think he would say he found you emotional, defensive, he couldn’t get through to you’, Harry snapped back: ‘It’s quite a list of assumptions you’re making’.

Bradby responded: ‘Well, I’m just saying I think that would be the counter narrative on the other side, that this isn’t the truth, that the truth is more nuanced and all the rest of it.’ 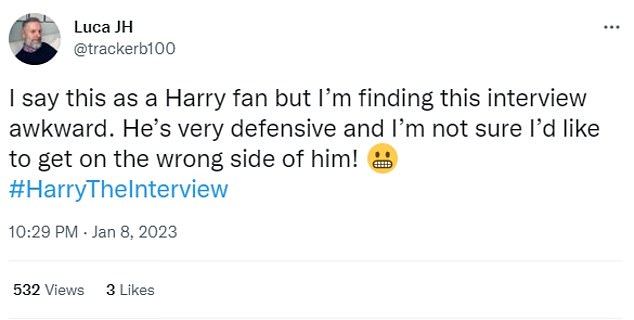 Who is Tom Bradby? Friend of Harry’s who fell out with William

Bradby was born in Malta where his father served in the Royal Navy.

After a short time on the island his family moved back to Britain, and he was privately educated at £20,000-a-year Westbourne House School near Chichester before attending Sherborne School in Dorset.

The famous public school charges £42,000 a year for boarders. It was founded in 1550 but traces its history back more than 1,300 years, with alumni including actor Hugh Bonneville and WWII codebreaker Alan Turing.

Bradby boasts some impressive family connections, with his great-grandmother winning an Olympic gold for tennis in 1908, while his godfather, Matt Bradby, won two caps with the England rugby team in the early 1920s. 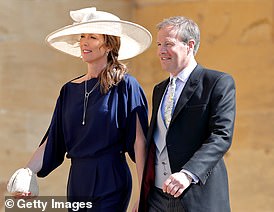 In a 2017 interview, Bradby paid tribute to his family including his mother, Sally, who was a tennis coach.

‘My father Dan was in the Navy and was an honourable man who strove to do the right thing,’ he said.

‘My mum, Sally, was a selfless force of nature. She died of cancer in 2012 aged 72 and my father was 83 when he died from a heart attack last year.’

As host of ITV’s News at 10 since 2015, Bradby is one of the UK’s most recognisable journalists. He joined ITN as an editorial trainee in 1980 and has worked as Ireland correspondent and Asia correspondent.

As royal correspondent, he presented coverage of the Golden Jubilee and the funerals of Princess Margaret and the Queen Mother. He has anchored major events including the Brexit referendum in 2016, the US election in 2020 and Queen Elizabeth II’s funeral.

Bradby also has a career as a fiction writer – publishing nine thrillers including Shadow Dancer, which in 2012 was made into a film. Despite his high profile in the UK, Bradby is less well known in America, and has joked about being mistaken on Twitter for the American football legend Tom Brady.

The journalist has been married to his jewellery designer wife Claudia since 1994 and they have three children, Jack, Louisa and Sam.

The journalist was signed off work for three months in 2018 after developing insomnia and what he describes as an addiction to the sleeping pill zopiclone.

Bradby told how Claudia had warned him he was close to a ‘very dangerous cliff-edge’ and urged him to see a psychiatrist. At his lowest he believed he would lose his family and job.’

Bradby is a friend of the Sussexes and previously interviewed them for a documentary about their 2019 South Africa tour. He famously asked Meghan about her mental health, with the duchess thanking him and saying ‘not many people have asked if I’m ok’.

In their recent Netflix series, Meghan said the interview marked a turning point. She said: ‘There is only so much you can take on your own, so you end up saying, ”Something has to change”. It was a huge turning point.

‘It was when we started having harder conversations about what needs to happen for us to be able to continue to make this work.’

Bradby first got to know Harry when he worked with him on a documentary about Lesotho when the prince was on his gap year after leaving Eton. The journalist went on to attend his 2018 wedding to Meghan. He also went to William and Kate’s wedding, but has since admitted his relationship with the Prince of Wales has suffered amid the fallout from Megxit.

Bradby has said mental breakdown made him treat Meghan and Harry more sympathetically.

In one particularly uncomfortable exchange, Bradby attempted to ask Harry about the part in his memoir where he details losing his virginity to an ‘older woman’ in a field behind a pub at the age of 27.

Bradby said: ‘I won’t spoil it, because there’s an awful lot of material in there. There’s you losing your virginity.’

Harry said: ‘It’s four lines or something, if that. We can talk about you losing your virginity if you want.’

Bradby then let out an awkward laugh as he said: ‘No, let’s not do that, let’s not go there,’ before changing the line of questioning to Harry’s confessions of drug use in the memoir.

In Spare, Harry has opened up about trying cocaine ‘a few times’ at the age of 17 and hallucinating that a bin was talking to him while on magic mushrooms.

The Duke described being called up by a tabloid editor to say they had obtained a photograph of him taking cocaine.

‘That to me, is more public interest than anything else. But myself itself has been put through a blender as such.’

The interview also brought up allegations of racism within the Royal family after the couple claimed during their now infamous Oprah Winfrey interview that an unnamed member of the household asked the colour of baby Archie’s skin.

Harry said he would not describe as racist comments allegedly made by an unnamed family member about Archie’s skin colour, after the bombshell allegation was raised during the Sussexes’ interview with US chat show host Oprah Winfrey last March.

Harry told Tom Bradby: ‘You speak to any other mixed race couple around the world, and you will probably find that the white side of the family have either openly discussed it, or secretly discussed ‘What are the kids gonna look like?’

‘And that is part of a bigger conversation that needs to be had.

He added: ‘The difference between racism and unconscious bias, the two things are different.

‘But once it’s been acknowledged, or pointed out to you as an individual, or as an institution, that you have unconscious bias, you therefore have an opportunity to learn and grow from that in order so that you are part of the solution rather than part of the problem.’

Asked why he had not identified the family member involved, Harry said: ‘I will never talk about that.’

But the exchange again became awkward when Bradby asked him about the allegations of racism.

Bradby said to Prince Harry: ‘In the Oprah interview you accused members of your family of racism,’ before he cut in to insist: ‘No I didn’t, the British press said that.’

Appearing taken aback, Bradby said: ‘Wouldn’t you describe that as essentially racist?’ Harry replied: ‘I wouldn’t, not having lived within that family.’

The Duke also said Lady Susan Hussey ‘never meant any harm’ to the charity campaigner who accused her of racial abuse.

Harry also defended the former lady-in-waiting to the Queen, who was embroiled in a race row and later resigned from her position after repeatedly asking Ngozi Fulani where she was ‘really from’ during a Buckingham Palace reception in November.

Lady Susan later met up with Ms Fulani, who was representing abuse charity Sistah Space at the event, and apologised.

In ITV’s Harry: The Interview, the royal continued to back Lady Susan – and he said he would never reveal the identity of the family member who allegedly enquired about son Archie’s skin tone.

He said: ‘I’m very happy for Ngozi Fulani to be invited into the palace to sit down with Lady Susan Hussey and to reconcile, because Meghan and I love Susan Hussey.

‘And I also know what she meant – she never meant any harm at all.

‘But the response from the British press, and from people online because of the stories that they wrote, was horrendous. (It) was absolutely horrendous, the response.’

His backing comes in contrast to his brother, Prince William, whose spokesman condemned as ‘unacceptable’ the comments made by Lady Susan, the heir’s own godmother, in the wake of the furore.

In another awkward exchange, Bradby described Harry’s relationship with his family as a ‘sort of Shakespearean tale’ to which he snapped: ‘You’ve probably read more Shakespeare than I have’.

Viewers were quick to praise Bradby for not ‘shying away’ from asking awkward questions.

One person said: ‘Tom Bradby is a fantastic interviewer. This has been balanced, relaxed and informative. He’s asked Harry some awkward questions which he hasn’t shied away from #HarryTheInterview’.

Another said: ‘Have you noticed that as the interview has gone on #PrinceHarry has started angrily staring at Tom Bradby more and more, as if he sees him as an enemy, asking increasingly awkward questions #harrytheinterview’.