This is the terrifying moment a reckless Audi driver almost causes a collision on a dual carriageway when it overtakes a van and drives the wrong way down a slip road.

Footage captured on a dash cam shows a grey Audi speeding along a dual carriageway in the path of a van and try to drive onto the slip road near Langhurst Wood Road, Horsham.

But the driver quickly realises the road is blocked by another vehicle and so the Audi motorist performs a dangerous U-turn and careers the wrong down the on-ramp. 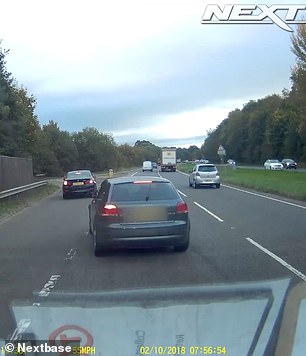 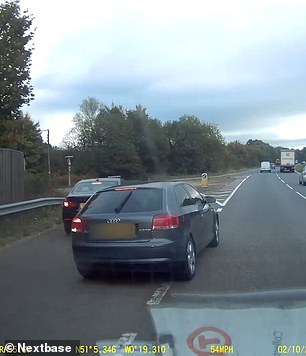 A grey Audi speeds along a dual carriageway in the path of a van and try to drive onto the slip road near Langhurst Wood Road, Horsham

Glenn Hodges, a van driver, captured the shocking moment as he approached a slip-road off the A264.

Seeing the BMW in front of him indicate to take the turning, Mr Hodges decreased his speed, and was startled to see a grey Audi A3 shoot past and cut in front of him.

The Audi attempted to take the slip-road, with barely any room to spare, while Mr Hodges’ Dash Cam shows speeds of around 55mph.

But the Audi did not see the BMW blocking the path and had to take dangerous evasive action to avoid a collision. 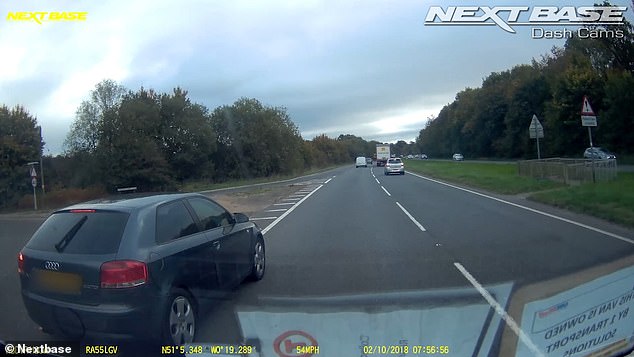 Mr Hodges had to brake hard to avoid hitting the rear of the Audi as it swerved across his lane.

Fortunately, Mr Hodges was aware of a silver Mazda to his right and to avoid collision he did not move into the outside lane.

Mr Hodges, who captured the incident on his Nextbase 412GW Dash Cam, said: ‘I don’t make a habit of sharing my dash dam footage, but this needed to be seen to demonstrate the dangers of cutting someone up.

‘It’s lucky that I drive for a living. I’m an experienced driver, so I know how to handle most situations, but this one really shook me up as it all happened so fast. 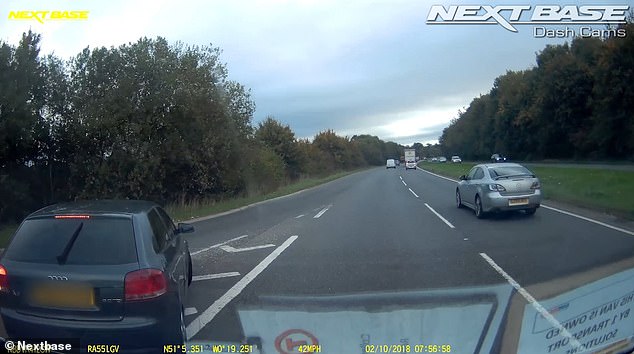 ‘If I had swerved and hit the silver Mazda, the driver would have been forced into oncoming traffic and possibly injured – all because of the Audi driver making a nonsensical, rash decision!’

Richard Browning, Director at Nextbase, said: ‘Only split-second reactions from Glenn prevented what could well have been a multi-vehicle collision, and we are of course relieved that no-one was hurt by this incredibly reckless piece of driving.

‘The footage from Glenn’s Dash Cam will help the police to identify the culprit and it will then be up to them to determine a suitable course of action.

‘Whatever they decide, it is to address incidents of dangerous driving such as this that we launched the National Dash Cam Safety Portal.

‘By giving drivers the ability to upload incidents which put other motorists’ lives at risk directly to the relevant police force, and the more streamlined means of processing this footage, we hope to improve road safety across the board.’