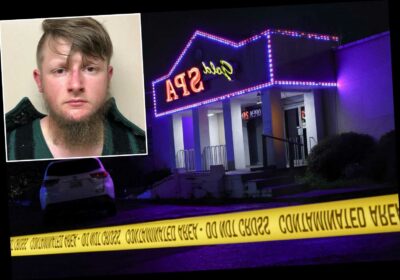 Sandra Oh speaks out at Stop Asian Hate rally: ‘I am proud to be Asian’

Man whose wife died in Atlanta spa was handcuffed, ‘treated like a suspect’

Accused Atlanta spa shooter Robert Aaron Long surrendered within 30 seconds of his car being rammed by state troopers pursuing him, according to an arrest report.

Long, 21, was heading south on Interstate 75 in Crisp County just hours after the massacre at three massage parlors Tuesday when a trooper spotted his black Hyundai Tuscon and rammed it to stop him, the Atlanta Journal-Constitution reported.

“The driver, later identified as Mr. Robert Aaron Long, sat motionless for approximately 30 seconds,” a trooper wrote in a report.

The trooper described how he had been able to nab Long by deploying a technique known as a PIT maneuver, which caused his car to spin out of control.

“To ensure the violator did not recover from the PIT, I used the front of my patrol car to contact the left side of the vehicle when it came back into my path of travel,” the trooper wrote. “This successfully disabled the vehicle.”

Long was arrested without incident and taken to Crisp County jail before he was transferred to Cherokee County jail.

He was charged with eight counts of murder and one count of aggravated assault in connection to the shooting spree that left eight dead and one wounded.

He allegedly confessed to the rampage and blamed it on his “sex addiction,” claiming that he was trying to get rid of sources of temptation, authorities said.

Police have said Long gave no indication that the massacre was motivated by racial hate, despite six of the eight victims being women of Asian descent.

State officials, however, said they’re still investigating and more charges could be brought against him, including possible hate crime offenses.