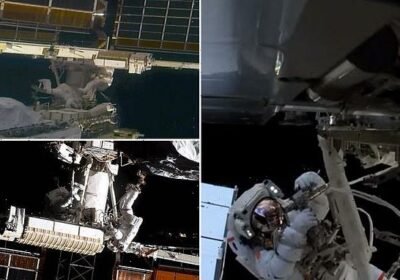 Spacewalking astronauts installed the first in a series of powerful new solar panels on the International Space Station Sunday, while overcoming suit problems and other obstacles with muscle and persistence.

It took two spacewalks, one on Wednesday and the other on Sunday, for French astronaut Thomas Pesquet and NASA astronaut Shane Kimbrough to install and unfurl the panel to its full 63 feet (19 meters) in length.

The solar wing finally unrolled like a red carpet on Father’s Day once the final set of bolts was released, relying solely on pent-up energy. The slow but steady extension took 10 minutes, with station cameras providing live TV coverage of the problematic spacewalk installation.

Wednesday’s spacewalk ended after seven hours and 15 minutes after problems with display and controls on the American’s spacesuit forced him to return to the station to reset his systems.

The time lost meant they were only able to maneuver the panel into position, but unable to install the cabling and bolts needed to complete the process. 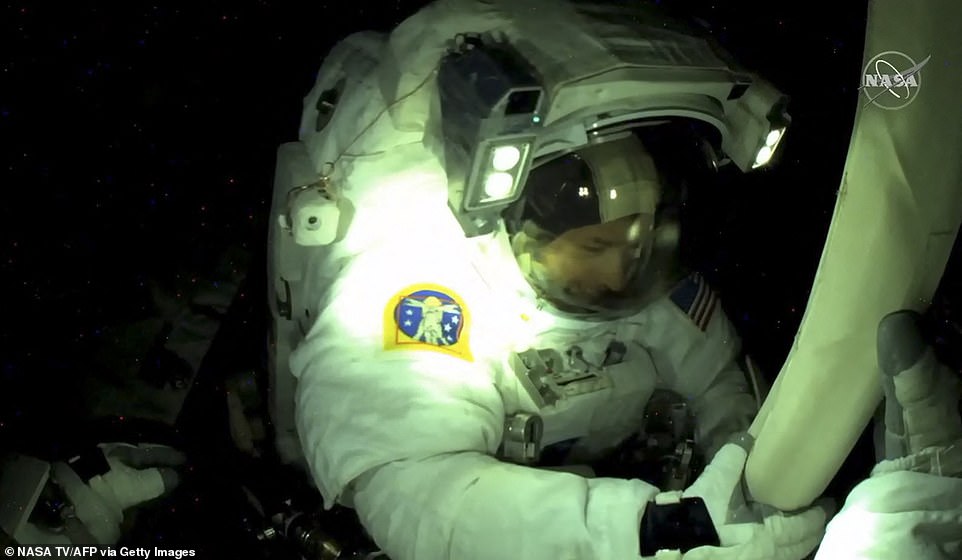 US astronaut Shane Kimbrough (pictured) seen from Thomas Pesquet’s helmet camera, as the American fixes bolts during the unfolding and alignment of the solar panel 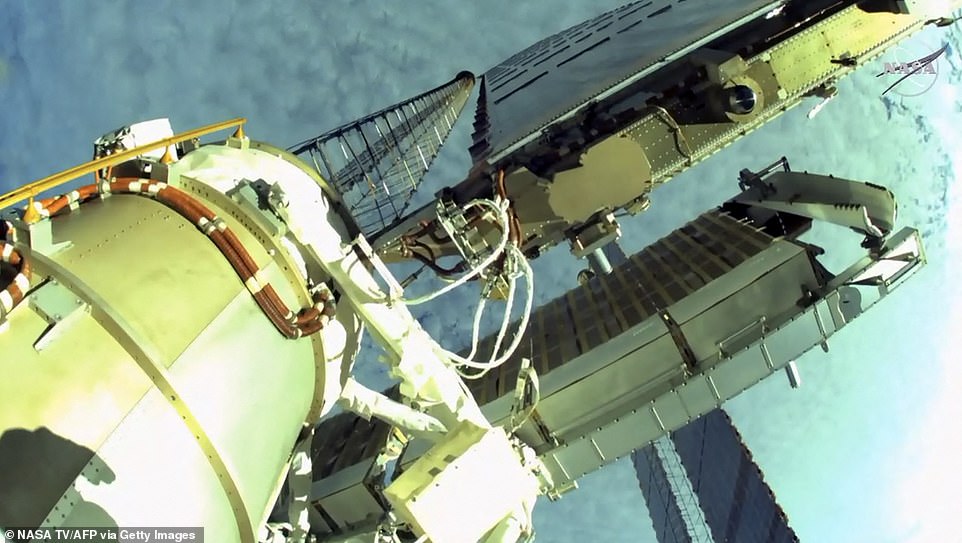 The solar panel was finally unfurled on Sunday, after technical issues forced an early end to Wednesday’s spacewalk installation 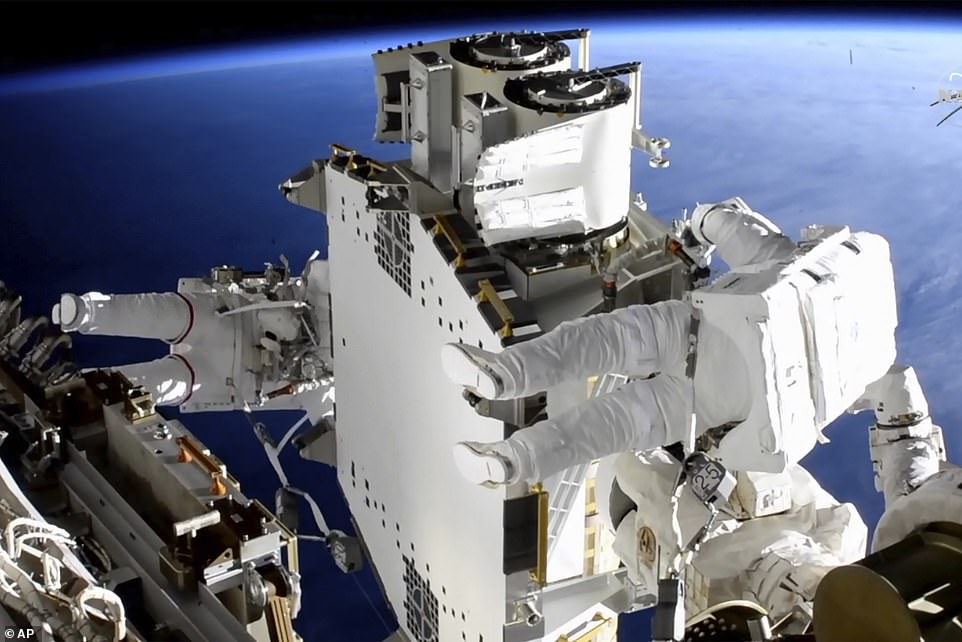 The crew worked on the panels for over six hours during Father’s Day, and a third spacewalk mission is already being planned for Friday

Sunday’s spacewalk saw the two astronauts picking up where they left off Wednesday, when a string of new problems prevented them from unrolling the high-tech solar panel.

‘Remember: You are butterflies with biceps today,’ astronaut Megan McArthur radioed from inside the space station.

After pushing and tugging, the spacewalkers managed to unfold and align the solar panel so both halves were now end to end, resembling a roll of paper towels. Their shout of ‘Woo-hoo!’ was met with applause in Mission Control.

The two had to wait until they were back on the night side of Earth when the station’s old solar panels were no longer soaking up sunlight and generating power before making the final power connections.

Otherwise, they could have been shocked, according to NASA officials.

While awaiting darkness, the camera-and-light assembly on Kimbrough’s helmet came loose, even though he’d switched to a different suit to avoid the trouble he encountered last time. Pesquet did his best to secure it with wire ties, as the minutes ticked by. His effort paid off, and the final step – the actual unfurling – went off without a hitch.

This new solar wing – with five more to come – will give the aging station a much needed electrical boost, as demand for experiments and space tourists grows. 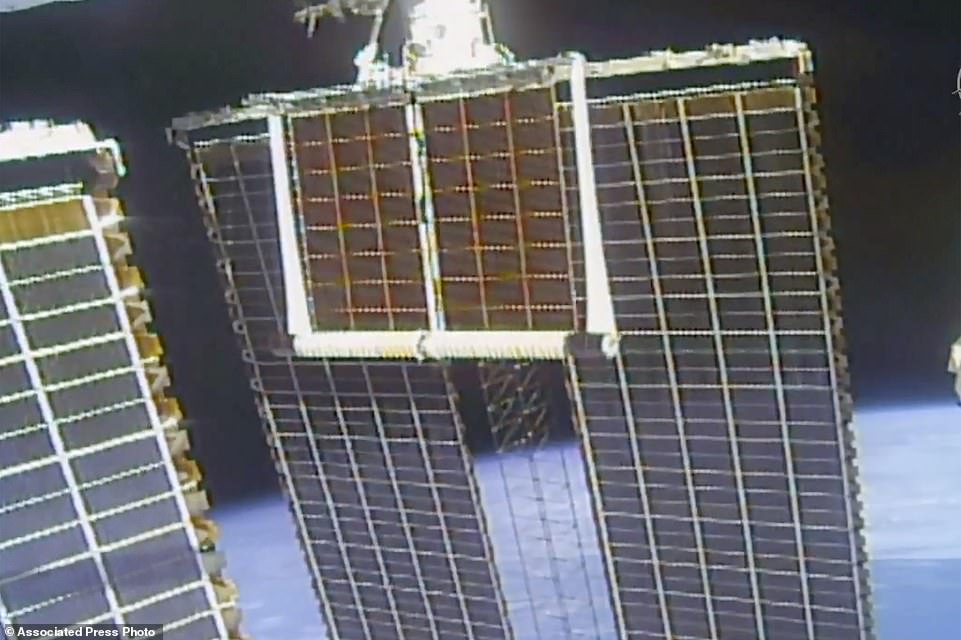 In this image taken from NASA video, a solar panel is unfolded at the International Space Station on Sunday despite suit problems and other obstacles with muscle and persistence 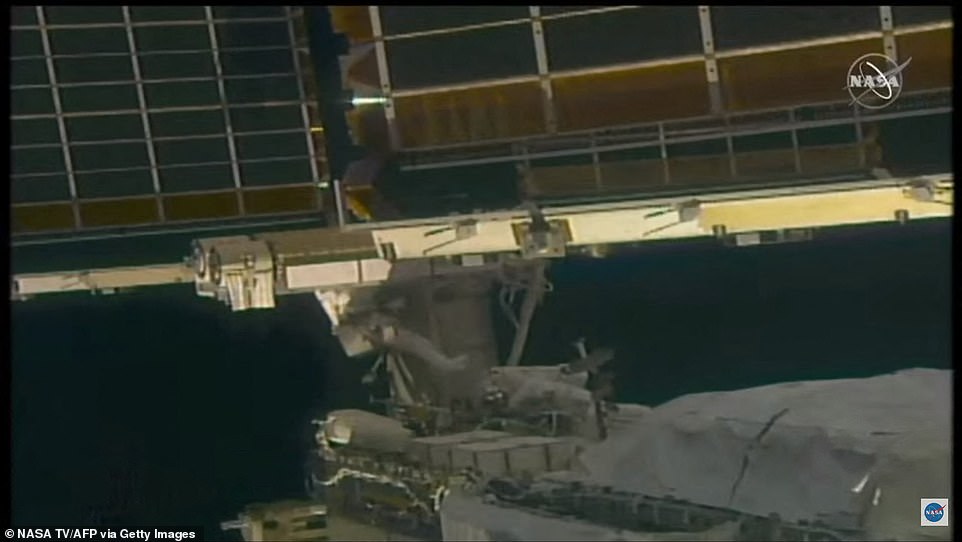 NASA originally allotted two spacewalks for the job – one for each solar panel being installed. But managers added a third spacewalk, given all the earlier problems.

Pesquet and Kimbrough will go back out Friday to complete work on the second panel delivered by Space X earlier this month.

This first pair will augment the space station’s oldest solar wings, which are degrading after 20 years of continuous operation.

SpaceX will deliver two more pairs over the next year. 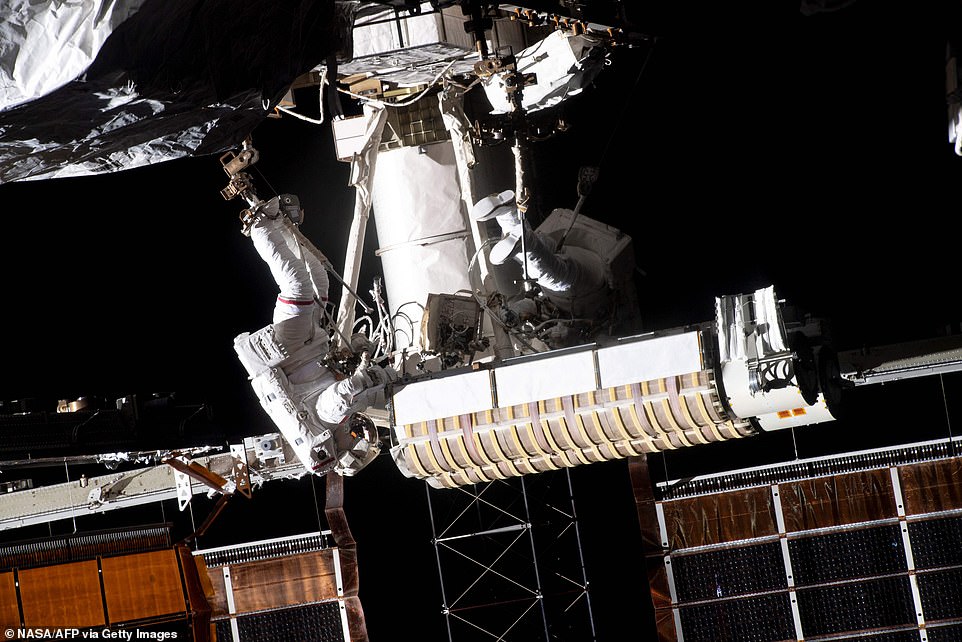 NASA had originally planned for only two spacewalks to install the panels, however a third, set for Friday, will be needed to complete the job

Although smaller than the originals, the new solar panels supplied by Boeing can generate considerably more power. The space station needs this reenergizing if NASA hopes to keep the space station running the rest of this decade, with private guests paying millions of dollars to come aboard.

A Russian film crew is scheduled to launch to the orbiting outpost this fall from Kazakhstan, followed by a string of rich businessmen. SpaceX is providing the rides from Cape Canaveral.

On Wednesday, the display control panel on Kimbrough´s suit broke and he had to return to the air lock to reset it. Then his cooling system registered a momentary pressure spike. Engineers are still evaluating what went wrong, according to NASA officials.