As COVID-19 cases speed up, Korean gym users told to slow down 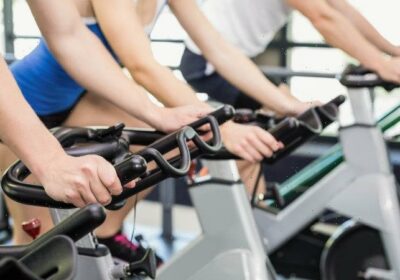 Seoul: As South Korea endures its worst wave of the coronavirus yet, government officials rolled out a plan for Seoul that would limit social gatherings and close nightclubs, some of the routine steps that health officials around the world have taken to limit the spread of the virus.

It also included some not-so-routine restrictions.

Under the regulations, which are in effect through July 25, gyms can remain open, but the treadmills must run no higher than 5.9 km/h. And the music played at the gyms must be no faster than 120 beats per minute, roughly the speed of Call Me Maybe by Carly Rae Jepsen. 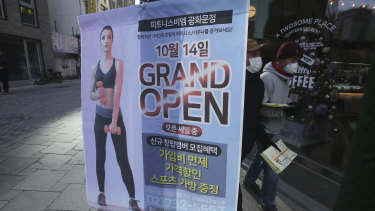 Keep the beats down: An ad of a fitness center opening sits on a street corner in Seoul, South Korea.Credit:AP

Health officials said the measures were to prevent people from breathing too hard or sweating on other people. But gym-goers, public health researchers and other observers were confused by the specific guidelines.

“I wish people would listen to the experts,” Kim said.

Other songs around 120 beats per minute include Born in the U.S.A. by Bruce Springsteen, Bad Romance by Lady Gaga, Respect by Aretha Franklin and, appropriately, The New Workout Plan by Kanye West. (In K-pop terms, Boombayah by Blackpink comes in just over the line at 123 beats per minute, while the BTS hit Boy With Luv is barely permissible at 120.)

A standard walking pace is a bit more than 4.8 km/h, putting 5.9 at roughly the speed one might move if someone else were holding a door open ahead.

The restrictions are meant to battle a wave of virus cases that has alarmed many in South Korea, which had succeeded at maintaining low levels of infections throughout the pandemic but is now contending with the delta variant and a flagging vaccination drive. Just 11 per cent of the population is fully vaccinated, with 30 per cent having had one dose, and appointments have been halted because of a lack of vaccine supply.

Gyms, especially those offering group fitness classes, can present chances for the virus to spread, but the risk can be lowered by improving ventilation, distancing from other exercisers and wearing masks. The Centres for Disease Control and Prevention found that heavy breathing during intense exercise in confined indoor spaces increased chances of transmission.

On Tuesday, some gym-goers in Seoul said they were relieved that facilities weren’t shut down entirely, as the government has mandated several other times during the pandemic, but they were confused by the new rules. Exercisers were also required to wear masks, even if fully vaccinated, and class sizes were limited.

Kang Seung hyun, a teacher and former rugby player preparing for a fitness photo shoot, said his gym had elected to shut off the treadmills instead of enforcing the slow pace. The bikes, however, remained open for reasons he didn’t understand.

“So we can’t run or use the treadmills, but we can bike? It seems weird to me,” he said.

Ralph Yun, a CrossFit coach who has been teaching for the past five months, said listening to music at a similar pace to your heart rate could increase performance, but it doesn’t necessarily make you work out harder.

“You could be listening to slow music and exercising just as intensely,” he said.

Costas Karageorghis, a professor at Brunel University in London who has studied the effects of music on exercise for 30 years, was amused by the recommendations, calling them “ludicrous.”

“If people are motivated enough to work out at a high intensity, there’s nothing about the music that’s going to stop them,” he said.

That said, research has shown that music can significantly alter one’s workout, even if not in the way that Korean authorities had intended.

Karageorghis said the sweet spot for aerobic exercise, like running on a treadmill or cycling, was 120 to 140 beats per minute. The music can distract the mind from feelings of fatigue, lowering your perception of how hard the body is working and improving your mood. Louder music, above 75 decibels, can intensify a workout, although very loud music creates the risk of hearing problems like tinnitus.

He said he was unsurprised the health officials chose 120 beats, as there has been research suggesting it was a “key cutoff” in some ways. It’s roughly twice the low end of a healthy resting heart rate, and 120 steps per minute is a common rate of walking, he said.

Wedding D.J.s have told him they’ll use a 120-beat song to entice people onto the dance floor (Whitney Houston’s I Wanna Dance With Somebody checks in at about 120).

But there is much more to the energising properties of music than the tempo, Karageorghis said, including inspiring lyrics. And while syncing strides with the music can increase intensity, most people don’t do that, Karageorghis said.

Even if exercisers do sync their strides, keeping songs under 120 beats wouldn’t necessarily help: Some of the athletes he works with will choose a slower rap song and fit two strides into each beat.

“There are many pieces of music that are far slower than 120 that are extremely energizing,” he said.