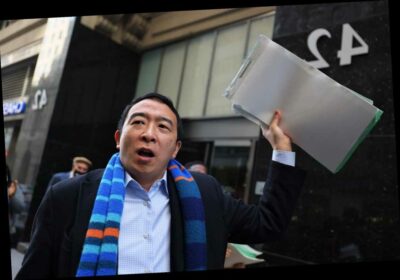 US goes wobbly under Biden: Goodwin

Bubble Biden clearly not up for tough questions — or the job: Goodwin

The 10 questions Cuomo must answer: Goodwin

Andrew Yang must have seen this one coming. Democrats who want to be mayor all know that teachers’ unions are like a third rail. Touch it and your career is dead.

But Yang didn’t just touch the third rail. He grabbed hold with both hands and let the world know what he was doing.

His words were the explosion heard ’round the five boroughs, all the more so because Yang is way out front in early polls, gaining upwards of 30 percent support in a fractured field. His comments were so unusual they sparked speculation that his inexperience in New York politics was showing.

Maybe, but not likely. Yang is a smart guy who ran for president as a Dem, so he had to know that teachers unions are the backbone of the party.

My guess, my hope, is that Yang knew the risk he was taking and decided that, good politics or not, somebody had to say what every parent knows is true.

Whatever the reason, Yang’s comment is the most important and interesting thing said by any of the Dem mayoral candidates. Finally, he has made the race about something.

For months, the candidates — about 40 of them — have been raising money, putting out press releases and participating in Zoom forums, all while giving the impression their goal was to make neither waves nor news.

The aim was to promise everybody everything and pander to the municipal unions. The only word not spoken was “no,” as in no, the city can’t afford that.

Thankfully, Yang broke the spell of cravenness, which naturally made him a target of his rivals. With the UFT endorsement still up in the air, his closest competitors sought to prove their allegiance by pummeling Yang.

Among them was Brooklyn Borough President Eric Adams, who has won some municipal union endorsements and is running second for the nomination in most polls.

After noting that the UFT represents 200,000 employees in the city system, Adams tweeted that they are New Yorkers “who’ve risked so much & fought so tirelessly to protect our kids. Attacking teachers is just wrong. I won’t stand for that.”

He is surely right about the dedication of some members, but is he denying that the union fought tooth and nail to delay, delay, delay school openings? The UFT has been so bad that it even makes Mayor de Blasio look reasonably good on the topic.

Maya Wiley, a former lawyer under de Blasio, who is running third, took the same approach as Adams, declaring that “it’s not time to blame our teachers for anything.”

To some pols, there is never a good time for union accountability, which is how the city got in this mess in the first place.

Yet perhaps the candidate who stands to benefit most from Yang’s attack on the union is Comptroller Scott Stringer. For him, the frontrunner’s comment was a gift from the gods.

He accused Yang of trying to score “cheap political points at the expense of our teachers,” which is odd given that the remarks were politically risky. Stringer also tried to invoke Donald Trump, saying of Yang that “We don’t need another leader who tweets first and thinks later.”

The response was predictable because Stringer, stuck with dismal, single-digit support in most surveys, owes his career largely to UFT backing. The union pulled out the stops to help him win his first run for Manhattan borough president back in 2005 and he’s clearly hoping for a repeat.

His chief opponent in that race, then-Council member Eva Moskowitz, had angered the union by holding hearings that demonstrated how restrictive work rules had thwarted common sense approaches to education and school maintenance. For that, she had to be canceled.

Moskowitz, of course, turned her defeat into a victory for education by founding and expanding the Success network of charter schools, which is proving that race and zip code don’t have to be destiny. Her students, nearly all black and Latino from the poorest neighborhoods, routinely outperform regular city schools in standardized exams and often rank among the best schools in the state. The fact that her schools operate outside union rules is a significant part of her Success.

Because Moskowitz embarrasses them and their union funders, most Democrats like de Blasio hate her.

That dynamic also explains much of Stringer’s career. Since 2005, he and the union have scratched each other’s backs, a friendship that has benefited everyone except students and their families.

His two terms as comptroller are largely forgettable, with even his criticisms of de Blasio bland. Having assumed that term limits and waiting his turn would eventually land him in City Hall, he has always floated with the prevailing winds.

As his party lurched left, so did he, and now makes all the required noises about total police reform, loads more spending and tax hikes.

His education plan would be a boon for the union as it calls for hiring more teachers, after school and child care workers–while costing taxpayers more than $1 billion. He also wants free community colleges.

Although the UFT endorsement does not guarantee victory, it could be uniquely important to Stringer. If he wins its backing and his campaign rises from the near-dead, it will mark a turning point in his chances. And if he becomes the nominee and then mayor, the union would be in a position to practically name its price.

Whatever it is, rest assured it will be better for the union than children and families.

Nothing to see here!

Columnist Charles Lipson hits the bullseye. Writing on Real Clear Politics about the immigration crisis on the southern border, he says the Biden administration’s denial of the facts “is reminiscent of the most dazzling press spokesman of modern times, ‘Baghdad Bob,’ mouthpiece for Saddam Hussein during the Iraq War.”

From the department of duh

Buried inside the New York Times coverage of the horrific slaughter in Boulder, Colo, was this paragraph, printed without elaboration:

“The suspect’s identity was previously known to the FBI because he was linked to another individual under investigation by the bureau, according to law enforcement officials.”

If history is any guide, we’re going to be learning a lot more about that angle in coming days. In fact, it may turn out to be the most important angle of all, which is probably why the Times buried it.

Why was Ahmad Al Aliwi Alissa “known to the F.B.I” and what was his relationship to the other “individual under investigation?”