The massacre of 19 children and two teachers in a Texas elementary school this week started and continued amid numerous instances of mistakes, misjudgments or misfortune, according to newly released details.

A Texas official on Friday laid out the clearest picture yet of what authorities believe happened before, during and immediately after the rampage. Steven McCraw, director of the Texas Department of Public Safety, spoke to a crowd of reporters frustrated by the changing narrative of what happened Tuesday morning.

He detailed numerous points where the shooter could have been stopped.

At 11:27 a.m. Tuesday morning, a teacher at Robb Elementary School propped open a door to the building, McCraw said.

One minute later, the gunman crashed a vehicle into a ditch nearby. The teacher ran to one of the classrooms to retrieve a phone and then walked back to the exit door, which was still propped open.

Meanwhile, two men at a nearby funeral home heard the crash and went to the scene, where they saw a man with a gun and backpack exit the vehicle. The men “immediately” began running as the gunman shot at them, McCraw said. They were not shot.

‘THERE ARE NO WORDS’: Families mourn as names of Uvalde victims emerge

The next minute, the gunman reached the last row of vehicles in the school parking lot and began shooting into at least three classrooms, just as law enforcement vehicles arrived at the funeral home. The gunman entered the school through the open door two minutes later, at 11:33 a.m., McCraw said.

Officer ‘drove right by the suspect’

There was not a school resource officer at the school when the shooter arrived Tuesday, McCraw said. Uvalde has a part-time SWAT team, and the Uvalde Consolidated Independent School District has six officers, McCraw said.

Instead, a resource officer who was not on campus heard the 911 call of a man with a gun and “drove immediately” to the school, McCraw said. The officer “sped to what he thought was the man with the gun” near the back of the school, but it “turned out to be a teacher,” McCraw said.

“In doing so, he drove right by the suspect,” who was hunched behind a vehicle, where he began shooting at the school, McCraw said. 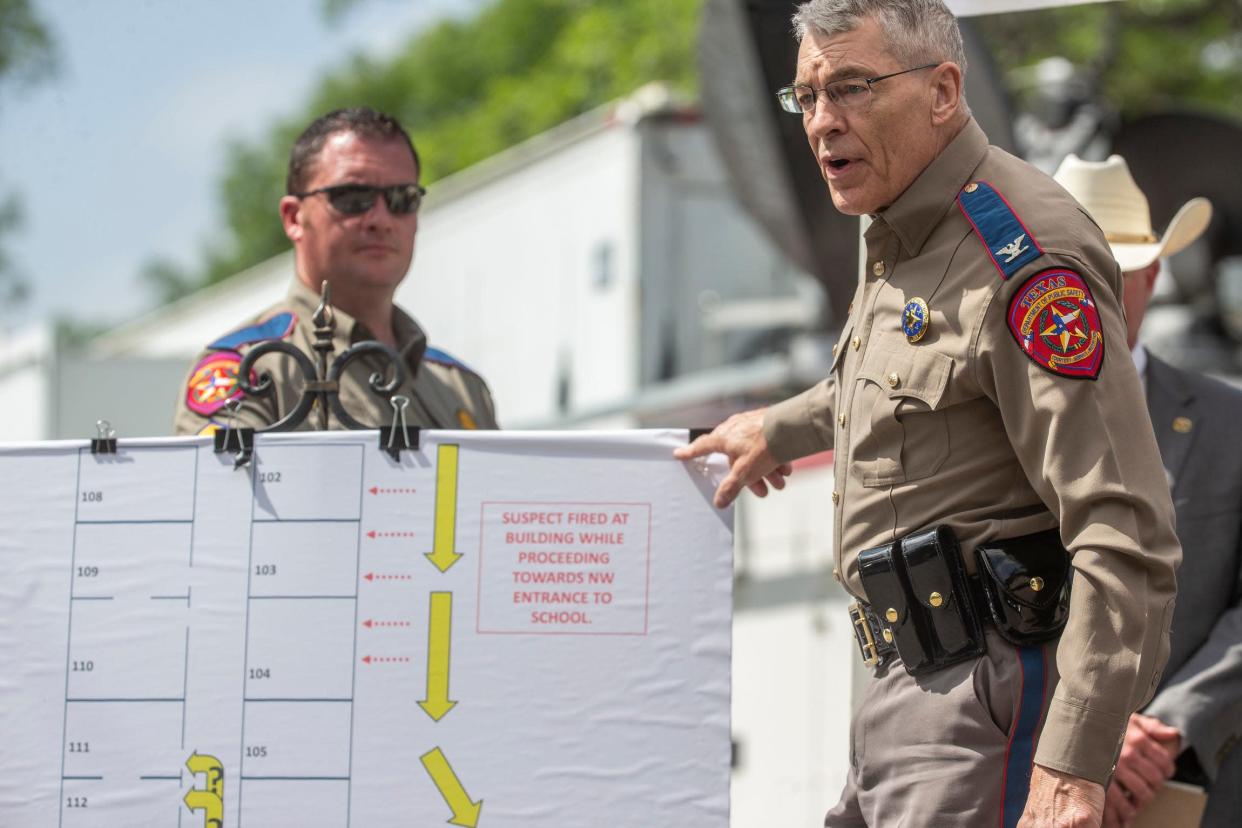 Once inside the building, at 11:33 a.m., the gunman began shooting in one of two classrooms and shot more than 100 rounds, McCraw said.

During the incident, the gunman “came out one time” into the hallway before going back in, McCraw said, not specifying exactly when the gunman came out.

Officers close enough to suspect to be wounded, but rampage continues

Two of the initial three officers went directly to the door and “received grazing wounds from the suspect while the door was closed.” McCraw did not say if the officers fired back.

At 12:03 p.m., as many as 19 officers were in the hallway, he said. “There was 19 officers in there. In fact, there was plenty of officers to do whatever needed to be done,” he said later.

About that same time, members of the Border Patrol Tactical Unit (BORTAC) arrived, along with three ballistic shields, at 12:21 p.m., McCraw said. That’s when the gunman fired again and was believed to be at the door, he said.

No immediate effort to break through locked door

The doors to the two adjoining classrooms were locked, McCraw said, and no efforts were made to open the doors.

“The on-scene commander at the time believed that it had transitioned from an active shooter to a barricaded subject,” McCraw said.

He later added: “A decision was made that this was a barricaded subject situation, there was time to retrieve the keys and wait for a tactical team with the equipment to go ahead and breach the door and take on the subject at that point.”

McCraw later identified the incident commander as the chief of police of the school district, who was not at the news conference.

In retrospect, it is clear “there were children in that classroom that were at risk, and it was, in fact, an active shooter situation and not a barricaded subject,” McCraw said.

“It was the wrong decision. Period. There’s no excuse for that,” McCraw said. “There should have been an entry.” 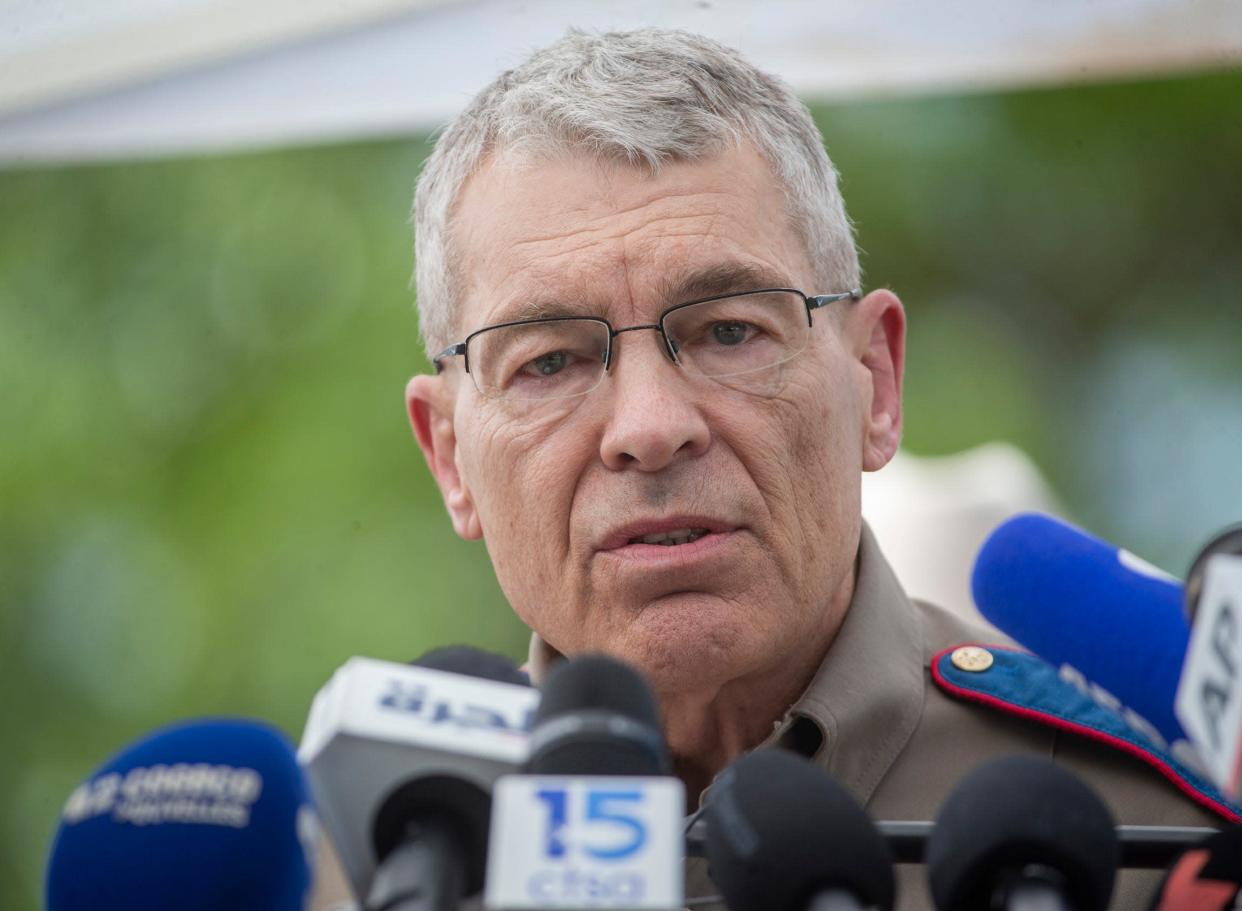 In an active-shooter situation, officers are not required to wait on tactical gear, McCraw said. “If shooting continues and you have any reason to believe there’s individuals alive in there, you’ve got an obligation to move back to an active shooter posture, and that means everybody at the door,” he said.

Asked by a reporter how many children could have been saved if the door had been breached earlier, McCraw responded: “I don’t know.”

In the meantime, several more 911 calls came in from people inside the two classrooms.

The officers breached the door at 12:50 p.m. “using keys that they were able to get from the janitor because both doors were locked.”

Thirty-five spent law enforcement cartridges were found in the school, McCraw later said. Eight were in the hallway, and 27 were in the classroom where the gunman was killed.

As the attack unfolded, neighbors and parents screamed and pleaded with officers to enter the school and save the children, the Austin American-Statesman, part of the USA TODAY Network, reported. 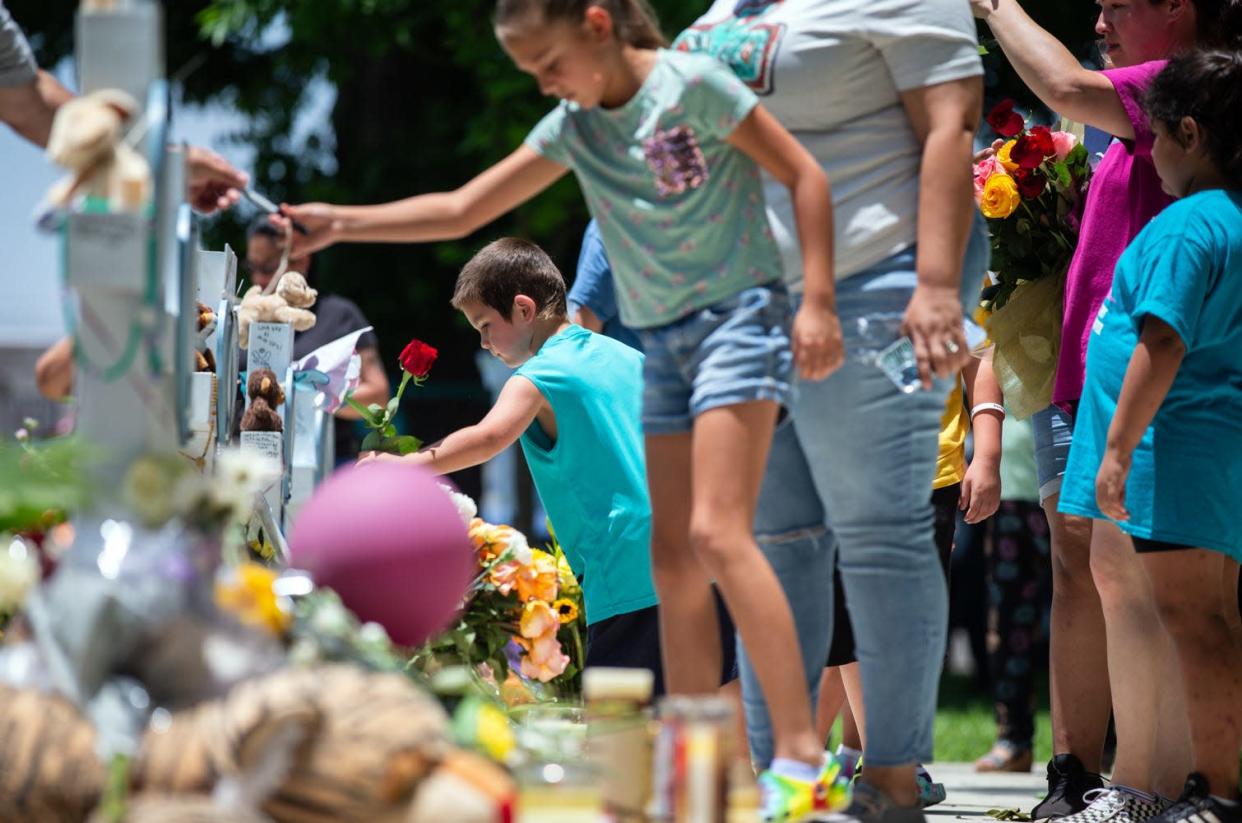 One reporter asked McCraw why the gunman wasn’t on the “radar” of law enforcement.

“I wish he was,” McCraw said. He later added: “Ideally, we’d have been able to identify this guy as a suspect and address it before he even thought about attacking on the 24th.”

One reporter asked McCraw if law enforcement could have shot into the classrooms from the outside rather than focus on entering through the locked doors along the hallway.

“As for if someone could have shot opposite in that regard, I don’t have the answer to that,” McCraw said. “Keep in mind, you’ve got children in here.” McCraw added: “There’s other access points as well.”

Asked by a reporter why the school was not placed on lockdown, McCraw became emotional and did not answer the question.