Home » World News » An Italian woman has been accused of taking more than $500,000 from Pope Francis’ charity fund and spending it on Prada shoes, Chanel perfume, and expensive leather

An Italian woman has been accused of taking more than $500,000 from Pope Francis’ charity fund and spending it on Prada shoes, Chanel perfume, and expensive leather 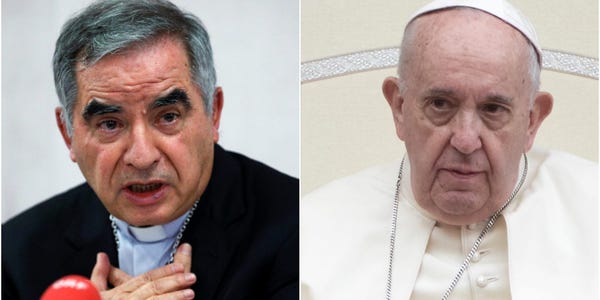 An Italian woman with ties to a top Vatican official who was fired last month has been accused of taking more than $500,000 from Pope Francis' charity funds and spending the money on luxury goods.

Cecilia Marogna, 39, was arrested on Tuesday, Italian police and the Vatican told Reuters.

Marogna had worked for Cardinal Angelo Becciu, who was fired by Pope Francis last month after being accused of embezzlement and nepotism, which Becciu has denied. Italian media suggested Marogna was 's secret lover. Marogna has denied the claim, according to The Daily Beast.

In an interview with Corriere Della Sera, translated by The Daily Beast, Marogna admitted to taking €500,000 ($585,000) from Becciu and the Vatican's charity fund over the span of four years.

She told the media site that she used the funds to set up a "parallel diplomacy" arm to help protect missionaries in conflict zones in Africa and the Middle East.

A senior Vatican source said Holy See magistrates told Reuters, however, that she embezzled the funds instead.

Marogna was arrested in Milan and is awaiting extradition to the Vatican.