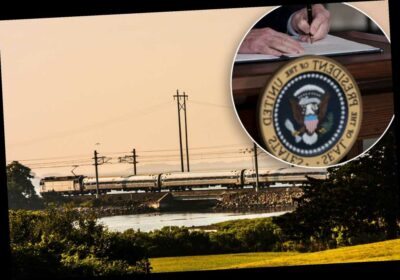 These 2 NYC projects could benefit under Biden’s infrastructure plan

Biden’s aims to bankrupt a generation

All aboard the money train!

Amtrak officials have released their response to President Biden’s $2 trillion infrastructure package — a pie-in-the-sky railroad map with dozens of new destinations and routes.

The proposed transcontinental network would include 160 new destinations and over 30 new routes, Amtrak said. The network would bring in 20 million additional riders annually.

Under the proposed network, rail fans could travel between Los Angeles and Las Vegas, New York and Allentown, Cheyenne and Denver, or Cleveland and Cincinnati — trips mostly impossible by train today.

In Texas, riders could ride in a loop from Fort Worth to Dallas, down south to Houston, east to San Antonio then north through Austin on their way back to Fort Worth.

From Atlanta, they could take one of five intercity routes to Alabama, Tennessee, South Carolina or the Georgia coast. Phoenix would also become part of the Amtrak network.

But Amtrak also needs that money to make costly repairs along the busy Northeast Corridor between Boston and Washington, DC — including the $30 billion Gateway project, which includes a new rail tunnel between New York and New Jersey.

“The NEC’s many major tunnels and bridges — most of which are over a century old — must be replaced and upgraded to avoid devastating consequences for our transportation network and the country,” Amtrak CEO Bill Flynn said in a statement.

“Amtrak must rebuild and improve the Northeast Corridor and our National Network and expand our service to more of America.”

Biden — a noted Amtrak fan — wants to fund the massive infrastructure spending through tax hikes on corporations and wealthy individuals.