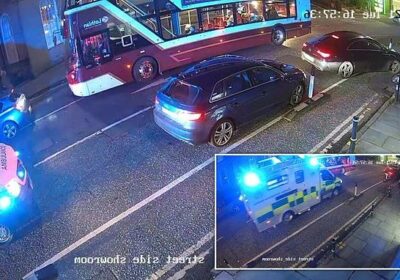 This is the shocking moment an ambulance on a 999 call got stuck in traffic when a car got jammed in a controversial new cycle lane that the council installed ‘by surprise.’

Cycle lanes on Cannonmills in Edinburgh were installed as part of the city council’s Spaces for People project which was introduced during the pandemic in a bid to give people more space around the area.

The lane has plastic rods installed along it- which caused a ‘pantomime’ when a car attempting to give way to an ambulance found itself trapped on Tuesday evening. 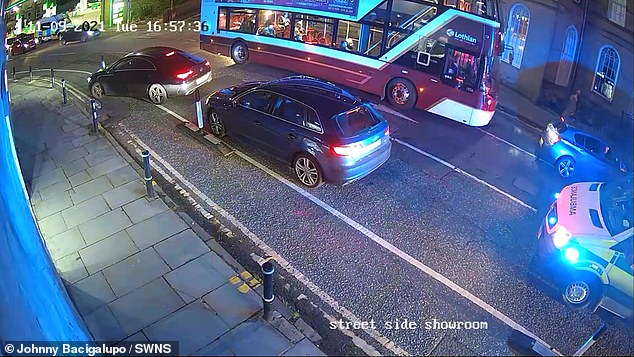 Footage shows the ambulance flashing its lights in an attempt to get through the traffic but the first car gets stuck in the cycle lane due to the plastic rods.

Traffic can only move to let the ambulance go when the first car manages to get out of the cycle lane.

Finally, the ambulance can get through after both cars have moved and it can dash to hospital. 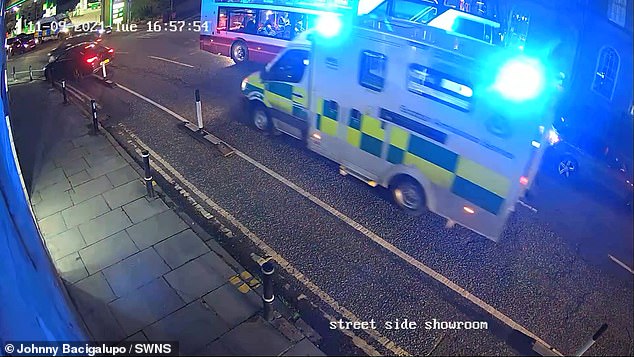 Interior designer Johnny Bacigalupo, 45, has had a business in the area for 17 years and said pollution has become so bad since the cycle lane was installed that he has problems with breathing.

The road design has caused what he called a ‘permanent pantomime’ on the street and caused congestion which was never an issue before.

He also fears for the safety of cyclists as he claims buses have knocked the plastic rods into the lanes.

Mr Bacigalupo said: ‘If you think about it, the difference in one minute is somebody’s life.

‘It’s like a circus with this 15-metre long stretch of cycle lane they installed by sheer surprise outside our business.

‘We must contact the council every ten days with another damaged plastic rod, another rubber platform that has been ripped out the street.

‘We’ve been here for 17 years, they struggle to maintain Cannonmills anyway, without them having to perpetually come back and deal with broken rods and rubber platforms, chaos outside and ambulances that can’t get past.

‘It’s one drama after another. 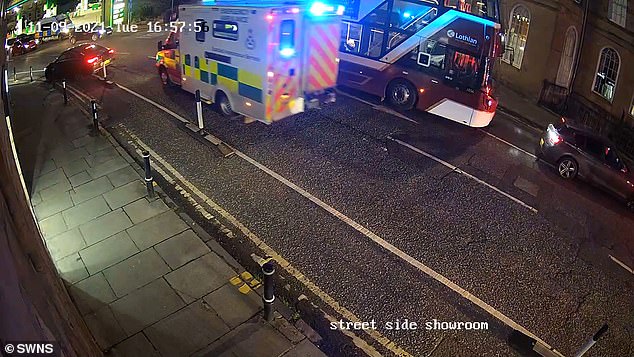 Finally, the ambulance can get through after both cars have moved and it can get to hospital

‘It’s just one tiny little stretch of cycle lane, with no lane before or after it.

‘It’s constantly sirens outside that are stuck there, I’m surprised the emergency services aren’t doing something about it with the council.

‘Where do people go, how do they move out the way?

‘This is exacerbating the problems around Cannonmills, not making it a safer place for cyclists.

‘I’ve been here for 17 years, I’ve never really seen an accident there, I’ve not heard of anyone been killed crossing the road, there has been no drama.

‘We never used to have congestion, it wasn’t a problem.

‘Since Spaces for People, now we have constant pollution outside, engines running.

‘We reported to the council that we were finding it hard to breathe in the summer, because of the pollution that was coming through the front door, because you have all these running engines.’ 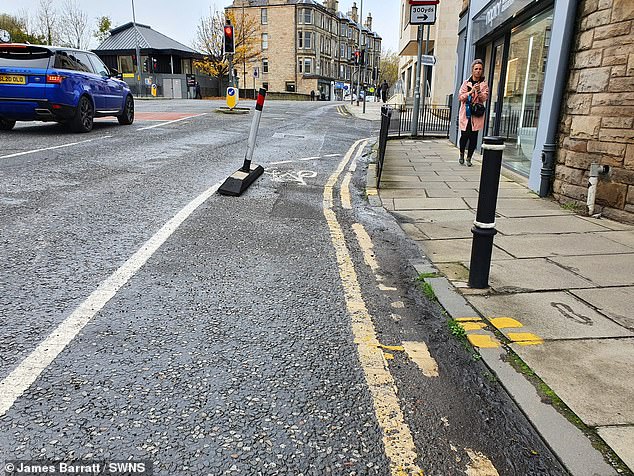 Cycle lanes on Cannonmills in Edinburgh (pictured) were installed as part of the city council’s Spaces for People project which was introduced during the pandemic to give people more space. Ithas plastic rods along it which caused a ‘pantomime’ on Tuesday evening when a car got stuck in the lane trying to give way to an ambulance

Mr Bacigalupo added that the broken rods were often seen ‘rolling around in the gullies’ of streets and compared rods being pinged into the cycle lanes by passing buses to the obstacles in the extreme Japanese game show Takeshi’s Castle.

He said: ‘There is no point having them if there is no action plan to maintain them.

‘The rods are always rolling around the street and in the gullies.

‘We’ve got Takeshi’s Castle – risk your life if you’re coming down on a bicycle.’

MFL – Scottish Ambulance Service and City of Edinburgh Council were approached for comment.