Robby Hogarth had a great idea for a new venture during our endless lockdowns. He just wishes it hadn’t attracted so many customers because when he’s busy, it means the pandemic has paralysed Melbourne again.

When the notifications go quiet, it’s a good sign for a man who has been a quiet hero for scores of Australians over the past 18 months – a fairy godmother, even. 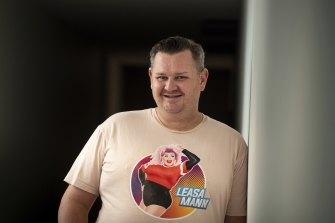 Robby Hogarth has raised money to help people struggling to pay their bills during lockdown.Credit:Penny Stephens

Hogarth’s alter ego, popular Melbourne drag queen Leasa Mann, was sitting around at home last March as the COVID catastrophe closed in and had an idea: he would use his online following to help others by paying their bills. And he would do it with no questions asked.

“It just seemed the right Aussie thing to do. When the chips are down, you’ve just got to do what you can to pick other people up,” says Hogarth, 40, who has a full-time corporate job on top of a performing career that started in Cairns more than 20 years ago.

The initial idea was simple: a post on his Facebook page offering to help pay the bills of anyone struggling. In the creative circles he moved in, he knew many people who did not meet the criteria for JobKeeper, and he encouraged everyone he knew to share his post online. From there, a beautiful story of generous hearts finding purpose in a time of crisis unfolded.

“I was doing it for a little while, and it was just paying maybe one or two bills a fortnight, whatever I could afford. And then one weekend, it just exploded. I had people from all over the country wanting to help,” he says.

Note that Hogarth says “to help”.

What he means is that just as there were people seeking a helping hand, so were there many others offering one, tapping into a widespread community desire to do something – but what?

Hogarth’s project gave them an outlet for kindness.

“It meant that we got to help more and more people, I got to keep pushing more people to come forward so that we could help pay a bill. Phone bills, electricity, bills, all sorts of things. Mainly utilities. 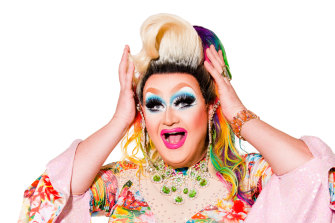 “We had one particular case where she was a nurse who had recently had mastectomies and needed cancer treatment. We put a new battery in her car and paid for the car radio so that she could get to work and work on the front line.”

The simple genius of the idea was its anonymity. Two ubiquitous online tools of the times – Facebook and BPAY – allowed everyone in the financial chain to stay anonymous if they wanted to. And given the circumstances, many did.

“The hardest part is people biting the bullet and admitting they need help and the stigma that comes attached to that,” Hogarth says.

“It’s really hard for people to think of themselves as someone who needs to ask for money and admit that you are X number of dollars in the hole. The point I try to get across is that this has no questions asked. There’s no sharing, everything’s completely confidential and the donors don’t know who they’re helping. It’s all completely anonymous.”

After the campaign was covered in a gay community newspaper, BPAY got wind of it and saw a perfect match – pairing the popular bill paying tool with a worthy charity mission. They approached Hogarth, and the result was a slick marketing campaign promoting financial literacy.

“We did a massive campaign on TV, radio, YouTube, Spotify. It was everywhere, to help people get better at paying their bills and give them a bit of financial literacy,” Hogarth says.

BPAY agreed to donate $1 for every view of the Leasa Mann financial education video to the First Nations Foundation, Hogarth’s charity of choice, which provides literacy education to Indigenous Australians. In 2020, the company gave $40,000 to the foundation. Last week, as lockdown six started to bite, it donated another $10,000 to the cause. “In these challenging times we are inspired by amazing acts of generosity such as Leasa’s, and proud that BPAY provides the common tool that is enabling generous Aussies to help others during lockdown,” the company said in a statement.

Inevitably, recent weeks have seen an increase in the number of people needing help. After a thankfully quiet period over late 2020 and into the new year, Hogarth thought the worst was over. Leasa Mann was reborn on the stage, as an MC and regular hostess at Mollie’s Bar and Diner in Collingwood.

“Thank God for the generosity of the community,” Hogarth says.

“Everyone comes forward and they do what they can to help. Some people can only donate $50. And some people can donate more than that. It’s my job to find the right donors for the right people.”

What do you miss most about life before COVID?

What is your best lockdown strategy?

Has there been a silver lining?

It’s made me realise how I want to prioritise my time after lockdowns. There are things that seem a lot more important now.