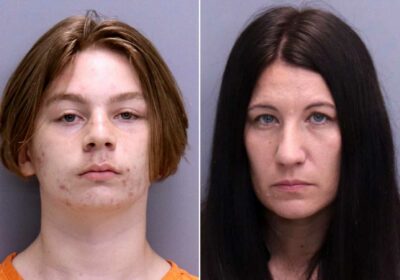 The mother of Aiden Fucci, the Florida teen who police say savagely killed a classmate on May 9, has been arrested and charged with tampering with evidence in the case against her son.

Fucci, 14, is accused of stabbing cheerleader Tristyn Bailey, 13, 114 times in a gruesome attack that horrified the nation.

Now authorities say that his mother, Crystal Smith, tampered with evidence in the case in an apparent attempt to cover up the murder allegedly committed by her son.

She turned herself into the St. John’s County Sheriff’s office Saturday afternoon and is being held on a $25,000 bond, according to a police statement.

Citing surveillance video taken during the murder investigation, a police report released Saturday states that “the defendant can be observed … going to (Aiden Fucci’s) bedroom at approximately 1255 hours (12:55 p.m., date unknown), retrieving what appeared to be a pair of blue jeans, taking the jeans to the adjacent bathroom and appeared to be scrubbing the jeans in the bathroom sink.”

Smith returned the jeans to Fucci’s bedroom about a half hour later, according to the report.

Fucci is being charged with first-degree murder and will be tried as an adult. He pled not guilty to the charges on Thursday and is scheduled to appear at a pretrial hearing on July 28.

Officials say that Bailey suffered 49 defensive wounds to her hands, arms and head and that the tip of the hunting knife Fucci allegedly used to kill her broke off in her scalp.

“Crystal Smith will be held responsible for her role in this case and justice will be served for Tristyn Bailey and her family,”  said St. John’s County Sheriff Robert Hardwick.